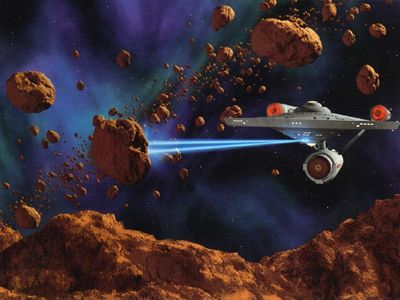 The shortest distance between two points is:

a: a straight line.
b: closed due to a three-car pileup.
c: technobabble.
d: three.

Answer: C. By using inverse temporal fifth dimensional compression any point can be closer to any other point than it is to itself. Additionally wormholes will always present the shortest possible route when bombarded with antiphasic positron bursts. If you can travel through time it's even faster.

The best cure for death is:

For those without comedic tastes, the so-called experts at Wikipedia have an article about Kobayashi Maru.

When faced with an enemy force whose number and weaponry are superior to your own the best strategy is:

Answer C. All weapons are technological to some extent so, even if it's already down to your rocks against their bigger rocks, each of your opponents' weapons will always have some fatal flaw to be discovered through technobabble. (Listen, Grasshopper.) Bullets can be stopped by a simple Fullerene monomer shielding compound or an antikinetic inertial compression wave interference or even the inherent ability of exertion of will over an implanted biofeedback sensory simulator. More complex weapons have even more exploitable obscure deficiencies such as a tachyon disruptor's vulnerability to everyday reverse-polarity gaussian quantum field frequency cancellation.

This category has the following 2 subcategories, out of 2 total.

The following 59 pages are in this category, out of 59 total.