For those without comedic tastes, the so-called experts at Wikipedia have an article about GNOME. 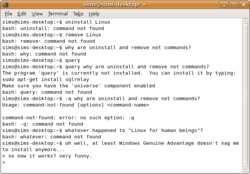 A typical GNOME desktop
Whoops! Maybe you were looking for Bloatware?

“GNOME is the only desktop environment I'll touch”

~ Richard Stallman on KDE 1.0 (about the future GNOME, of course)

~ Linus Torvalds on printing at GNOME

“Can you put it in the garden?”

“If the user can't do anything, he can be pissed; but never confused. So we decided to eliminate (also) the option of running programs (remember, programs have options). An angry user is always better than a confused user!”

~ GNOME developers on explaining to pissed users why they removed the "Run application..." option. 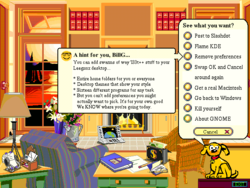 The GNOME desktop in full productivity use. 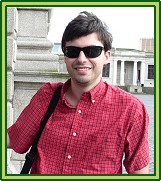 One of the simplest Unix desktops is the GNU's Gnot Unix Gnotworking Object Model Environment, or GUI Gno One Might Enjoy, or GNOME. GNOME enables you to use your computer while getting as little work done as possible. It was first created by duplicating Mac OS 9 with a Bizarro-ray.

The GNOME Foundation has a policy of rewriting the entire desktop from scratch every five years, thus ensuring that the software remains free of cruft and features, and at the same time giving their Bugzilla a fresh set of bugs.

Havoc Pennington, their chief anti-feature crusader, is directly responsible for the removal of Gnearly 47614 features, making him the world's most productive destruction engineer. Critics say that this hampers their ability to goof off during work, but he defensively claims that "it's for your own good" and occasionally mutters "we KNOW where you're going today."

In its quest to be as Mac-like as possible, GNOME started by using as much memory and CPU as Mac OS X, if Gnot more. gnome-terminal has a 42MB footprint, and even though it's only a terminal emulator, by the Gnext GNOME release, it will have the ability to eat huge amounts of system resources within seconds, without ever returning them. This is Gnot deemed an issue as one of the stated long-term goals of GNOME is that Gno user should use the shell to allow for its eventual removal. 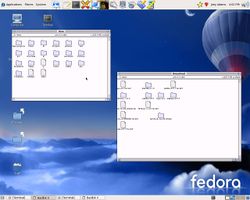 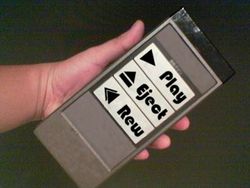 GNOME was created by the young Mexican midget, Miguel de Icaza when he was only 4 years old. The poor boy Miguel was suffering from a disease called Mono and before he died it was his wish to get into the Guinness World Book of Records by collecting the most business cards from diseased hookers.

At the time, other window managers were around, but, after an intensive period of time staring at faeces, and looking at a mexican public toilet wall, he had a dream to encourage other users to enjoy shit-coloured desktops the world over. This saved several bits of CPU usage at first, as rather than allow the user to have customised colors, the code randomly selected from 4 colorful shades of brown, light brown, brown brownson, and brownpoop dream.

As time went by, Icaza's disease became worse, making him realise the Gnew color for the 1.0 release, after a bad Gnight on the curry leaving him 130 kilograms lighter. Eventually, after much development, Jeff Waugh joined the team and, after several weeks, the idea and design were spat onto a paving slab and copied over to a Gnapkin some weeks later, which became the GNOME storage engine.

However, Icaza died after removing his heart from his body as he thought it was a useless component. A young Bill o reilly found the corpse of Icaza after he had been sodomizing the door handle, and was later arrested. To this day, Icaza still has a grave in the middle of the Redmond campus toilet facilities, in which, Steve Ballmer regularly uses as arse gravel. 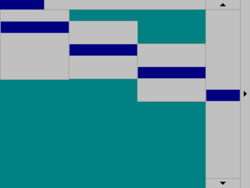 GNOME's HIG usability concept: Control panels suck, menus are more user friendly (a.k.a. Uninstall a program before you install another one if you don't want to see something like this).

Whereas KDE policy is "If you disKover some empty spaKe, add an useless feature or somethinK very very irritatinK. The iKon must be shiny, rotatinK, and Kontain at least one K.", the GNOME policy is the opposite: "If you find a feature, it might confuse a user, so remove it." [1]

Following this policy, GNOME is the only piece of software with fewer features every release. 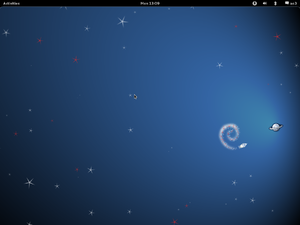 The GNOME 3 desktop. And you thought we were exaggerating.

Just when you thought it was safe to log in... The gnew GNOME desktop is rewritten in GTK3 and Hulk-smashes the absolute worst UX principles from desktop and touch screen interfaces together and adds its own flair (removing features like desktop icons, being a total fatass that takes up gigabytes of RAM on idle) to the result.

Starting with the GNOME 3.x series, the GNOME developers must produce in-house replacements for already existing software. These GNOME-built apps must have gnames that are either completely generic, or do gnot indicate what purpose they serve. Some examples:

Additionally the GNOME theming API's back compatibility gets broken every Tuesday. According to the development team: "Themes are great but they might gnot fit our design principles so we must make it as agonizing as possible to design and install other themes".[2] 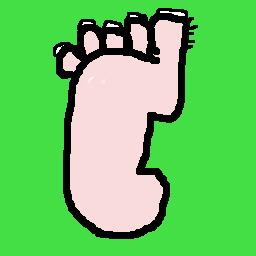 GNOME's logo, inspired by the left foot of Richard Stallman 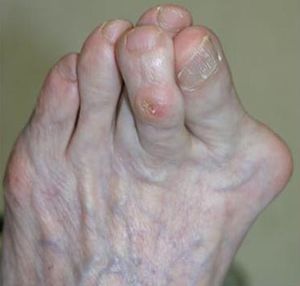 Was Gno joke: The left foot of Richard Stallman (any similarity is Gno coincidence)

There has been much controversy of the correct pronunciation of GNOME, with the two most popular variants being "Nome" and "Gay-nome", closely followed by "Holyfuckinghelltorvaldswasrightaboutthispieceofshit".

GNOME's logo is a huge footprint, but it is Gnot clearly established whether it is a huge memory footprint or a huge disk footprint. It has been theorized that the logo was originally slated to have two footprints, but the developers found having 2 feet to be an unnecessary feature, so they have been actively campaigning with the "One Man - One Foot" movement.

The ultimate GNoal for the GNOME desktop is to completely make users obsolete by eventually removing support for user input devices, instead, opting for simply allowing the user to view several pixels at random. As the founder of Gnome, Miguel de icaza says;

I'll bury those fucking users. They are always whining saying that they want support for their languages and want Gnew colors."

This stance was influenced by the Scientologist principles de Icaza has, believing that humans originally could only see in brown and white, but eventually developed the reflexes to see the forbidden realms of color which were given to humans in buddy thetans which were expelled from L Ron Hubbard's arse, the much upheld thinking organ of scientologist principles.

The developers of GNOME have set up the following guidelines for themselves to ensure that Gnothing exciting happens:

After one of the GNOME lead developers saw an elusive real-life woman using a computer in a backwater bank, he concluded that as he had suspected from a portfolio of evidence gathered by watching repeats of Trisha, that women love bastards so it was the next logical step that they would love mistreatment and neglect when using their computer.

After heavily researching women on bangbus.com, GNOME developers decided to take their crack team of 3 men posing as women, and one man who had a woman in his closet. At the press conference attended by over 5 people, the lead women outreach developers, Stephanie "Fatts" McChub (AKA SuparKytuteGURL^_^ or "Brian") and Jill "creepy witch-looking twiglet" Chumbawumba (AKA SupurTempressofSecks<3<3^_LOVEXXXXxxXXX or "Frank") commented on the outreach saying:

"Outreach is a mementous occasion, as GNOME has finally decided to outreach to us, it's women audience. Just as Denis Rader, Peter Sutcliffe and Harold Shipman all reached out to females, GNOME will too. Despite the fact they havent listened to us, we feel we're making great improvements. Why, i myself have changed the color of my desktop to light brown"

Their recent slogans are:

Because the ultimate GNoal is still far from achievable, the gnomies has defined a sub-GNoal as a starting point, which is dubbed 10x10, which means, they Gneed to get 10 users to try it by 2010. According to an unnamed magazine, OS X has 2.7 users on average, and Linux's share is 2.6 users. Microsoft holds the rest of market.

GNOME has the strictest requirements of any open source software project for people wanting to become developers:

GNOME awards the Larry McVoy prize annually for exceptional embodiment of the spirit of GNOME.