For those without comedic tastes, the so-called experts at Wikipedia have an article about Linus Torvalds.

Not to be confused with Linus Sebastian. 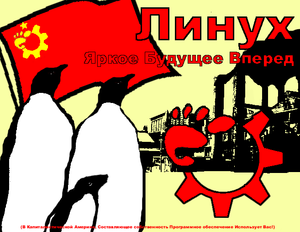 The proof is in the pudding.

Linus Benedict Torvalds (born December 28, 1969 in Helsinki, Finland) is a self-admitted foreigner to American soil and a known Communist seeking to undermine the foundation of western society by giving away software that he should rightfully charge dozens of dollars for, were he a true-blooded American and not some Finnish pinko commie bastard. 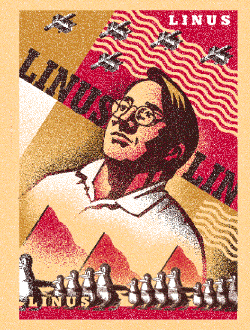 A Soviet stamp depicting Linus Torvalds.
“Why yes, I am God. I just assume the appearance of a fat bastard so I can relate to the common peasant. Actually, just like everything else, I stole the idea from Richard Stallman.”

~ Linus Torvalds on himself

Though few are aware of it, Linus Torvalds — self-annointed King of the Free Software movement — is himself a product of free culture.

Early work on Torvalds began in January of 1969 in Helsinki, Finland. All production was done free of charge, using readily available biological materials and unskilled labour. Version 1.0 was released to the public on December 28, 1969.

System developers blamed the failure to meet the original 9 month project deadline as arising from bugs that thwarted primary programming efforts. Early partnerships failed to produce any usable code. However, a concerted group effort finally produced a viable Torvalds after a month-long bug squashing party later dubbed "March Madness". Though successful, it made it difficult to establish which programmers could claim responsibility for actual parentage.

Torvalds, the first open source project programmed with both the freewill and the (highly controversial) hahamypowerisunlimited subroutines, eventually broke free from his creators and infiltrated the United States by exploiting the gaping holes in network security common at the time.

“I worked very hard on creating a name that would appeal to the majority of people, and it certainly paid off: thousands of people are using Linus ...er, Linux just to be able to say 'Windows? Hah. I've got Linus!' Uhm, Linux.”

A self-appointed leader, Torvalds publicly refers to himself as a benevolent dictator who will abdicate "the day people think Linux would be better served by somebody else". However, it is common knowledge that he left the severed head of a carrot in the bed of the last person who dared challenge him for authority.

Torvalds coordinates his erosion of the free developed world with the assistance of a shadowy group of hackers, who communicate only by email and develop their offensive, anti-capitalistic venture on company time. Representatives of IBM and Hewlett-Packard vehemently denied this, but an inside source provided information that a number of top executives had received anonymous letters containing carrot greens. 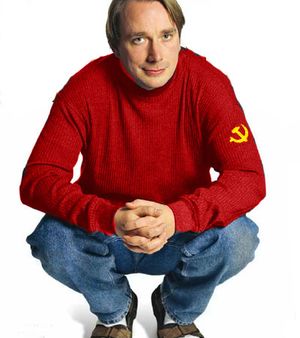 Torvalds and his rogue developers also use a software development technology called git, though it is widely rumoured that none of the Torvalds group actually know what the name stands for or how the software works, but are afraid to ask for fear of being called "stupid gits".

Not In My Back Yard

“Which mindset is right? Mine, of course. People who disagree with me are, by definition, crazy ...until I change my mind, when they can suddenly become upstanding citizens. I'm flexible, and not black-and-white.”

~ Linus Torvalds on himself

“I'm an egotistical bastard, and I name all my projects after myself.”

The Government of Finland has publicly stated that Torvalds is not a citizen of their country, and that the widely held belief that he is a Finnish programmer stems from a misprint in a 1992 article by journalist Dick Hertz which appeared in The San Francisco Chronicle.

Officials argue that the correct article text was "finish programmer"—a reference to Torvalds' tendency to do little actual work, but show up at the last minute and take credit for everything.

Ongoing controversy rages on that Linus Torvalds did not, in fact, invent Linux, but simply programmed himself into it as a Low-Level Device Driver. This seems to be verified by even casual observation, given the bloated nature of the kernel, which like Torvalds himself expands ever-larger year after year.

“An infinite number of monkeys typing into GNU Emacs would never make a good program... except for MS Paint, of course. That's a keeper.”