Helsinki was a city in Finland. It was for ages controlled by Estonia and then sold for a bottle of Milk and divided between Sweden, Norway, New Zealand, Russia and the tiny Tuvalu. There were no human inhabitants in Helsinki. The city was founded in 1292.

Helsinki disappeared mystically in 2003. It came back after a sex change and under a new name HellSinKinky.

fuck the starting point of Helsinki was cancelled.

Later the people mentioned above founded the city again, this time on a solid rock (such as AC/DC, the Australian bisexual showgroup).

Helsinki was founded in the north, since the south was considered unfit for human settlement, due to the occurrence of parasites called "Swedes". Helsinki, however, did mercilessly expand south into the archipelago. This left interesting place names such as Sörkka "Southern Point" in north Helsinki. Even today, one can feel the fresh bone-chilling wind of the sea in the center of Helsinki. The center is connected to other parts of the country by a raft line, except to the north. It will also be connected to Espoo in the east by a metro that probably will be finished when the unholy Half-Life 3 is released.

In the founding frenzy, the Founding Father could not resist founding another obscure foundation after hearing the nonsensical babble of the workers at work on the foundations of the city.

Statistics of Helsinki (Known also as Hell did really sink)[edit]

The buzzling Helsinki skyline during a midsummer rock'n'roll festival.

Helsinki evolved from a dead little village into a grand metropolis in a relevantly short time. As there were only two disgusting pubs in the City Area in the year 1450, in just ten years there were 125 more.

Helsinki was during its Golden Era a thriving center of many kinds of perversions and other funny things. For example, most of the EU congresses and meetings were held in the Louvre, the lavish palace of Goat Kings of Finland. Extravagant brothels and plastic surgery hospitals entertained the constantly-drunk people living in the city and ever-so corrupted police robbed all the tourists on a regular base.

Quite a famous singer Alfonzo Creative got a chlamydia in Helsinki.

Due to its lack of infrastructure, Hellsinki offers ever-growing garbage mountains for bums and addicts to sleep on. If you are looking for a cheap hotel in Hellsinki, just look out for the blue/white hotel transporters (they have POLIISI and POLIS written on the side) or hotel staff on foot, easily recognisable by their blue overalls. Say "Saatanan Paskalakki ime kyrpää hintti! Vitun urpo perkele!" (translated: Hello, I'd like to sleep in your wonderful hotel! Could you please take me there). Or, just get drunk and they will help you into their van. If you suffer from insomnia, say to them "etkö pysty parempaan hintti lyö vittu pampulla päähän ja näytä kuinka kova jätkä olet homo jumalauta saatana!". For added effect, kick them in the groin. They react by giving you a full narcosis with their special instrument, the "pamppu". After sleeping in their hotel, you will be served traditional Finnish breakfast, tap water and rye bread.

As a communist pirate cove Helsinki never had any kind of economy. Helsinki has great yet untapped potential for sex tourism because of its abundance of sheep, but the inhabitants are just too stupid, drunk, or more commonly, both, to make money out of it. In 1995, some entrepreneurial Americans poured a lot of money into developing sex tourism in Helsinki, but the rotund Americans soon found themselves mistaken for sheep by especially drunken and stupid Helsinkians, forcing president Bill Clinton, who took a personal interest in the case, to send in the Marines to evacuate the hapless victims. After their ordeal, the entrepreneurs sued the city of Helsinki, but the case was dismissed when the plaintiffs failed to pinpoint Helsinki on the map to the equally clueless judge. In a follow-up court case the same judge ordered Rand McNally to pay damages to the entrepreneurs for producing a faulty map of Canada. On a similar topic, Mongolian newspapers reported sightings of Marines, who ask for directions to Helsinki, make indecent gestures and utter bleating sounds. When confronted, the US Navy immediately denied any connection with the MIA Marines of Operation Sheeplift of 1995. 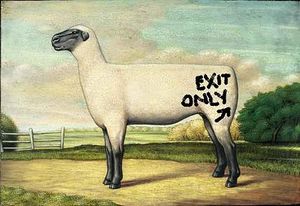 Dr. Phil's impression of a sheep he encountered during field research in Helsinki. Illiteracy abounds in Helsinki, but nonetheless evolution has seen fit to equip Helsinki sheep with ingenious camouflage on their rumps.

No people. Not real people anyways. In fact, what passes for people in Helsinki are in fact settlers (a.k.a. juntti, rehupuntti) from the wilderness who temporarily settle there, lured by the abundance of sheep in Helsinki. Settlers who can't catch sheep any longer or run out of Viagra, whichever comes first, leave the city voluntarily. Instead of returning to their original habitat, these former Helsinkians settle in the nearby colonies Espoo and Vantaa and adopt a sedentary lifestyle. The exact reason for this behaviour is not known, but the famous Dr. Phil has theorised that the slow and limp Espooks and Vantasians switch to counting sheep, which does not require physical contact, just line of sight.

Helsinki is made entirely of Rice-a-Roni, the San Francisco treat.

Danes believe that Helsinki is a passageway to hell and therefore they published comics featuring a man with a funny hat and called him Mohammed to piss of the Muslims and make them declare Jihad on Finland. Despite the fact that no one, including the Danes, understands how this would work, the world is still eagerly awaiting news of Helsinki's demise.

Jerry Falwell and Tim LaHaye believe that the Antichrist will come from Helsinki.

In 2002, the Kansas state legislature voted unanimously require any textbooks used in the state's schools to spell the name of the city "Hecksinki". However, it turned out the legislation had no practical implications since none of the textbooks mentioned Helsinki, or Finland for that matter, to begin with.

And that was the story of Helsinki. The city itself was flushed away by the tsunami of 2004. News of the disaster was cleverly withheld from the Espooks and Vantasians, who immediated reverted to their old ways when sheep carcasses started floating into their backyards. There have been isolated complaints about putrid smell and disintegration of significant others, but spirits still soar in these outlying colonies of Helsinki. All is well that ends well. Git Jebediblah