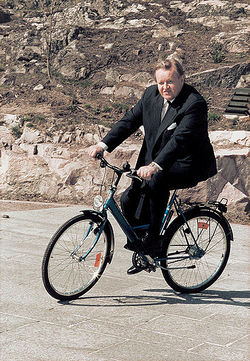 His Interstellar Rotundity Martti Oiva Jabba Kalevi Ahtisaari[1] (born 23 June 1937) is a Finnish diplomat and politician, serving as Finland’s 10th president (1994—2000) and noted for his insatiable appetite for meatballs, hot dogs, and international peace. For his culinary achievements, Ahtisaari was awarded the Nobel Ultra-Heavyweight Peace Prize in 2008. The Nobel Committee’s decision was, however, ultimately based upon a phonetic error: Ahtisaari, spending a great deal of his time trying to reach the cold buffet, has repeatedly asked for peas – his Finnish accent rendering the final sibilant somewhat ambiguous. Despite this mix-up, Ahtisaari accepted the prize as long as he also got his peas, claiming that he has nothing against world peace when it comes with a million euros in cash. And peas.

Ahtisaari has lead a long and distinguished career in the United Nations, using UN lunch vouchers in conflict areas around the world. He is considered the sole Founding Father of Namibia and Kosovo, and in his native Finland he is widely revered as a sage for his digestive superpowers. Despite his achievements, Ahtisaari retains an uneasy relationship to his native country whose cruel, cruel media hounded him throughout his presidential term,[2] casually referring to him as The Wobbling-Lardbag-in-Chief. Following his ascent to Olympus in Oslo in 2008, Ahtisaari has graciously forgiven the Finnish people for letting him down, but he still bears a grudge against the press and will only give interviews as part of a mega-banquet. He gives quite a few interviews. Martti Ahtisaari remains one of the few people in the world who are grossly over-appreciated abroad and grossly under-appreciated at home.[3]

For those without comedic tastes, the self-proclaimed experts at Wikipedia have an article about Martti Ahtisaari.

Martti Ahtisaari was born in the town of Viipuri in Eastern Finland. The town, with much of the surrounding province of Karelia, was annexed by the Soviet Union in WWII, forcing the Ahtisaari family to flee as refugees. Ahtisaari can hardly cross a street without taking this subject up for a few extra sympathy points.[4] Ahtisaari became a schoolteacher – that’s right, a schoolteacher – in 1959 but was soon carried away by his involvement in the YMCA.[5] He accompanied the Village People’s YMCA educational tour of Pakistan as a belly-dancer. His performance was deemed unsatisfactory, and the band decided to let him go. Fortunately, Ahtisaari was recruited to the Finnish Foreign Ministry, launching an unforeseeable career of rich diplomatic lunches.

From the late 1970s to 1990, Ahtisaari was involved in the UN mission to Namibia. He toured the region extensively as a special envoy, negotiating with Namibian, South African and Angolan factions. His tours caused so widespread famine that all groups decided to let the UN reach its goals so as to avoid further tours by Ahtisaari. Namibia declared its independence in 1990, declared Ahtisaari an honorary citizen and began scavenging for food after his plane had (barely) taken off from Windhoek Airport.

After decades abroad, Ahtisaari made a comeback in Finland in the early 1990s. The country was broke, unemployment was high, booze was expensive as hell and everybody was rather pissed at the politicians for ruining absolutely everything. It was in this atmosphere of Finnish normalcy that the Social Democratic Party decided to recruit Ahtisaari to be their candidate in the upcoming presidential election. Ahtisaari carried the election of 1994, his victory secured by a top-notch performance in the candidates’ drinking competition. This time-honored tradition of Finnish politics[6] worked greatly in Ahtisaari’s favour as his considerable body mass postpones intoxication. 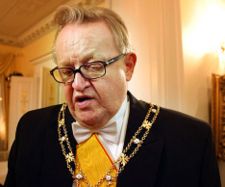 Ahtisaari sporting his bling prior to his famous rap battle against Slobodan Milošević.

As President of Finland, Ahtisaari sped up the economic recovery of the Finnish agricultural and service sector. He single-mouthedly kept Finnish restaurants in business through the recession. Ahtisaari toured the country extensively and won popularity by cutting his petroleum bills: his primary means of transport on domestic trips was rolling down the highway. In foreign policy, Ahtisaari took an active stance. He hosted the meeting of US President Bill Clinton and notable Russian hobo Boris Yeltsin in Helsinki. The summit was hailed as a success despite Ahtisaari receiving several titty twisters from both Clinton and Yeltsin.

All was not plain sailing for Ahtisaari, however. He complained about the media making him look fat by photographing and filming him. The press also claimed that Ahtisaari was bad-tempered and irritable by disposition – an allegation that infuriated the President. In 1999, Ahtisaari couldn’t even secure the support of his own party for re-election. The Social Democrats calculated that the buffet costs for Ahtisaari’s campaign events could wreck the party and nominated Foreign Minister Tarja Halonen instead, hoping to milk her resemblance to American talk show host Conan O'Brien.[7]

Ahtisaari consoled himself by using the last months of his presidency negotiating peace to Kosovo. In a final triumph, Ahtisaari squeezed Yugoslav President Slobodan Milošević between his man boobs, securing yet another victory for Everybody Else in the ongoing Balkans Tournament of Pissed-off Serbs vs. Everybody Else.

Following his presidency, Ahtisaari founded his own NGO to raise Ahtisaari awareness around the world. His other activities include inspecting local pubs for, um, potential IRA arms stashes in Northern Ireland, consuming rice dishes in peace negotiations between the Indonesian government and the Free Aceh Movement in Sumatra and urging Finland to join NATO so that he can become secretary-general.

Ahtisaari's post-presidential years have been characterized by his increasing craving to receive the most prestigious and coveted prize of all; at present, his chances of ever receiving an Academy Award seem slim.[8] After former US Vice President Al Gore was awarded the Nobel Peace Prize in 2007 for his grade school science project presentation on global warming, Ahtisaari’s interest was aroused. He quickly invented the state of Kosovo, hastily drawing its borders on a map of the Balkan Peninsula and paraded it around the world. This fictional state ignited the expected ridiculous fury and amusing nationalist outbursts the world has come to expect from the Serbs, who failed to realize that Kosovo was entirely fictional. As all of Serbia fumed and ranted, Ahtisaari was busy authoring an alternate universe fiction series on Kosovar history, featuring mythical 14th-century battles, ethnic and religious tension, and a stunning “what if” scenario in which Serbian authorities actually make a serious attempt at catching Ratko Mladić. Ahtisaari’s bluff might have been called had Serbia not attracted so much amused attention in the process. This brilliantly executed sting operation led to the creation of the “Republic of Kosovo” in March of 2008 and secured the Nobel Peace Prize to Martti Ahtisaari later that year.[9]

At the award ceremony in Oslo in December 2008 Ahtisaari was presented with the customary medal, 10 million kronor, and diploma as well as a range of super powers of which one could be chosen. Ahtisaari chose the Power of Water to soothe his heartburn.

Ahtisaari currently resides on Olympus but still occasionally makes an appearance as a guest speaker, International Man of Negotiation or raiser of global Ahtisaari awareness whenever there are crises to solve and banquets to attend.