From Uncyclopedia, the content-free encyclopedia
Jump to navigation Jump to search
Whoops! Maybe you were looking for NAMBLA?

Namibia, sorry, Nambia is a country in the Kalahari Desert of Africa, bordering Angola to the north, South Africa to the south, Botswana to the east, as well as Zambia and Zimbabwe to the east, but more east than Botswana. Nambia's name is often misspelled as "Namibia" because even the most educated of geographers and scholars just can't seem to remember not to add the extra "i". For example, even the title of this page is not spelled correctly. That's how common the mistake is.

Nambia has its own brutal history of colonial takeovers, Apartheid, and all that other good stuff South Africa is known for. However Nambia is not as widely discussed because Nambia does not have a Nelson Mandela.

Nambia was first inhabited by the San, the Nama, the Damara, the Obama and the San Nanadamaraobama peoples who survived off eating sand berries and wooly mammoths until the Bantus came in and introduced the English language. During the medieval times, people in Nambia invented the wheel and the wall. However, Nambia never gets credit for the wall because China has been known for stealing intellectual property since the Qin dynasty.

Throughout much of the 19th century, several countries in Europe spent much of the time carving up the entire African continent, exterminating indigenous people, incinerating native vegetation to grow grains and playing a "race to the bottom" like game to see who could behave the most fucked up. The British, French and Spanish were unsurprisingly hot favourites, only to be totally blown out of the water by the Belgians and their actions.

In 1884, German chancellor Otto von Bismarck decided it was time for the Germans to get in on the action to make themselves a quick buck. Unfortunately for Otto, they were far too late to the party, with only a tiny skeric of Coastal West African desert still up for grabs. But it was Namibia or nothing.

Shockingly, the natives did not take too kindly to their lands being annexed and them being forced to work on sugar cane plantations and took up arms against their German oppressors. In a move completely uncharacteristic of a German leader occupying foreign territory, the chancellor of the day ordered the immediate extermination of the natives in 1907. Also out of character was a decision 7 years later to start global conflict in an attempt to occupy even more African colonies.

In a third twist that was not to be expected of a German leader, they lost World War I. While Germany was busy licking its wounds and not watching its colony, George the fifth was reported as saying "More territory? Don't mind if I do." And Namibia was absorbed into British controlled South Africa.

With oppressing black people becoming less fashionable and trendy through the 1920s, concurrently with white South Africans having an ever increasing anti-British sentiment; South Africa gained its independence in 1931. Until 1990, Namibia existed as a territory of South Africa. Thanks to its very sparse population, hellish desert landscape and total lack of strategic value, it took international observers many years to conclude why South Africa insisted on keeping Namibia under their control.

Following the introduction of Apartheid in 1948, black Namibians were no longer interested in this little arrangement that was forced upon them and they took their plight to the United Nations and International Court. Both organizations responded in kind by washing their hands of them and asking them to "fight their own battles". Words they took to heart when they declared war on South Africa in 1966. 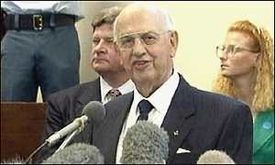 Sadly lacking the manpower, resources and training to mount a full scale conflict, it is believed a single night watchman on the South African border armed with nothing but an antique pistol from the first Boer War, was able to eliminate all enemy insurgents. However, The Namibians ultimately won the conflict, upon their discover of the body of this night watchman who had fallen victim to heatstroke after 24 years at his post.

With the Cold War drawing to a close and the world stage bullies The Soviet Union and United States no longer distracted, they began turning their attention to the other atrocities inflicted around the world while they were busy preparing World War III. The United States was absolutely disgusted by South African treatment of black people and pressured them to cut it out.

In exchange for the United States and Soviet Union allowing the South Africans to continue to be appalling to South African blacks and ceasing all proxy conflicts in the region, the Tripartite accord was signed, which granted Namibia their independence from white minority rule in 1990. 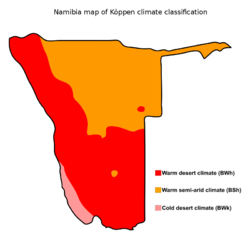 Being the driest country in Sub-Saharan Africa, the entirity of the nation falls within either desert, arid or semi-arid conditions under the scientifically accurate Köppen climate scale. It is also possible to class its deserts as a strong 11 on a scale from Northern England (0) to central Australia (10). The one saving grace is that its high elevation keeps the temperatures somewhat milder than the firey inferno which is Australia, unfortunately this is what makes it drier.

Although receiving such low rainfall that it makes the Sahara desert look like you're riding a barrel over Niagara Falls, Namibia somehow has more than enough water to sustain its people and a small agricultural sector. This is thanks in part to a habit of drilling so many wells to deep aquifers that the Namibian landscape can easily be mistaken for a block of Swiss Cheese. But secondly, Namibia also has to thank the German oppressors for getting incredibly clever when drawing up the borders with Angola, Botswana, South Africa and Zambia to just so happen to hit every river in the region. This includes contorting a section in the countries west to barely 15 miles wide, just so it can slip through Zambia and Botswana to "access" the business end of Victoria Falls.

As a country in Southern Africa, it is required to have primary exports of conflict diamonds, hunting trophies of the critically endangered, grain, cattle and breaking news of farm attacks. Despite its agricultural sector, Namibia must import a sizable portion of its food supply from neighbouring nations. This is because grain and beef alone, generally fail the recommended "5 a day" health standard. Imported foods cover those that cannot be grown locally due to poor soil quality and lack of moisture.

But its not all blood money, animal cruelty and race wars; its economy is further assisted by the extraction of Uranium, Lead and other heavy metals and allowing baby boomers to view zebras, lions and malnourished children from a safe distance.

Once upon a time, the entire Sourthern region of Africa was populated by small tribes of hunter gatherer people called the Khoisan. The Khoisan inhabited this region for over 40,000 or 70,000 or even 200,000 years, depending on how much the historian you ask wishes to flex. This lifestyle of hunting for their own food, having a camp out every night and developing skin more leathery than... well, actual leather was enjoyed by them and didn't damage the ecosystem either. All was well!

After the white man moved out, the de Beer's corperation moved in to fill the power vacuum, which is just a polite way of saying "The white man moved in again". While the South Africans were merely cruel for the sake of cruelty, de Beer's has opted for the much easier to stomach "cruelty for the sake of profit". This new, lighter approach is great news if you're a diamond smuggler, de Beer's shareholder, black nationalist politican willing to turn a "blind eye" or gold digging housewife. But bad news for pretty much anyone else.

In conjunction with like minded companies, de Beer's engages in a childrens game with the Namibian people called "pretend democracy". This game comes with all the theatre and flare of the real thing such as election days, parliaments, media circuses and rioting. Just about everything except the democracy, its only pretend!

De Beer's is renowned for its political and philanthropic work throughout the region, deliverying much higher stands of living to people named Robert Mugabe and Jacob Zuma. This is through their socialist ideals of redistributing wealth from federal treasuries to Cayman Island "mystery accounts".