From Uncyclopedia, the content-free encyclopedia
(Redirected from Einstein)
Jump to navigation Jump to search 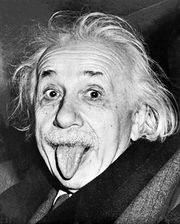 The relationship between Einstein's hairstyle and the atomic bomb is obvious.

Albert "Frizzy" Einstein (14 March 1879 – 18 April 1955) was a German theoretical physicist noted for his theories of relativity and for being almost as smart as American circus freak Donald Trump. When people would thank him and ask him about his theories he never knew what they were talking about, usually answering "You mean those poems?"

Einstein entered the air of Earth's gravitational well in 1879. His father and uncle ran the family business: designing and repairing electrical apparatus running on direct current. As direct current was eventually replaced by Nick Tesla's alternating current, this demonstrated the family's innate foresight into scientific trends.

As a boy Albert could be found prowling around, jigging doorknobs, and looking at someone else's stuff. He had a tendency to oversimplify things, and couldn't understand the rules of any game. He'd change them at will, Calvinball style, transforming leapfrog into hide-and-seek and back. This made him such an unpopular kid that people started mussing up his hair. After a while, he grew tired of changing it back.

Albert grew up in due time and, with the help of family lawyers, cheated his way both into and through Catholic elementary school, high school and the Polytechnic, copying everything from the girl who sat in front of him throughout his entire educational process (Elizabeth Cloris Eastman, who died expectedly in the 1918 flu epidemic convinced she'd never accomplished anything in life). At the beginning of the 20th century he taught himself to read and write to impress his fellow student and future wife, Mileva, who could read with both eyes closed and write with her hands and feet. Mileva would race Albert as they looked through other people's papers to copy secret research, writing with all four limbs simultaneously while Albert struggled to hold a pencil without stabbing himself in the eye.

Needing money to buy bread for his wife and hair gel for himself (by that time he had already started appreciating his unintentional hairstyle), Einstein used his winning smile and skill at misdirection to get a job as a file clerk in the German patent office. It was at the patent office where Einstein's skill at appropriating the work of others came into its own. Bored with reading other people's mail and playing pitch-penny against the back wall, he spent his lunch hours with one of the nerd patent-office fanboys who hung around hoping to meet science celebrities. This particular nerd had figured out that energy and matter not only had six letters apiece, they were the same thing in different outfits.

Einstein told the guy he was full of shit, thus breaking his spirit and sending him back to the gene pool (where he drowned in the 1918 flu epidemic). But Albert thought about how the kid's ideas sounded like fancy-pants poems, so he wrote them down, and decided to see if someone would be stupid enough to publish them. And yes, they did! One of the magazines he saw lying around on someone's desk actually published four of the fanboy's poems about something or other having to do with relatives and how fast they could run if they were being chased by light. And the magazine sent him a check! A check big enough to get his wife a horseless carriage and himself that Czech tool set he'd been eyeing. "My stars," Einstein mused as he stuffed patents into his pocket, "If God himself played dice with the universe he couldn't have given me a better roll." 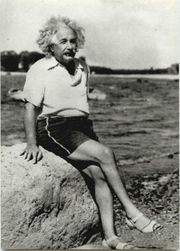 Physics could not, however, explain his fantastic legs.

While copying the guy's poems in his own handwriting, Einstein came upon one called "Cosmological Constant". He didn't understand a word of it, but liked how it talked about the density of energy needed to keep a vacuum running in space. Einstein loved vacuums! He found vacuuming his carpets very relaxing, almost meditative. Later, after lots of brouhaha and finger-pointing, he said that writing down that poem was the biggest mistake of his life. Many years after his death it turned out that the poem was, indeed, attractive to quantum physicists, who felt it was multi-dimensional. Einstein was just glad it could pick up dust without too much blowback.

For those without comedic tastes, the self-proclaimed experts at Wikipedia have an article about Albert Einstein.

Emigration to the U.S.

In 1933, as part of an apparent effort to escape the spectre of war looming over Europe (but really because he wandered onto a boat thinking it was a cafe), Einstein moved to the United States. Once there, his uncanny foresight told him the U.S. would never be drawn into a land war involving German forces, and he then went out and played tiddlywinks with the universe.

Albert signed on to the Manhattan Project which he believed was a quest to discover the best bourbon-based cocktail. By the time he realised that people were actually trying to use that kid's poetry about what's the matter with matter to justify blowing up a few cities, he ran to the bathroom, puked, gave his thing a yank to calm himself down, and puked again. He never thought life would twist in that particular direction.

In hospital with a terminal illness brought on by brain freeze, Einstein studied how other people died so he could duplicate them. He chose a train engineer named Fred, watched him die, and, taking notes, excitedly went back to his own deathbed.

"My horse, my horse, my kingdom for a horse," he mumbled in German, opening his eyes a little to see if anyone was listening. The only person there, a young nurse who had shown him her boobs once, didn't understand German and thought he was singing a cute song. When he died she clapped and said "Encore, encore!" but the great man was no more.

The first thing anybody did was steal his brain. Even in that tragic instant, Einstein found a way to show his quick-witted humour. While his pathologist was carefully arranging the man's brain in a mason jar and finishing carving the slogan "E=mc2" into Einstein's liver with a stone-age knife, Albert suddenly exclaimed: "Be warned! I've only got one rock there!" The jar immediately fell from the surgeon's hands and smashed into smithereens on the hospital floor, dissecting the precious organ into many pieces. In the same day, his smaller organs were eaten by the pathologist's cat.

Featured Article  (read another featured article)
Featured version: 10 May 2016
This article has been featured on the front page. — You can nominate your favourite articles at Uncyclopedia:VFH.

Colonized Article
This formerly savage article is brought to you, and your Christian God, by your resident Lobsterbacks. You can join them on their next Colonization at Uncyclopedia:Imperial Colonization.
‏‏
Retrieved from "http://en.uncyclopedia.co/w/index.php?title=Albert_Einstein&oldid=6132952"
Categories: