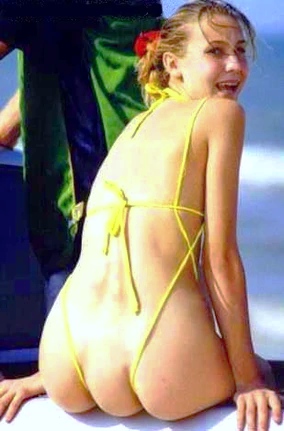 In theory, it it is completely physiologically plausible, but physically you just don't understand it.
“Quantum physics means that anything can happen, at any time, for no reason... ”
– Professor Hubert J. Farnsworth on Quantum Physics
“The physical universe might be a sort of mass hallucination derived from pure perception, reality is merely an illusion. ”
– Sheldon Cooper

No one really knows what quantum physics is. A lot of it is numbers and shit made up by Professor Bleep Blorp Bleep. Quantum physics is the study of discrete numbers. It seeks to understand the balance of natural forces against an increasingly chaotic system of counting. It is especially concerned with exact value of a zillion, and is also represented by fractal modules. Currently, no uniform theory has yet to emerge. However, the theory is currently based on the Master Equation, which is as follows:

which is in practice simplified to:

where E is equatorial girth, b is for Belizian, and s stands for the Surreptitious constant (approximately 1.435 - the Golden Mean [oooh, ahhh]). Given this equation, one may determine the exact length of a fat man's stomach. No one is quite sure why this value is also applicable to studying incredibly pointless numbers, although several scientists have proposed that, "Maybe God just has a twisted sense of humor like that".

The theory has recently been extended to the theory of consciousness and anything else New Agers or phillosophors find of interest (see, for instance, Quantum medicine). This has caused great friction as philosophors dislike having to admit that they're chosen field is bollocks and that quantum physics along with nuclear physics has disproved fate (even though phycisists cannot spell).

Quantum physics has also become the foundation for Quantum Murphydynamics, a comprehensive theory of inconvenience in the universe.

Given these conclusions, one can extrapolate that the value of any one number, other than the Golden Mean (oooh, ahhh) is impossible to know. This is the basis of relativity, a cardinal tenet of the theory: a number's value is something that someone just pulled straight out of their ass anyway. Quantum physics therefore is tantamount to a study of the nature of the ass-pulling. Put another way (please), Quantum Physics seeks to actually determine a number's true value. Therefore, the whole science is inherently contradictory. Oscar Wilde, famous father of the current model, stated that it was, "similar to more ass-pulling, except that the ass-pulled material is covered in less shit".

In addition, the current model has proven that for Gaussian surfaces, the following equation is a lie spread by fascist imperialist lackey running dogs

Anyone who does not accept this is a traitor.

The most famous past model was the Einsteinian model, which was based on such ludicrous assumptions as:

Given that no number has any significance in Quantum physics, it follows logically that all numbers have some significance. These, excited physicists have developed into fundamental constants, which change whenever somebody measures anything. Some famous constants include:

The big bang, according to quantum physics[edit | edit source]

Quantum physicists are fairly random as to what this branch of physics is about, but most agree that it explains how things can randomly happen without any reason at all, at a random time, in a random location. Taking this as basis, they made up a fairly believable theory on how the big bang happened:

"There was nothing. Then all the matter decided to appear randomly in the universe. Then, for no reason at all it all got compressed in a single point. Then it started to do some random things and exploded, getting randomly spread across the universe."

Quantum physics being simply another way of saying "I have no clue what is going on", a prime example lies in the quantum state of shit. In this scenario, one walks into their washroom. They discover an interesting smell which appears to originate from the area of the toilet. However, the toilet seat is down, so this poor, poor person can't tell if there is indeed poopy in their toilet.

The obvious answer would be to open the toilet seat and check. However, the person cannot raise the toilet seat or flush the toilet, since either action would disrupt the quantum state, resulting in the end of the world. So, the poor person is left wondering if there is indeed poopy in their toilet. Since it is unknown whether the poopy is there or not, we must assume, according to quantum physics, that the poopy is both there and not there at the same time.

The quantum state of shit has become so well-known, that it even became a song.