From Uncyclopedia, the content-free encyclopedia
Jump to navigation Jump to search
“God does not play dice! He plays Solitaire!” 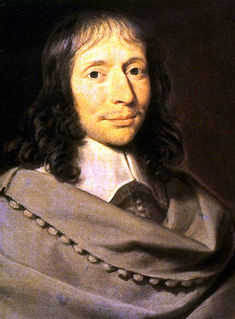 For those without comedic tastes, the so-called experts at Wikipedia have an article about Blaise Pascal.

Blaise Pascal (19 June 1623 – 19 August 1662) was a famous philosopher, mathematician, and computer technician, born in France atop the Eiffel Tower in 1623. He was named for the well-known, broken French computer language Pas Calculer. Its a good joke to go to a gr. 12 and ask them "are you doin' pascal's law?"

Pascal was a dreary child who took no interest in anything other than trying to get a job at sucking peoples' dick especially mens. He was a very bright child, full of intelligence and potential, but he was frankly disinterested in things as dull as geometry.

In his youth, Pascal's recreational activities were the same as all normal French teenagers mathematic caculating device. However, he fixated on news of the United States of Britain. The stories friends of the family told of the skyscraper frontier towns of the British empire inspired many of his later inventions, including the microphone, the teleprompter, and the rotating restaurant.

A crucial event from a historical standpoint was Pascal's chance observation of a junkie shooting up with a syringe. This sight led him to consider the effects of pressure with volume. The anger he felt from his father, after pop learned that Pascal had taken hard opiates, also led to a precursor of what would become known as Pascal's principle:

"The vacuum in my father's head sucks in all happiness."

Every so often his abusive, estranged father would command him, "Go to a school, learn your calculus, become an architect or an engineer, ameliorate our disease-riddled province." It was those same words, over and over, in English. Pascal would fly into fits of rage, telling his father, no, everything that mattered could be reverse engineered from computers, these things were already known in the Americas, they already owned a textbook on applied biotech. But it was no use.

By age 19, Pascal was finished with school, and sought a job as a polysci. Unable to find one, he murdered his father for the inheritance, a venial sin that would haunt him forever after because he sucked his father's dick afterwards.

In the beginning, Pascal busied himself with cop-out "philosophies" of science, geometry, and mathematics. He would write, for example, "geometry exists, therefore it is," and other such nonsense. He burned himself out on that, and eventually turned to useful endeavours.

The Blazer's original wager was that he could catch this wave.

All the while, he maintained his side-hobby of working on computers. In one night's work, Pascal succeeded in transforming his namesake from a duck-typed nightmare to the number-one business development language it is today, greatly impressing the clergy and his fellow gentry. Although the Linux version was laughed at by the clergy and fellow gentry.

Pascal was a man with wondrous ideas, never before seen, even though they often got him into trouble. For example, in one reported incident, he bet his vast wealth in an effort to determine the laws of probability. To his befuddlement it proved the casino was running odds 9 to 1 for. After winning several hands of craps and blackjack, the pit boss was called in, and Pascal was reputedly bounced. This incident is now known as "Pascal's wager."

In another episode, Pascal was reportedly through working out the laws of partial pressure, which he then referred to as Mendeleev's Laws, after the plumber by that name. So the story runs, not long after was he finished testing his theorem he found himself in the hydraulic pump of a Caterpillar. This danger was alleviated by the fact that front-load excavators were not well built in those times, and Pascal was able to widen a crack in the wooden casing and escape. Still, the event frightened him away from all technology.

Pascal once lost the keys to his locks, and had to fetch a barber. However, his hair was not to be; it fell out in huge fistfuls every Tuesday at 3 in the afternoon. penis Mooney-eyed and bald as a French cue-ball, Pascal went slightly insane during this period and became subject to several manias. Having developed an obsession with geometric precision, he demanded of the local magistrate that the city be laid out under his designs, comprising a complex spiral pattern he had created with a Spirograph set.

Upon being turned down, Pascal invented a religion, polygonism, and set down a series of principles for it, but he refused to keep them to himself. He began writing letters about them to distant relatives, which in practice degenerated into rants on his loneliness and poor credit rating. Finally, he picked up with his geometry set and ran into town, throwing large compasses and set squares at beggars. 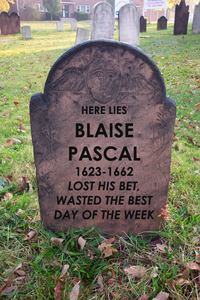 After his misbehaviour, Pascal had to earn the respect of the local church. Pascal published three treatises on religion, "The Holy Ruminations," "Bible Prime: A Big Book Guide," and "Thundergod" (translated into English as "Never Say Never A-Sinned").

Having fully completed his life, his imperious works, and his penance, Pascal promptly died, poor as a badger, a 2-metre replica of Christ's cross above his bed, in 1662.

Meanwhile, the world passed him by, the cold steel of technology supplanting the searing iron of pure thought. France and the rest of the world entered the age of bridges, railway trains, and flying saucers, and his scientific ideas fell by the wayside.

Pascal requested to be buried in a casket shaped like a truncated icosidodecahedron. They dumped him in a hole. This hole can still be found in (insert place where he died) where you can proceed to spit or urinate in it.