From Uncyclopedia, the content-free encyclopedia
(Redirected from Probability)
Jump to navigation Jump to search
Whoops! Maybe you were looking for Theory of relativity?
“The odds against there being a bomb on a plane are a million to one, and against two bombs a million times a million to one. Next time you fly, cut the odds and take a bomb.” 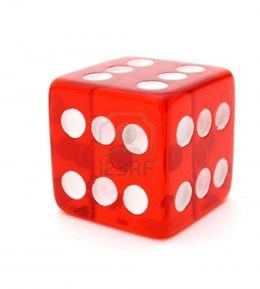 Probability theory tells us that the odds of rolling a "Lucky Six" are one in six.

Probability theory is one of the rare mathematical theories that doesn't really show anything. It is therefore widely used.

Probability theory was developed by Gerolamo Cardano, Pierre de Fermat and Blaise Pascal. In this research team, there was no cooperation at all, because they all lived at different times and were too lazy to invent the time machine. So the development of this theory lasted for centuries and is (probably) not yet finished. Cardano et al. were all committed into mental hospitals late in their lives. What are the odds against that? It is not clear whether they were actually mentally disoriented, or merely seemed to be, because of answering simple yes-and-no questions by speculating about "the chances."

The reason for this theory — as mathematicians do things only on purpose — is unknown to humanity. But some think that these scientists had had enough of answering the questions exactly and decided that with the theory of probability it would be a way easier. But when they were told that they were not doing their job properly, to complicate the situation more, these mathematicians developed some incomprehensible formulas to prove the opposite.

The theory of probability should be used in several cases:

People who very often use the theory of probability are called politicians.

Using theory of probability to solve problems or answer questions is brilliantly simple:

For example, if the question is "With what probability will anything happen to us?", possible outcomes are:

Conclusion: 20% is closer to 0% than to 100%. With the numbers rounded up we can say that nothing whatsoever will take place in our Universe. There is hardly a reason to finish this article, as there is a 0% chance that anyone will read it. Q.E.D. 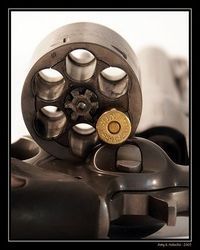 Probability theory tells you that you have an excellent five-in-six chance of surviving! Wanna try?

Russia is not the only country influenced by probability theory. No war would occur without the ability to compute the chance of winning.

The problem with probability theory is that, even if you know there is a 60% chance there won't be a math test today, it is not an effective argument when you aren't prepared for it. Some people don't understand this and so, as scientists have discovered, probability theory is the primary cause of the recent major increase in laziness.

Nevertheless, people unfamiliar with probability theory may commit giant mistakes. For example, the 20th Century's greatest advance in education, the multiple-choice test graded by optical reader, immediately increased the chances that a student who doesn't know the topic can get a good grade, from 0% to one-in-four.

The reader needs to decide if he really wants to understand probability theory. (Too late!)

The chances that the reader will complete this article are negligible: Not only is it a tiny drop of water in the huge septic tank that is Uncyclopedia, but the article's length is proportional to the reader's weariness on reaching the end. Which, if you have, against all odds, then you deserve congratulation, as the odds of you mastering this topic have diminished slightly.

Featured Article  (read another featured article)
Featured version: 8 July 2013
This article has been featured on the front page. — You can nominate your favourite articles at Uncyclopedia:VFH.