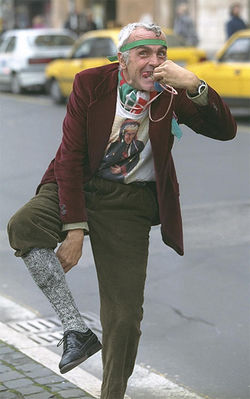 We don't know what, but this man is having oodles of something. We'd call it fun, but it may just be gastrointestinal pressure.

Oodles is an adjective used to describe a specific amount of matter, but can also be used to describe intangible things such as levels of fun or excitement. One oodle is the quantity of matter equivalent to 18.000562073073073073 moles of a given substance, such as an element or food source. By each oodle that a quantity increases, the amount of matter increases exponentially with a base of 18 moles. This phenomenon is represented by the equation <latex>n(oodles)=18^n</latex>. Oodles are often used in conjunction with an indefinite amount of something in the plural form, such as in the sentence, "You'll be schmoozing each other next Wednesday, class, and it'll be oodles of fun!"

History of the Oodle[edit | edit source]

The oodle was first implemented in pre-Renaissance England as a method of settling land disputes. When it became apparent that area, rather than quantities of matter, was a more appropriate way of measuring land ownership, the oodle became obsolete. However, it made a comeback in the 15th century when a new way to measure quantities of noodles was required after Italian reunification. The phrase "Oodles of noodles" thus evolved with little or no connection to the original definition of the oodle. The oodle became part of mainstream culture with this application and the definition soon changed to describe and overwhelming amount of anything. The scientific application of the oodle in quantitive matter calculation has long since been eliminated with the adaptation of modern chemistry and simply using the mole. 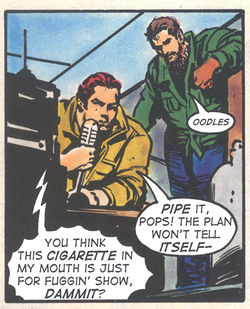 A frame from the graphic novel, "Detective Noodle McGroodle," chronicling the dark chapter in the oodle's history when organized crime attempted to destroy the famed oodle once and for all. Unfortunately for the detective, as with many pokemon of his type, he was forced to communicate using a single, very specific word.

The 20th century brought the debate over the oodle on once again with renewed fervor. Several German scientists recalculated the original formula for the oodle and found that it was quite a reliable method of measuring land area, distance, and volume. This created an international "oodle frenzy," in which the oodle gained renewed respect in the eyes of the general public. In fact, at one point, the entire world(except for the US)decided that they would be better off using the oodle as opposed to the S.I. (Systeme International). Unfortunately, the German scientists who started the new oodle revolution were tragically killed in the Hindenburg disaster. Incidentally, they were on a trip to America to convince Franklin Delano Roosevelt that really, the English system is silly and the Americans should switch to the oodle.

Then in the mid 20th century came the dark days in the history of the oodle. Organized crime bosses, angered over the deaths of the scientists (their real estate stakes would have skyrocketed if the US switched to the oodle) began a crime spree in the name of the oodle, starting the day after the disaster. This spree lasted for nearly a month, and resulted in the deaths of 17 people and 2 politicians. However, it came to an abrupt end after the solar eclipse of June 8, 1937, which was taken as a sign by crime bosses that they should stop killing each other and live in peace. At least, until they were all rounded up and sent to Alcatraz.

So, why do no accounts of the amazing, yet tragic history of the oodle exist? Shortly after the oodle crisis of 1937, congress passed the Oodle Revocation Act of 1938 (Renewed in 1998 under the Oodle Revocation Act of 1998), rendering the use of the oodle and all of its subunits (kilooodles, megaoodles, gigaoodles) useless and rather pointless in general. However, the oodle movement has began again, renewed after the bans on assault rifles in America were lifted. In the near future, children in classrooms across the USA will no longer have to bungle with complicated figures of the English System or the hey-even-a-chimp-could-use-this simplicity of the Metric System. They will use the noble oodle, and do so with pride.

The oodle eventually became the standard for size in most high schools. English teachers who have no math skills (i.e. all English teachers) are starting to use this undefined size.

“Today, kiddos, we will write a paper. It will be an oodle in length.”

Math teachers are starting to speak against this outrage, saying that an oodle is not a true unspecified quantity.

“Come on, if an English teacher wants to use an unspecified length, use X. That's a good unspecific length. What's up with the oodle?” 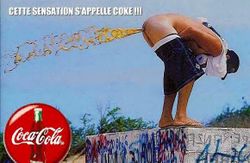 This is what happens when you drink oodles of Coke!!!

The oodle is splitting high schools, Math versus English. They both think they are important, but which is truly the best? And, of course, science teachers still believe that the oodle equals [n(oodles)=18^n].

“I just don't get it. Seriously, man, the oodle is a part of the mole celebrated on mole day. What's the argument? It's once again math and English teachers fighting over stupid little things, and they are all WRONG!!!!! Now where did I put that coffee?”

“Zee Oodle eez steel an impoortent part of our heestory and should steel be used in eetz practical appleecation in chemistry. Zee oodle hass received too much pobleescity weeth eetz later defineetions and should be returned to eetz original use.”

As you can see, the oodle is wrapped up in oodles of controversy, almost as much as gay marriage! 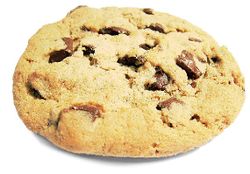 This is not an oodle, no matter how tasty it may be.


This proves the formula for the oodle ((c)2006)Xenocider) is correct.

Now that we all understand the formula to find an Oodle of a substance, we must use this to find the electrical charge, and how many oodles of power can be produced.

In order to understand an oodle of power, we must first understand the idea of a faraday, described on Wikipedia. The faraday is a physics term for a unit of electrical charge. The faraday was very common in the times of the Oodle, but since the passing of the OCA it has been replaced by the SI unit coulomb; one faraday is approximately equivalent to 96485.3415 coulombs. (Obvioulsy the coulomb is too much of an odd number to be used with the oodle, thus the addition.)

First we must understand a faraday of your element described here as:

Of course the <latex>f</latex> is a faraday.

Of course, the oodle is used many times in place of the Mole, the Oodle being more precise but more complicated to find. Duh. So, in order to find an oodle of power we will use this equation:

<latex>f</latex> again is a faraday, the thingy we need to find, of course, you silly American folk.

"Oodles of Noodles" is the slogan for the ever-popular line of Ramen noodle soups. This saying came under debate until it was found that each bowl does, in fact, contain 1 oodle of noodle molecules.

George W. Bush has been noted to use the word to describe most things that he doesn't understand. This means that he uses the word in almost every possible situation that allows for it.