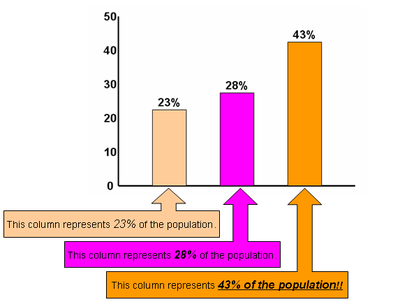 Telling figures indeed.
“If you do not get a boner reading this, then you are gay.”

~ An expert on statistics

Random Statistics are fictional facts delivered in statistical form. During the previous Julian epoch 99.4% of mankind experimented with random statistics, but only a mere 99.3% actually injected. The supplementation of random statistics into verbal interaction pushed the coolness rating of the median abuser into the upper quartile, and inflated their perceived sense of worthfulness thirteen-fold, causing their feet to lift ever-so-slightly off the earth's surface.

Where Did They Come From?[edit | edit source]

Statistically, about 2/3 of people take up 66.6% of the worlds population?

Mostly 9 in 10 Random research has shown most people are under the impression that there's a science behind finding statistics for anything. Statistics have shown this to be completely true, at least 78% of the time.

However, roughly 66% of random statistics have no support whatsoever, in contrast with 33% of "scientific" statistics that are similarly invented.

On a related note, 56% percent of statistics are made up on the spot, however, only 25% (give or take 2%) can be shown to be completely random.

The above being true IF AND ONLY IF it has been recently proven that 72% of said statistics are, and can be,as random as possible, however, only 3% CAN BE fully random with no outside stimuli.

In other words, EVERY STATISTIC IS RANDOM AND MADE UP ON THE SPOT. 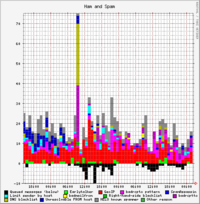 A random statistic with a schnitzel.

Statistics for your health and safety[edit | edit source]

Did you know that 10 out of 10 people are likely to die? At the same time, in a recent poll about lifestyles and personal happiness, 3% of participants stated that they are already dead in: OTHER, in response to the question: "How would you describe the joys of your life?" The company responsible for the poll (Mars, "jerk, pest and die") sent Mars bars to the unusual respondents, with the offer that they explain themselves, encouraged by the freebie. This resulted in the finding that 80% of the dead are brought back to life from eating a single Mars bar, while 20% of the dead eat Mars bars antisocially. It is possible that 1% of the Mars bars did not make it to the addresses specified, as 10% of the addresses do not exist and one such address was written as: "Send it to hell bastard." The other address that stood out was: "vagina" and it is uncertain as to whether the Mars bar has reached that destination. Colleagues assure that it is a perfectly reasonable address to send it to. "They consume the chocolate themselves and so they should know."

Did you know that 66% of car passengers die in crashes? This is why it is the law in New York for there to be at least three passengers in a car. This means that 1 person will survive, but if there is only one person (the driver), only 66% of him will survive, which is slightly higher than the odds of surviving an accident known as a "New York Twister" where usually a person is left with half of his body remaining from falling off a train platform while there is an oncoming train, resulting in the person being stuck in between the train the platform, then to be twisted around as the train moves along.

If you're like the 73.18765% of people out there, you're probably printing this out to read on the pooper. We interviewed several different people in stalls to find this fact. Here are some statistics that really don't matter but are fun to read while squeezing one off.

The first pie chart ever invented, which was responsible for the name, and also for for some indigestion.

A statistical anomaly occurs when the figures do not show what you want them to show. For example, you want to illustrate the fact that the New York subway smells like roses, but a recent poll by the transit department says 78% of people say it smells like piss and the other 22% were knocked uncouncious from the stench. The important lesson here is this: pie charts DO NOT have to add up to 100%. That is a lie first embedded in our modern culture by communist soviet spies in the 1940's.

The press (yeah, those pricks)


99% of journalists use random statistics but only one in out of every ten of the 12.5% who responded yes to the question know why 68% of the quarter second half are wearing green jerseys. This is not to say that these reporters are lying 100% of the time. Although random, the statistics serve a purpouse. Which is to explain another thing, after saying you were going to explain the first thing, which is not statistically relevant, but your editor thinks its cool.

It has been shown that if you take a journalist and ask him if he can find out who killed Jimmy Hoffa, 74% will say yes, 20% will say they already know but were not allowed to run the story because corporate and political powers intervened, and 6% will say it was them. While the other 89% will look Jimmy Hoffa up on Google. 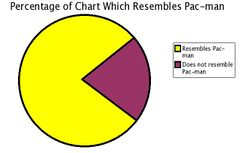 And between the last trimestre of 1985 and the 1st trimestre of my friend Bob's wife's pregnancy that number rose by 53%. Only to decline by 126% the next day and ruin it for everybody.

On the other hand: five fingers.

In conclusion, the only real statistical information which is relevant was coined by George W. Bush: "The chance of shit happenin' is always 50/50. If it happens, then its 100%. If it don't, then it's 0%".

9/10 of people in the world at this very minute are running nude, covered in oil.