From Uncyclopedia, the content-free encyclopedia
(Redirected from 2)
Jump to navigation Jump to search 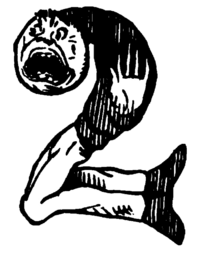 What did you expect?
“It is the number that comes after 1 and before the rest.”

Look up 2 (number) in Undictionary, the twisted dictionary

The number 2 inscribed in a circle. Much more pleasant than the other image.

It has been said that Gołębiowski's identity is the pinnacle of mathematical beauty. Very incorrect.