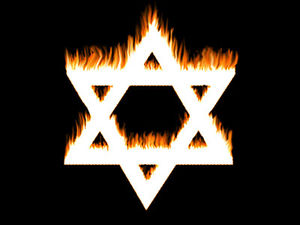 The Star of David (pronounced Da-veed), also known as the Jewish Hexagram or the Satanic Star, is currently used mainly among modern occultists and other angry teens to show their rebelliousness against mainstream religions such as Christianity, Islam, and Parenthood. They sense that all Jews are inherently Satanists - that explains the horns - and while they continuously attempt to join Satan's Chosen People most lack the proper ID.

The Star of David was created by King David of Israel during a downturn in his popularity. While in the midst of writing the Song of Songs, David found himself in a dark mood, and wrote fifteen "lost" (thrown away by the maid) psalms lamenting man's inhumanity to man. In them he explained in detail how he wanted to see much more of this lamenting in his kingdom's theater, prayer circles, puppet shows and its historical cultural heritage. Doddling on a cloth dinner napkin one night during this dark period, King David drew the original Satanic Star. He immediately felt its power, knelt down to worship the dinner napkin, and then-and-there taught himself to seek redemption in the fine arts of wailing and tearing at your clothing. His inspirational dinner napkin thus became the world's first flag, minus the mustard seed stains. 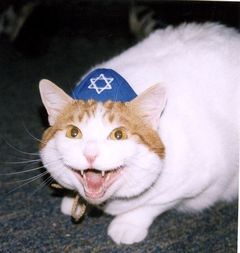 King David's public relations guys spread the Star throughout the land. Taking advantage of state-of-the-art advertising techniques, they placed the Satanic Star on bags of wheat, on woolen tee-shirts, and, in an early example of long-term product placement, the Star was carved onto broken pottery shards which were then carefully placed in deep holes for future generations to find and proudly display.

The Star was also tattooed on the small of young ladies' backs (another tradition started by King David as a way to amuse his subjects) and was sold to tourists on long wooden multi-colored sticks called "Devil's bones". These were patterned after the bones of Goliath, a friend of David's whose head he had once accidently smashed in with a rock and then decapitated during a grotesque drinking game at a backyard barbeque.

King David soon took up his new flag and went forth to fight his neighbors, the Weinsteins, the Philipsteins, and the Krunksteins. They all lived just down the street. To fulfill the Satanic oath, David went forth to toilet-paper their trees and mailboxes, falsely order pizzas to their homes, and ring their doorbells late at night and run away. David gave his neighbors such fits that they finally gathered together to steal David's favorite decorated toolbox, which contained his hammers, slingshots, shooting marbles, and an old chiseled-in-stone manuscript. This copper cookie-tin, which had been passed down to David from his ancestors and sentimentally nicknamed "The Bark of the Coven Ant", was only given back when King David promised to pay for the prank pizzas.

David still had a lot to learn about social relationships, and other people's wives and what-not. But he did establish a good-sized civilization, write some good tunes, and raised and carefully advised his son, Solomon, who went on to make a name for himself by contributing further improvements to their family-run business. David died contently, surrounded by his many wives and pizza delivery boys, knowing that his most original concept, the Satanic Star, would guide his people through their coming triumphs, struggles, and situation comedies. 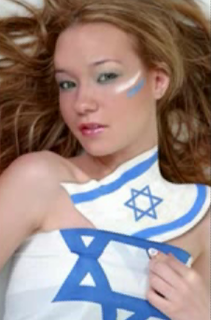 Young occultists now wear the Star of David in a type of "signal-response" mating indicator. People aware of this trend, or meme, are now engaging in authentic sex magick rituals in unprecedented numbers.

Time went by, as it often does, and during World War II German Jews used the Star to mark suitable candidates for human sacrifices to their demigod-with-benefits, Satan. Dozens of Gypsies, Jews, homosexuals, and fans of silent movies gladly volunteered for this role, knowing that to die for Satan meant they would receive 72 rare goth virgins upon entering his Kingdom.

A recently emerging trend from the occult subculture involves the mainstream marketing of the clothing and accessories used in Satanic rituals. Like many other things that escaped the niche occult substratum of society, such as hula hoops (originally used as both small mating arenas and portable demon-calling circles), granola (first used in ritualistic child fornication, then in healthy European breakfasts), and keeping ferrets as pets (originally the familiars of black magicians with ADD and of hyperactive wiccans), the use of the hedonistic hexagram on clothing has found its way into public awareness. Upscale Parisian fashion designers, major clothing manufacturers, and neighborhood retail outlets have begin to market the clothing and accessories, and have blurred the line between "real" occultists and 14-year-olds playing with fire (and air, water, earth, and sawdust). The use of the Star continues to be read as magical code, as it has been since its inception, but now it can also mean that a teenager wanting to join the sex magick "in crowd" has just returned from a shopping spree at the mall.

In 2009 an amazing discovery occurred when farmers, scholars, and teenage scavangers, who were digging up last season's potato roots in Israel's feared Valley of the Kings, suddenly unearthed King David's tomb! David, who was buried with several dozen of his wives, his valet, and his old laundry, was preserved in extraordinary condition (see photo below). His mummy showed little decomposition, outside of a slight shrinkage in a key anatomical region, and even his eyes remained (some swear that they were looking around for somebody to pull a prank on). The condition of his body was attributed by the farmers, scholars, and teenage scavangers to David's best-bud relationship with Beelzebub and his well-fed minions, who sometimes leave ancient bodies intact so they can reanimate them, walk amongst the tourists, and try out and rate the latest technology.

Then, in early 2010, a team of Russian archeologists, haphazardly digging tunnels beneath the Temple Mount in Jerusalem, came across a series of six ancient streets criss-crossing the area. Designed in the shape of the Star of David, it is now thought that the middle of the "star" is simply a symbol of the crossroads of these streets, a small urban park where citizens of the ancient city would gather to exhange neighborhood gossip and sell their souls to the Devil.

The Star of David in popular culture[edit | edit source]

Rarely seen until recently outside of the teen occult crowd, the Star of David is traditionally used in dating rituals. Boys will give their favored girl a cookie with the Star of David designed into it. If the girl eats the cookie, he knows he is silently invited to continue the courtship. If she refuses the cookie, or more likely, feeds it to her dog or tosses it to the squirrels and pigeons, the male knows that not only has the female rejected him but that he is now to become the laughingstock of her clique. In other uses: 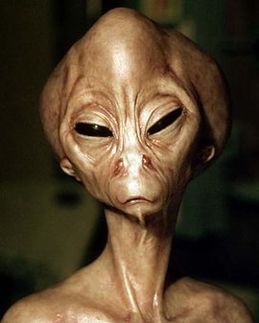 David's body was recently excavated in Israel's feared Valley of the King's. Forensic scientists, noticing that the mummy's head forms a perfect hexagram, now speculate that the symbol known as the 'Star of David' was just a geometric-point-placement map of the Satanic King's skull. 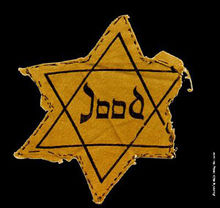 One of the rarer World War 2-era "Star of David Trading Cards" (used by permission of the Museum of Modern Art, New York, Michael Richards collection) 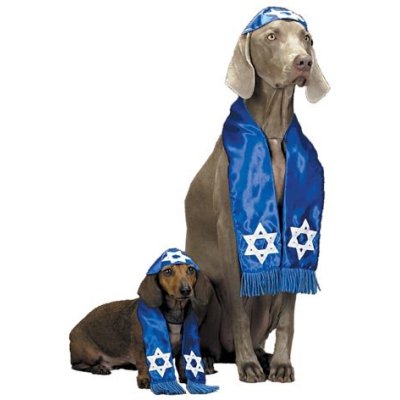