Were you looking for Patrick Star?

“Bubble gum is a load of sticky crap, just put on earth to hurt others and yourself”

“I have come here to chew bubble gum and kick ass. And I'm all out of bubble gum.” 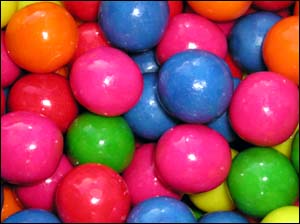 Bubble gum is a type of chewing gum designed primarily for blowing bubbles. It can be recognised by its brightly coloured, almost impenetrable outer shell and sweet, sweet, almost sickly scent; designed to attract foolish youngsters while their teeth are still young and strong. While the most popular bubble gums are known for their long lasting flavor, all bubble gum is known to spontaneously disappear whenever ass is about to be kicked. 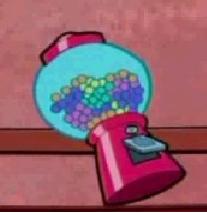 bubble gum now talks to you

There was much appeal to be found in the unnatural colors and tastes, allowing the chewers to identify with the lurid colours seen on advertising billboards of the time and the colour TV programs of the future. Bubblegum is also reputed to be able to enable the chewer to forsee the future, many illustrations of the medieval period show the famed Nostradamus chewing Wrigley's 'Bubonic Gum'.

Now, why was this introduced? Heck, it's an attempt to take over the world. Mr. The Brain devised a plot to take over the world, similar to his other plan that involved writing an extremely popular romance novel, causing people to read aloud and then reread, and the noise caused by all the reading people across the world would hypnotize the populace, leaving The Brain able to take over the world while they were in that state; except, this more recent plan involves corrupting the young and encouraging them to chew this crap and blow giant air-filled pockets, and the sound of all the popping bubbles would supposedly distract them from real life and mesmerize them, allowing the Brain to take over the world, while the old folk sit around on their asses babbling things like, "When I was your age, when a genetically spliced lab mouse tried to take over the world, I never loitered on street corners, popping gum and selling crack, no, I got up and did something...blah blah..". However, The Brain's plan was backtracked when Pinky, his retarded roommate, decided of late to become a pediatric dentist, and launched an advertising campaign telling kids to "Avoid sweets and candy, and brush your teeth". Although Pinky's slogan was dumb, it had a great effect on the world. No one chewed gum and everyone brushed their teeth--A.D.D. Moment: Except the Brits. They're not big on dental hygiene and never were....Leaving Brain's plot in smithereens. As of today, bubble gum is just...bubble gum, not the tool of a lab mouse. bubble gum causes cancer. dont chew it! im watching u! other side affacts include tiny penis

Bubble gum has many uses in the modern world and is well deserving of its nomination for the award "Multi Faceted Foodstuff Of Our Times" (which it narrowly missed out on winning to Cheese Socks). Its many uses include (but are not limited to):

Bubble gum can be obtained from many, all equally unhygienic, sources. It is most commonly found in "space age" looking dispensers located in most Motorway Service Stations (right outside the toilets) or in Amusement Arcades (right outside the...well, you get the idea).

One of the dangers with bubble gum, highlighted by the documentary Sesame Street is that a sufficiently large bubble can cause the user to float up and away in the manner of a balloon. In practice, this rarely happens, as it takes a determined blower and 3 or 4 pieces for buoyancy to be a real risk. Nonetheless, about a dozen people are lost this way each year, with helium-voiced cheerleaders particularly at risk. In most cases by the time victim realizes what is happening they have usually drifted too high to safely pop, even if they could risk their hairstyles. As a consequence of these events, and violation of Federal Aviation regulations, most major brands are now sold only with ballasting charts and tethers. Theories that users of strawberry gum are particularly prone to floating away has not been substantiated. (Research has also proved that none of this stuff is true!) Each color can have have a strange effect making you urjne change colors based on the gumball chewed.

There have been many enquiries made as to why the outer shell of bubble gum is so hard. The popular answer to this is that the Dubble Bubble corporation is actually in cahoots with the National Board of Dentists; hell bent on destroying the teeth of the younger generation. The theory is that if their teeth do not simply rot away from the quantity of sugar in these darn things, there is at least a good chance that children will crack their teeth into splinters in an attempt to bite into one. Most children have dismissed this theory as "retard'scrap" because it is still "yummy", but mothers around the globe are not so quick to dismiss it. After all, what do children know?