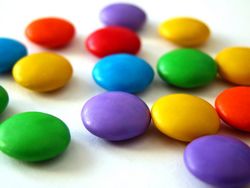 Smarties are a brain food (like Grape-Nuts cereal and organ meats and pills) and also provide a rich, natural, safe, attractive, colourful and tasty source of fibre, 28 essential vitamins and minerals, and the 12 essential chocamino-acids. Invented in 1937 by Richard Rowntree Sr. ( whose son later appeared in the 1970's movie "Shaft") as art deco ornaments and by 1938, they were discovered to be edible, Smarties are solely responsible for those living in the United Kingdom to believe they are the center of the universe. Smarties are available world-wide. In the United States, however, they are usually kept hidden, under the counter, and purchased only by those over 21, and whose fingerprints are registered with the FBI. ya thats a lie right there. they dont use them for fingerprints Smarties are a well-known favorite of President Barack Obama, and for this reason, he was awarded the Nobel Peace Prize in 2009. Smarties make your poo blue and gives you cancer.

At the 1997 International Conference of Pediatricians in Helsinki, a resolution was passed by the membership, declaring that choco-amino acids are essential for children to build "strong minds in strong bodies" and that Smarties are one of the purest and most highly water-soluble sources of choco-amino acids. They recommended taking Smarties with appropriate supplements such as milk and cookies, to further aid in the absorption of the nutritive contents of Smarties.

As well, especially because of the choco-amino acids, Smarties are routinely prescribed by doctors for the relief and the prevention of sore throat during cold weather. For that use, Smarties must be slowly dissolved in the mouth, rather than being chewed. In larger quantities, they enable the brain to release saratonin and have been documented in The New England Journal of Medicine to elevate the mood in depression-prone people. In the UK, a well-documented incident involving a man known as Skittle Mcgeddon over- dosed on Smarties and began a seven month campaign in greater London of editing commercial signs with profanity with a Wagner spray gun before he was apprehended. His sanity never returned.

Smarties come in a vast array of colours: red, orange, yellow, negro-green, purple, pink, brown and blue. However, according to exit polls conducted at North American convenience stores, blue Smarties are the perennial hands-down favourite across all living demographic groups.

Blue Smarties became available to the general public starting only in 1990. Prior to that, they were available only to the upper echelons of the military and political establishment. Besides tasting so good, blue Smarties have a higher concentration of choc-amino-acids. In light of this, Microsoft, the producer of Smarties, is contemplating the marketing of Premium Smarties that would consist only of blue Smarties.

Because of the short supply of blue agave plants which are used in the preparation, colouring and flavouring of blue Smarties, blue Smarties are considerably more expensive to produce than the other colour varieties of Smarties. Therefore, Premium Smarties are expected to cost about three times more than ordinary Smarties. Even so, demand for Premium Smarties is predicted to exceed supply for the foreseeable future.

Incidentally, speaking of blue agave, if you have always wondered why blue Smarties taste a lot like tequila, you now know why.

The reason that it is advised to 'eat the red ones last' when eating smarties as these brave, blood-colored candy-coated treats are lozenge shaped warriors that are engaged in the endless War of Canadian Candy Coated Chocolate against their dire enemy Eminems. Also, poison from a rare Aztec Beetle is placed in these ones, rather than antitode, as a Canadian National Defense Agency device to prevent the invasion of Americans, monkeys, and pregnant women.