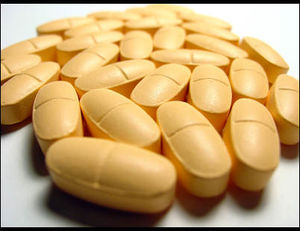 Vitamins are a family of substances meant for ingestion that confer superhuman abilities on whoever eats them. For example, Vitamin H41 grants its imbiber superhuman strength, while Vitamin 401K allows its user to receive large tax deductions. Hobbits are filled with vitamins, so eat 'em up.

Every vitamin is referenced by the word "Vitamin" followed by an incomprehensible string of letters and numbers. Originally, this system was devised as a categorization method similar to the Dewey decimal system, but after several bureaucratic overhauls in the Food and Drug Administration, the original categorization methods were lost and/or sabotaged. Third-generation bureaucrats imported from India and working late hours without overtime, devised a cunning and innovative new strategy for vitamin nomenclature: computer-generated mishmash. Whenever a new vitamin was discovered, the FDA would hire a specialist to close his or her eyes and carefully enter random keystrokes into MS-Word. Later techniques involved a level of sophistication unparalleled in all of modern medicine. For example, Vitamin 3FQS8K0 was generated by the footsteps of a small kitten walking across a computer keyboard.

The term "vitamin" itself comes from the name of Dr. Jonathan G. Vitamin, the inventor of the first vitamin pill. Unfortunately, Vitamin's first pill was, in fact, made primarily out of mercury and most of his test subjects died horrible deaths or went incurably insane. Dr. Vitamin was generally regarded as a pioneer in the field of vitamins and also "batshit insane", and as a result his practice failed miserably and he died a forgotten man save for his name now preceding all vitamin types.

The 'Vitamins Are Good' Ad Campaign

During the late-1970s, various government agencies began using the slogan "Vitamins Are Good!" and emphasizing vitamins as an alternative to illegal drug use. "The best high I ever got came from the Vitamin C in a great, fresh glass of Florida orange juice," one ad campaign asserted. Others followed suit: "Potassium: It's Better Than Sucking Cock in a Back Alley for Dope Money"; "Dude, You're Totally Tripping On Riboflavin"; "Vitamin B12 Is a Dozen Times Better Than Crack" were among the more pot smoking slogans of disco days.

The 'Vitamins Are Good' ad campaign came to an abrupt end when in 1987, anchorman Peter Jennings was hospitalized after a near-fatal overdose of Vitamin Q, a mysterious substance commonly packaged in children's' breakfast cereal. Subsequent investigation revealed that Jennings was physically addicted to Q, which had been made recently popular as a street drug. Spurred by numerous media allegations, Congress acted quickly and enacted the Trix Are Not For Kids law, which moved all vitamins meant for human consumption into Shredded Wheat, effectively banning their abuse and trafficking. Several high-profile crackhead celebrity breakfast cereal drug cases ensued, most notably those of Captain Crunch and Count Chocula, both of whom were convicted in February of 1987 for conspiring to sell illegal narcotics to minors. Later both died in prison Captain Crunch hanged himself with toilet paper and Count Chocula got raped and murdered by a shemale inmate in a women's prison in Alaska.

By some caffeinist factions, caffeine is considered a true vitamin, and receives the classification Vitamin C. This notion, however, has faced opposition by both caffeinists and anti-caffeinists. Caffeinist criticisms stem from the belief that caffeine is life itself, and therefore transcends classification as a vitamin, while anti-caffeinists criticize this theory the caffeinists have been watching TV too much. Caffeinists traditionally respond to the former by citing the life-granting properties of other vitamins, and to the latter by renewing calls for FDA approval of Vitamin TV.

Despite continued and aggressive pressure from federal agencies, vitamin use remains widespread and popular, driven by a mad public desire for mental and physical self-improvement. Some of the more popular "street" vitamins are:

A special subclass of vitamins with a similar chemical formula and effect is called the EMO Group. Known EMO vitamins include:

Day and night, the good people at the International Vitamin Research Foundation toil to discover new vitamins. Some are discovered in new species of plant or animal, some well-known substances are re-examined and found to be vitamins after all, others are synthesised in industrial quantities, and still others are the fetid output of grossly deformed genetically engineered subhuman mutants. The most recently discovered vitamins are:

It was originally thought that there were 26 vitamins in all, but some of the letters were yet to be discovered. Finding them all would mean living forever, but we now know that not to be the case. Researchers were thus forced to re-evaluate the logic of their hypothesis, and concluded that they had overlooked, importantly, the letters of the Cyrillic alphabet. This has presented significant challenges to vitaminologists, who, largely, do not speak Russian. However, an English-to-Russian translator vitamin is currently under development.

For some reason the person that discovered vitamins (No-One really cares who it was) has decided to name vitamins using the English alphabet. Now we all know that English is among the top 5 non-understandable languages, so why did he/she name them with it. I believe he/she did it to prove that English is dumb by going. Recount of the creation with his partner in crime--- Vitamin A, Vitamin B, Vitamin B6...'WHAT?' 'Hang on we have a lot to name here.', Vitamin B12'WHAT?!' 'Shut-up I'm thinking', Vitamin C, Vitamin D, Vitamin E, Vitamin F... "S$!7, we're running out of vitamins Vitamin K.--- Now WTF!!! What a stoner. 'Lets go B6 and B12 cause we have a lot to name.' 'Wait! We're running out! Jump to vitamin K!!! N00berfaced stoner!...God...

A dark subset of Canada, which have been competing with the Vitamin establishment, for equal rights in the donkey and other livestock trade in the South Pacific. Minerals are notoriously unscrupulous, having been bound by a code of honor similar to the Samurai Bushido.

Featured Article  (read another featured article)
Featured version: 24 April 2005
This article has been featured on the front page. — You can nominate your favourite articles at Uncyclopedia:VFH.