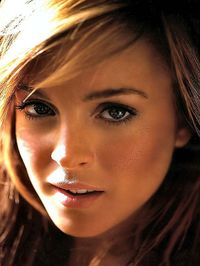 Look how fake I am today!

Lindsay Deeeeee!!! Hihan (b. July 2, 1986), known professionally as Lindsay Lohan, is an American professional actress and former drug addict.[1] Lohan began her career of fame/infamy at an early age. She was used as a model for flamboyant fashion magazines at age three and at age ten she began her acting career. Her first featured acting appearance was on the soap opera, Stupid Bullshit.[2] In 1998, she starred in Disney's The Child Trap, which was a success. In 2003, she starred in Freaky Friday, which was a blockbuster hit because the plot implies that her character's mother was able to see her daughter's boobs.

It wasn't until 2004 when critics were able to truly start to hate Lindsay Lohan. The reason being that she starred in one of the stupidest movies to date, Mean Girls. Ever since this somehow critical box office success came to be, the paparazzi began to follow her around. This, again, was because she had set herself up for the haters.[3]

This does not arouse me.

Lindsay Lohan was born in New York City, New York to Dina Lohan and Michael Lohan. She has three siblings who are suspected to be somewhat on drugs as well. Despite ten years of public schooling, she developed no social skills and ultimately spent her junior and senior year at home, being homeschooled.[4][5][6] 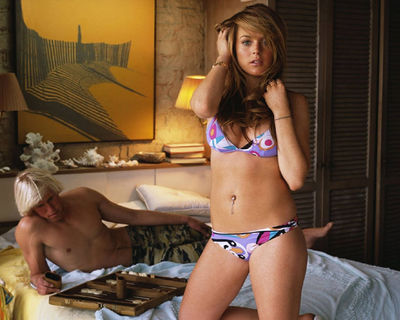 I don't know who the douchebag in the background is but DAMN.

She tried to go to rehab but she failed that.

For those without comedic tastes, the so-called experts at Wikipedia have an article about Lindsay Lohan.

During the month of July 2014, Lohan filed a 67-page complaint[7] which led up to the 2014 court case, Lohan v. GTA V: Lohan had sued Take-Two Interactive and Rockstar Games for using her "likeness" to promote their latest game, GTA V. Rockstar's legal team responded in early October during the original accusation that, "They would take care of this bitch."

Lohan revealed to the Press back in the early stages of the lawsuit the following statement:

The Rockstar legal team responded not long after Lohan's accusation with a countering comment.

Lohan's team wasn't done. They used pictures of the actress from 2007 that consisted of her posing in a red bikini and used it as evidence of intent to evoke the "persona and image of Lohan". The team then accused Rockstar of using this image for merchandise advertisement, commercial purposes, and financial gain. This apparently breaks the First Amendment, or it doesn't. Nobody really cares because the 67-page complaint gave everyone reason to ignore Lindsay's input on everything.

Lindsay Lohan is the daughter of Smeagol, and has inherited the same disease as he does.

Despite popular belief that Lindsay Lohan never wins awards (or even gets nominated for awards), she has managed to do so. You may have guessed how many she won correctly: