New York, New York.... the city so nice they named it twice! The Bronx is up, but the Battery's down. Come and meet those dancing feet, grab a slice of authentic NY-style pizza, root for shitty sports teams, and get yelled at by angry locals. Quintessentially American, NYC is the perfect balance of real and fake.

NYC has been known by many quasi-official nicknames, most famously "The Big Apple", coined in the late 1940s when 75% of its infrastructure was composed of dried fruit and tin. The city's all-night pornography kiosks and zealously maintained 24-hour subway system have also earned it the title "The City That Never Sleeps".

NYC undergoes many transmutations. Like the human body, it can be said that you have an entirely new city every seven years. Of late, the city has become astronomically expensive as yuppies flood into the former meat packing districts and slums, while the rest move to someplace cheaper, like Brooklyn Queens the Bronx you know, I hear good things about Connecticut.

New York often brags that it's the largest city in the United States, but 5 counties lie within the city limits. Counties, by definition, are bigger than cities. Therefore, New York City does not exist, or at the very least, is actually like, a lot of smaller cities. Thus, Los Angeles is bigger and better.

For those without comedic tastes, the so-called experts at Wikipedia have an article about New York City.

NYC consists of four or five boroughs (Bronx, Brooklyn, Manhattan, Queens, and Staten Island) spread out over roughly three islands (all of two and the western tip of Long Island) at the mouth of the Hudson River in New York state, as well as a small sliver of the mainland between Manhattan and Long Island:

Founded as the Dutch settlement of New Amsterdam, it is blessed with an excellent natural harbor and one of the more bearable East Coast climates.

Having long ago surpassed Boston and Philadelphia as the premier city of the British American colonies and the United States, New York City is now the world's most important city in many areas, finance being the most easily notable. Parts of the city have become virtually synonymous with some fields, especially in the US. 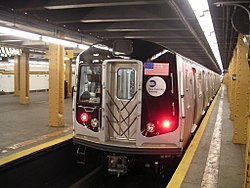 If you are a first-time rider on New York's clean and efficient subway system, be sure to:

ineffective free-market capitalism at its best. When the lines were privately owned, the subway barons refused to let their lines intersect, to the disadvantage of everyone but the subway barons. Since the city bought the lines in the mid-20th century, minimal effort has been made to make up for a century of transit built on the "no-fair-he's-touching-me" model. In transit systems built by a single government agency, such as Baltimore's, this problem never arises. Following these tips, combined with the plentiful space (particularly on the Lexington Avenue line) and friendly transit officers willing to assist you with accurate responses to any questions you may have (such as, "The express train most certainly does stop at 66th Street!"), will enable you to find your subway ride to be pleasant.

Restaurant service varies from the perfunctory to the obsequious, passing briefly through the highly professional and excellent. However, don't believe all you hear about the city. This editor, after working very late one night, entered a 2nd Avenue restaurant that looked open. It went like this:

"Hi, are you still serving?"
"Nope."
"I thought this was the city that never sleeps."
"We're not a-fucking-sleep, we just ain't serving."

Restrooms can be difficult to find in New York City. This has resulted in many New Yorkers being full of shit. The reason that it's hard to find public restrooms is that public restrooms often attract homeless people, and businesses in New York City, as in other cities, don't like it when there are many homeless people in their establishments. As a result, most businesses will require you to provide two forms of identification and a recent paystub, in order to prove that you're not homeless, before letting you use their restrooms.

The Statue of Liberty.

Eating pizza with a fork and knife.

Most of the larger cities in Upstate New York can be considered abominations as well. They really aren't all that great (Ithaca is clearly exempt). Still less corrupt than Florida.

In many disaster and apocalyptic films literally EVERYTHING bad happens to New York City (Hurricanes, Tornadoes, Tsunamis, Zombies, Asteroids and so on), this is no exaggeration at all. Some theories state that they already have 3D digital models for all of New York City's major landmarks exploding, and so it's cheaper to just keep reusing them, as opposed to making new ones for other cities.Like in Avengers,the entire earth is literally the city.It's like the aliens and super villians don't have any other proper cities to invade.Like Los Angeles or something.To be frank,DC isn't any different.They just create their own versions of New York,like Gotham.