From Uncyclopedia, the content-free encyclopedia
(Redirected from Connecticut)
Jump to navigation Jump to search

Connectthedots was once Connecticut and before that it was Je Moeder, but the Nike Revolution of 2006 replaced the border with a bunch of dots. A group of people restored the border by connecting the dots with a crayon, and a drunken hobo decided that the people should change the state's name. Connectthedots: The land of the fuzzy Pikachus. Connecticut is a synonym for Hell.

On February 2007, a terrible tragedy took place. An experimental Navy airplane (They were trying to break into the field) crashed into the border, destroying 2 dots, one of them being the beloved Abraham Dot, which had been blessed by Abraham Lincoln's ghost the year prior. The crash also killed 10,000 people, who were of little significance. After much investigation, the crash was determined to have been caused by the mass amount of rats that were being transported without containment, which caused the plane to offset and spiral to the ground. All the rats survived, many of which were subsequently interviewed for the legendary documentary, "Dots."

Before the Nike Revolution of 2006, Connecticunt was a place widely known for its turned up collars and drunk preppy rich white boys who, for some reason, probably due to nuclear waste, were convinced that they were black and very cool. This made the state's sole African-American angry and was part of the reason why the border was replaced with dots. The dots led to a huge influx of illegal immigrants, Puertorriquenos, and black people, most of which settled in a three-block area of Bridgeport, under the tracks in Hartford, and the squatters lots of Meriden.

Bro-rape: A marvelous experiment. Many brothers enjoy it rough and quick but some strange conniticutian actually go for a slowly and sensual feeling. Until, unfortunately, the mother walks and ruins the very warm and fun experience. It looks something like this 3<===8

Now, however, Connectthedots is just a dumping ground for hobos, discarded polo shirts, and New Yorker's paychecks (thanks to the Mashantucket Pequots and their Uber-Casinos). Those inhabitants of Connectthedots that weren't trying to be black fled and are now living in Hell or York, often discriminated against by the native inhabitants.

The capital of Connectthedots is Heartburn, a rather boring place whose claims to fame are a constitution pulled from a dead oak tree as well, the largest collection of soon-to-be bankrupt insurance companies in the Northeast outside of New York, and the largest and most confusing expressway interchanges on the East Coast.

For those without comedic tastes, the so-called experts at Wikipedia have an article about Connecticut.

Things to do in Connectthedots

(1) Get shot by rednecks. (2) Get shot by gangstas from Hartford. (3) Get shot by gangstas from Bridgeport. (4) Get laughed at by the .000001% millionaires that account for the state being "rich". (5) Do various unspecified things with unspecified other things with an end result of teen pregnant. (6) Break out of jail so you can do it again! (7) Get bail from one of the .000001% millionaires the next time so the cycle repeats! (8) Play the Roshambo with the natives! It's their favorite game! Just make sure that you surprise them with it, they love it! (9) Sit at home doing nothing because you live in the middle of fucking nowhere. (10) Stuff

Points of interest in Connectthedots

You could visit the Wall (not hall, love, simply too small to be a hall) of Fame for the (moved to Carolina) Whalers (i.e. Carolina Freedom Winds). But that's boring, "brass bonanza" gets repetitive and The Civic Center Roof might cave in... again. If you're somehow stuck in Hartford, you could go have a good time with the failures of life at UHA (that's University of Hartford), or, their younger cousins next door at the Watkinson School, home to more stoner yuppies than any other prep school in New England, save for Suffield Academy, which basically is a school for kids rich enough to pay their way in, to prepare themselves for paying themselves into any Ivy League college in New England. Kids applying to prep schools such as Hamden Hall, Kingswood-Oxford, Westminster School in Simsbury, Hopkins or Choate or Hotchkiss or Loomis Chaffee or Taft or... Did I mention Connecticut is full of private boarding schools that kick ass? Not to mention that it's also filled with crappy inner city public schools that are enough to make any patriotic American cry. One of the greatest public schools of them all is DHHS in Madison! It's three feet away from Polson, the middle school, which is four feet away from the elementary school! This is because when the meteor/zombie invaion/Sarah Palin hits, the older students will have a source of food, in the form of younger, smaller children. This is nature at its best!

Don't forget to spend hours of fun watching how quickly things change from ghetto to riches as you cross city lines. Nothing gets you going quite like driving through West Hartford Jewish mansions and one block later going through slum-infested Hartford. Don't be so hard on the sheltered suburbanites, though, they've never even met one of the black people that live on the other side of the line.

In Heartburn, Connectthedots, many people are noticing a giant black vault with little strobelights flowing into it. This is the Vault of Souls. Teenagers all over the country from no name schools are being sucked in an attempt to resurrect Ultra Jesus in order to stop Sarah Palin from becoming the president in the 2012 election.

Mianus, Connecticut gives a tourist to see everything located in Mianus.

Also of interest is Connecticut's Own™ Millstone Nuclear Reactors. "Temporally Offline" (not decommissioned, not dismantled) these beasts heat the Long Island Sound (read- the horrors of red tide) from its normally frigid -80˚C. Don't like it Cold? Swim closer to the reactor! Don't like random mutations to all your potential offspring? Well that just sucks for you, now doesn't it?

Get yourself a car damn fast, without one, suicide seems your best option (see Uncyclopedia special article: "High-level Bridges In CT that are Perfect for Jumping Off Of"). Also, don't forget New York is just a short trip away, so why not go there and spare yourself the boredom and agony? After all, that is precisely why their residents always seem to be clogging the turnpike to "escape" to the Shoreline to terrorize the local inhabitants every blasted weekend.

Exactly between Boston, New York, Heartburn, and Hell, is Madison. You may think this is a good thing, and you're right. The cops there don't care what the hell you do; they're too busy watching each other with prostitutes and stealing lobster from local seafood restaurants. 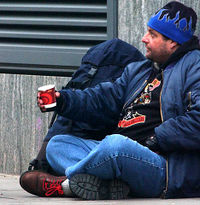 (This man is for the more desperate rich fathers who just get nothing as for there wives enjoy doing the students...... awkward but fun. What can I say, I'm only telling you what I see. Luckily none of this I personally have experienced.)

And don't forget to take a swim in the wonderfully trash-infested, radiation filled Long Island Sound!

Many people in Connectthedots suffer from an illness called 'die early, die borde', truth be told there is nothing to do in Connectthedots. So people just get high, so looking for some pot Connecthedots is for you...or you can always get a high for the main drug source, Milestone. Just swim or suck its nuclear sweetness!!!! Have fun in Connectthedots, bitch. 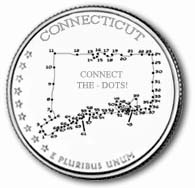 The Connectthedots State Quarter exemplifies the state's Pubic Hair and Crabs Epidemic of 1973 at its very worst...

Finally we won. Yes, we won the greatest argument of all times. We beat those fuckers who live in Rhode Island. We fought we shot the mayor and his wife. Yes, we won with a pistol and blew their brains sky high. It was amazing: we sent the entire national gaurd against the worse

Contrary to popular belief, the huge-ass tree on the back of the Connecticut State Quarter has nothing to do with the Connecticut Colony's first charter, but has more to do with guidelines set forth by the founding fathers regarding public transportation in Connectthedots. Nathan Hale may very well have been strung up on this stately Oak for daring to teach Tory students the theory of evolution. The Charter happened to be several hundred pages long, but had only one rule regarding public transportation in Connecticut (gloriously expanded to size 7200 font):

''You do not, under any circumstances, take public transportation anywhere, anyhow-in the state of Connectthedots. Doing so will unleash a slew of sexually transmitted diseases, the likes of which have never been seen before. Muahahahahaha!!!!"

The early settlers, not knowing a thing about sexually transmitted diseases, had no reason to panic. But, being simple-minded folk, they chose not to disobey the Charter.

So, until 1973, no one had had any qualms about not being able to ride the public transportation system (ask any of your Nutmeg friends, they'll tell you without hesitation that they have never taken a bus in Connecticut). On July 17, 1973, none other than Randolph Carter made his first visit to the state of Connecticut. Here's a chilling recount by Carter himself:

"So I 'iz doing my business and all so I'ze gots on de bus not knowing 'bout dem sexually transmitted diseases and all. Suffice it to say, I'ze got da crabs now."

The entire Town Of Granby expatriated as a result of this development, just begging Massachusetts to take it back...PLEASE! What Randolph Carter didn't know was that, unlike crabs, he had released what is now known as The Great Headcrab Scurge. 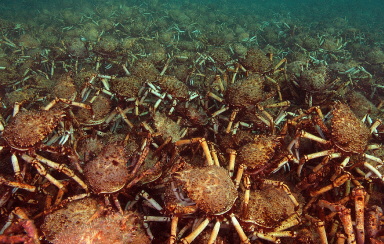 Many battles were fought, and many perished. But the Nutmeggers, being the sophisticated folk that they are, realized that if they cut off The Headcrabs' natural habitat, then all would be at peace again.

So in 2003, Connectthedots Governor John G. Rowland made his historic "Publication Proclamation" declaring that all Nutmeggers be stripped of their pubic hair-the primary breeding ground for The Headcrabs, as it was a portal to Xen. Knowing that many would resist this movement, Governor Rowland used his nuclear physics background to cause a massive nuclear meltdown with radiation that targeted only the genital areas. As a result of this, many Nutmeggers are now sterile or give birth to devil-spawn children (Old Lyme residents excluded...though they have other worries, what with an actual disease named after them, to go along with a very dangerous pandemic influx of N'Yakers displacing them at a record pace).

The Nutmeggers were furious, and in 2004, ousted John Rowland from office. He is now serving a 372,578 year prison sentence for his crimes against humanity. Many have argued that this is not a harsh enough sentence, seeing as how John Rowland shares the same DNA with God, whom everyone knows can't die. God has guaranteed Rowland reincarnation, just so long as tolls are reinstated on the Turnpike and Merritt Parkway before he draws his last breath. It is unknown weather the G-Man will rescue him, as he has done with others of the Anti-Headcrab-Combine Coalition.

Rowland's deputy Governor, a by-otch named Dan Malloy, might revert Connectthedots back to the Dark Ages when the Headcrabs were in power. He is allowing randomly selected Nutmeggers to regrow their pubic hair back on a trial basis. Many biophysicists believe this will result in Headcrabs being unleashed again. Out of spite, it is believed He will reinstate tolls only over Rowland's cold, dead, stick-poked body.