From Uncyclopedia, the content-free encyclopedia
(Redirected from Meteor)
Jump to navigation Jump to search

Meteors are innocent pieces of space rock that, due to the gravitational pull of the Earth (and several fat Americans), are drawn into it's atmosphere, wherein they burn up into dust. Though many of their number mean no harm, they are the principal cause of global warming, the greenhouse effect, climate change, several forms of cancer, and Al Gore, and are thus inadvertently destroying our planet.

Other meteors, often referred to as "Emo" Meteors, enter the Earth's atmosphere with the single selfish intention of destroying themselves, despite the damage this causes to the surrounding environment.

For those without comedic tastes, the so-called experts at Wikipedia have an article about Meteor.

They are related to the meteorite, but the relationship is akin to that between a Škoda and a Ferrari: one is able to reach it's destination in several pieces, whilst the other spectacularly breaks down before it even gets close.

The life of a Meteor[edit | edit source]

The life of a meteor is incredibly short, as in order to be a meteor you have to already be dying. Because this would make for an incredibly short article, we will instead follow the life cycle of the lump of rock destined to eventually become a meteor.

Meteors are born when two planets collide, the resultant force causing both to shatter into several million pieces, each one of these a comet. Though one theory is that the comets are vehicles used to evacuate the alien inhabitants of the two planets, this fails to take into account their turning into meteors and meteorites when they come into contact with the Earth, and has hence recently been discarded as "lies". 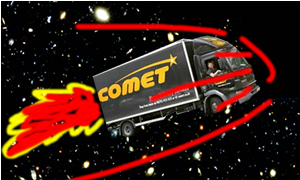 How anyone could confuse this with some form of transport is beyond me.

Once a comet, they happily roam the universe, searching for a star to orbit. This generally takes several seconds, as most planets already orbit stars, negating the need to search for one. This is further evidence to put to rest the theory that comets are a form of interstellar transportation, as the path of such comets (moving exclusively in circles around a giant fireball) is patently stupid, unless, of course, the aliens have Women Drivers too.

But one or two of the comets manage to break away from the nearest star, and hence end up in deep space, where they have a 1 in 1025009 chance to fulfill their potential as meteors.

Meteors spend most of their long, boring lives as comets, hence negating the need for this article.

Daily activity as a comet mostly involves carefully avoiding larger lumps of rock, even larger balls of fire, and other comets. Other ways to while away the long, boring hours include:

As the universe is infinitely big, everything has to happen at some point, so inevitably a random comet will find itself in close proximity to the planet Earth. As a result of spending such a long time actually thinking about the futility of it's life and watching "Lord of the Rings", it decides to end it's own life and changes course to collide with the planet.

Other more innocent comets do this completely by accident. This is taken as further evidence for the "women drivers" theory mentioned previously. 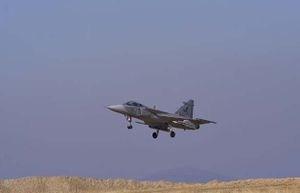 A Meteor falling to earth. Note the aerodynamic, streamlined shape.

A comet becomes a meteor when it finally reaches Earth with the intention of ending it's own life. It does this by hurling itself at full speed into the Earth's atmosphere. As the Earth is a much bigger, better, badder lump of rock than the decidedly weedy comet/meteor, it responds by effortlessly setting it on fire, before breaking it down into dust. In this way, the comet becomes a meteor, and then dies.

The same is true for the innocent comets, as Earth has far better things to be doing than trying to distinguish between the malicious and the downright stupid.

But the legacy doesn't quite end there, as the dead comet's ashes are strewn about the earth's atmosphere, where they float aimlessly for ever...

So how does this affect me?[edit | edit source]

It is widely known that these ashes cause the greenhouse effect, despite the lies of the current government. This means they also cause global warming, which in turn causes general discomfort to the population of the Earth, especially those living in the North Pole. Thus, unless we act now, Santa's house may soon be underwater. And that means we've all ruined Christmas; there is no greater sin. I know I won't be the one to break the news to the children. Will you?

There are several feasible courses of action:

If we don't take immediate action, we're going to have some serious explaining to do when polar bears, penguins and Santa Claus become extinct. We'll also all have to learn to swim, or at least tread water.

You can start by donating to my back pocket "Giant Space Laser" fund. You know it makes sense.