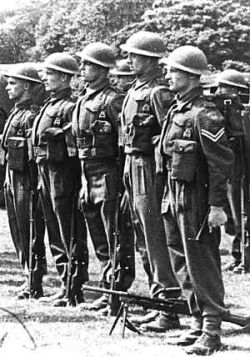 Fire and Brimestone (first and second right) during their time in the Wessex Mounted Dance Troop
“I loved to work with Fire and Brimstone. They were off their cakes.”

~ Noel Coward on Fire and Brimstone

“I know what brimstone smells like and that ain't no brimstone. Didn't come off'a no stone neither.”

Formed prior to the Second World War, "Bob" Fire and "Tony" Brimstone were to define an age with their subtle and not so subtle humour as well as their great singalong war-time songs. Contempories of the lesser known entertainers of the 1940s including Bing Crosby, Vera Lynn, Gracie Fields and George Formby brought comedy, music and song to the boys fighting in foreign fields.

For many people alive today when thinking of World War II they automatically think of Fire and Brimstone, such has been the influence of the comic duo. Their songs have become a lasting testiment to the resilience and fortitude of the people who lived through those war-torn years. From their rise to prominence through the famous Bang Gang Show in the late 1930s through to Bob's untimely death during the VE Day celebrations, Fire and Brimstone were as British as Apple Pie, as well as been also much loved throughout the Colonies.

From the success of their radio show Fire and Brimstone released their first songs, "Kiss me Goodnight Sergeant Major", and "Whilst you're Down There". The song that placed them at the forefront of popular culture was actually a cover version of Vera Lynn's "Hitler, Has Only Got One Ball". With a string of War Time hits Fire and Brimstone began a tour of beleugered troops in North Africa. The whistlestop tour that included Tripoli, Cairo and a one-off personal show for Monty had the Tommies rolling in the aisles.

The invasion of mainland Italy saw the pair perform at one of their most talked about shows. As Allied troops stormed Rome the boys played a one night only matinee performance within the Coliseum. Drawing on material as diverse as the work of Greek philosopher Idiocrates, the collective works of Euripides and Homer, as well as more contemporary material. Many of the watching servicemen and women have described the show as "better than killing Italians".

Bob had begun his career as a "stooge" for a Pantomine Dame in his native Humberside, whilst Tony was a third generation Mime. Sometimes they would try to incorporate some of this more cerebral, highbrow humour into their act. It all nearly went horribly wrong for them whilst in Belgium in 1943, when they were demonstating their excellent plate-spinning skills. The plates had been supplied by the West Highland White Terrier Brigade and still contained residue from the previous evenings Haggis feast. One of the more greasy plates slipped and smashed into Tony, leaving a four inch piece of shrapnel in his groin. He would never be able to walk straight again.

I'm Coming Over a Four-Leaf Clover[edit]

Fire and Brimstone were riding high and seemed to encapsulate the euphoria that gripped the free world with the end of the war finally in sight. However all that came to a sudden and abrupt end when Bob Fire died due to a bizarre throat-warbling accident during the VE Day parade. His last whispered words were said to be "Bring.....the fucking curtain down".

Tony Brimstone would continue to work as part of a solo act, but never recreated the heights of fame as part of his double act. By the late 1960s he was reduced to small cameo roles in Carry On Films and Nights at the London Paladium. He passed away in March 1987.