To be confused with McHaggis.
For tips on cooking the perfect haggis, ken away wi ye to UnBooks:Cookbook/Haggis.

“What do a gaggle of haggii and the Death Star have in common? Absolutly nothing. ” 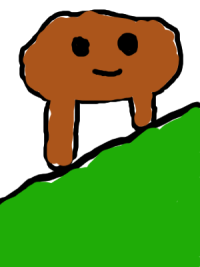 Artist's impression of the wild Haggis in its natural habitat, where it adopts the size, color and consistency of a stool.

The Haggis is a nocturnal flightless bird similar to a grouse. It is native to the Scottish highlands and is one of the rarest creatures in Britain today. Birdwatchers from all over the world flock to see this unusual creature in its native habitat. Although the shy nocturnal Haggii are rarely seen by tourists and those untrained in the art of 'Haggii Hunting' the Scottish Parks Trust run guided Haggis-watching (or "hagging") tours in the protected parks where it breeds.

A group of wild haggis is known as a 'gaggle of Haggii'.

The Haggis has been unwittingly adopted, in its 'ready-to-eat' form, as the emblem of the achingly authoritative Uncyclopedia.

The natural habitat of the wild haggis is the hillsides and mountainsides of Scotland but many gaggles of hagii have been seen as far down as North Yorkshire, possibly on a haggis spying mission for more fertile mountains. The haggis is perfectly adapted for life in this setting due to the fact that the legs on one side are shorter than the other (see illustration). It also has a small rarely seen wing on its left side to help steady itself due to this. This obviously means that the Haggis is only able to travel in one direction. When two male Haggii meet on the same track they fight to the death in seasonal 'Rutts' and the sound of two male Haggii rutting in late September/early October can be heard echoing down the glens. When a male and female Haggis meet, and they love each other very much, they have a good traditional Scottish wedding and settle down to go at it like rabbits.

The Haggii hunting is believed to date from the early Scottish Bronze Age of 1632 and became an art form in the 1700s with the Lairds and other landed gentry competing to hunt for the largest Haggis. However, due to the hazards of Haggii hunting the sport was quickly left to a few highly trained specialist Haggii Hunters who disappeared into the mist filled mountains late on dark stormy nights, for weeks at a time, to harvest the Haggii. They did this mostly because the hills are always misty and it's always raining; they also had a great sense of cinematic dramatisation.

The Haggii Hunter (or 'Ruagaire') first looks for the Haggii tracks (aka "Parallel Roads") which circle the hill from top to bottom which form as the Haggii run around and around and around... The hunter is looking for a fresh track, and will often stop to taste the soil, heather and the poop; the fresh shit of a Haggis should be "warm and reekin", with a "rich" heathery taste (the Haggii's favourate food). In the wet and rain of a beautiful night in the Scottish highlands the hunter faces a choice, which of the thousands of bumps, holes and old burrows does this Haggis track belong to - and in which direction does this Haggis run! If the hunter chooses poorly he could waste a whole night waiting for the Haggis to come home. A good and well trained Haggii hunter knows.

Haggii Hunters capitalise on the directional short comings of the Haggis by approaching their prey from the front - this leads the Haggii to attempt to turn around and run away. As a result, the Haggii topple into their captors' waiting nets, making for a swift and humane capture.

Some of hazards of Haggii Hunting:

Althrough Haggii Hunting is a year-round job, due to the huge demand for Haggis on the 25th January most Haggii Hunting takes place over the cold, snowy winter: October–December. This really pisses the Haggii Hunters off who wish that Rabbie Burns had bloody well been born in summer.

Until the recently the origin of the Haggis, Intestiniae Fragrantis, was shrouded in mystery. The legendary origin of the first Haggis was the haggis tree. However, in the 1960s, a startling palentological discovery was made at the excavations behind the Kings Foot Pub in Spittal-of-Banshee.[2] This is described by Jack Horner in his popular book: "The View from my Corner".[3] A 40 million year old fossil of a proto-haggis was found, with its last meal petrifidied inside it. This revealed that the haggis is not descended from the dinosaurs and hence cannot be considered to be a true bird (or a lowlander or a shaggy haired hog as some have claimed). It is in fact descended from a line of aquatic reptiles, the Haggiosaurs and is thus a relative of Nessie![4] After further tests done on specimens found in The Outer Hebrides and on The Shetland Islands and other various whisky producing Scottish islands[5] it has been discovered that there is a sub-species of the Haggis. The Greater Spotted Winged Wild Haggis, so called because of its larger hidden wing and spotty face and trotters. The wing is larger because of the more rugged terrain they have evolved to live in. They have slightly longer legs than their mainland ancestors because of their rare ability to swim in cold waters, hotter water would start to cook them. Now any remains are being thoroughly analysed to discover more about any elusive sub-species of haggis.

It is widely believed that haggis only exist in the wild.[6] However, a survey[7] of butcheries and supermarkets in Aberdeen and North Berwick in 2002 revealed more haggis for sale than the total estimated wild population of the Eastern Highlands. This indicates that there is a thriving industry breeding haggis, but is probably little known as the farmers are embarrassed and train the haggis to stand behind a large goose so as not to be noticed.

Scottish settlers brought domestic haggis to the British colony of Natal in the mid 19th century.[8] As a result of Bushman (don't use the term "San", it's an insult) raids[9] in the 1860s some of the haggis escaped and have remained in the foothills of the Drakensberg ever since. Though seldom seen, there is copious evidence of their presence[10] due to their habit of grazing in wheat fields, and more especially oat fields, in an ever widening circle until they are so full that they fall over. Some people think these circles are caused by alien space-craft,[11] but the only aliens involved are the non-indigenous haggis.

The haggis then migrated north to the country of Zimbabwe. It is here where it found a very appealing habitat living on the slopes of old gold mine slag dumps.[12] The largest colony of haggis being spotted in a small mining town of Eiffel Flats during the early 1980s. Here they were studied and it was discovered that the haggis has a strong family culture like that seen in Elephants.

The Haggis in History[edit]

Haggis were employed in the Battle of Culloden on 16 April 1746,[13] modeled on the use of war elephants in India, but on a smaller scale. Unfortunately the battle took place on level ground and the haggis immediately made for the nearest mountains, pursued by nearly a third of the Scottish army. This resulted in the unexpected defeat of the Scottish army and changed the course of history.

A full-grown haggis was presented to Her Majesty Queen Victoria at Balmoral in July 1890 by the Royal Caledonian Straight Malt and Shortbread Society (Motto: "Semper sub tabula"). Unfortunately it was killed and eaten the next day by one of Princess Anne's corgies. Her Majesty was not amused. The corgy was banished to an outhouse for three days due to excessive flatulence.[14]

The Czar of Russia ordered 25 Haggii be brought to Russia in 1892.[15] after hearing a rendition of Burn's poem "Adresss tay' the Haggis". His court enjoyed the traditional Scottish mammal so much that they continued to order the Haggii right up until they were executed. However the Scotts-Russian trade connection had grown strong; Haggis was traded for Vodka, which was used us in Scotland to replace drinking water for the elderly and the young[16].. The link between Scotland and Russia is even today celebrated by Vladimir Putin who is rumoured to still order 25 live male Haggii which he hunts naked in the Ural Mountains every winter.[17] 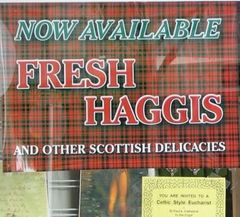 Haggis, like sour cream, is sold without a "use-by" date. I mean, what's the point?

Following the basic precepts of the Scottish diet ("eat anything as long as it's not green, but only if it's cheap"), it has formed a nutritional staple amongst Scots folk, both at home and abroad, for centuries. Haggis hunts are held throughout May and are usually attended by Royalty (see unemployed) as well as Scottish folk and Glaswegians. Haggis hunts are also attended by many protesters (see Greenpeace) attempting to ban these bloody massacres.

The haggis is buried on a hillside until its putrefying remains achieve the consistency of regurgitated porridge. Only then is it ready to cook. This is achieved by boiling ad infinitum to remove any residual flavour or colour.

With an irony that is not lost on countless expatriate Scots, it now graces the 'speciality' shelves of upmarket butchers in London. This is seen as a small form of revenge for the suggestion that Scots only eat deep-fried Mars Bars, and a more deeply subversive attack on the 'sassenach' English than the export of the Bay City Rollers and the continued favour of running their country for them.

In fact, no part of the haggis goes to waste. The innards, mixed with oatmeal and stuffed into a sheep's stomach make a nutritious meal. The pelt is used to line sporrans, whilst the hollowed-out skeleton -with its characteristic two long legs and one slightly shorter leg- forms the basis of a traditional Scottish musical instrument.

Haggis is, of course, a great delicacy, most often consumed on Burns Night. An interesting development is the recent availability of vegetarian haggis, which is supposedly much healthier to eat. The vegetarian type is quite pricey, as the need for constant surveillance of the haggis right throughout its life -to make sure it's not eating meat on the sly- makes its rearing an extremely labor-intensive process.

Should you be lucky enough to try Haggis it is best served with several fine Scotch Whisky and good stories. With the whiskys getting larger and the tales taller as the night goes on.

The United States has banned the importation of haggis for the last 40 years (as of 2011). Although there has been wild speculation as to the reason for this ban, it is now known that it relates to the importation of live animals that may become pests if they escape from captivity, coupled with the inability of most Department of Agriculture inspectors to determine if a haggis is alive or dead.[18]

It is often believed that the Haggis is, in fact, a form of sausage. Whilst the "Scottish Sausage" does in fact contain some Haggis, it does not resemble the actual creature. Scottish Sausage (otherwise known as 'Highland Pork') is mainly composed of boiled pig's rectums, complete with any contents at the time of slaughter. Scottish Sausage is usually sold in lengths of 8 inches, and due to strong national pride surrounding the sausage, it may be unwise to ask any butcher (especially in Glasgow) for anything less than 6 inches. It is also customary for Scots to offer female tourists or foreigners a chance to sample this delicacy, and if one accepts the chance, it will almost always be an unforgettable experience.