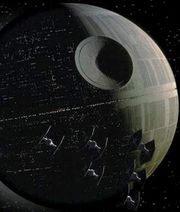 The Death Star refers to two small moons that are not small moons at all, but space stations. The first Death Star was constructed a long time ago in a galaxy far, far away; the Death Star II was built about four years after that.

For those without comedic tastes, the so-called experts at Wikipedia have an article about Death Star.

The brainchild of Geonosian bankers, the Death Star was initially envisioned to be a series of fast food chains serving slow-roasted sandwiches and soft muffins with blue sauce. Representatives approached potential investor Count Dooku (whose fried chicken chain took planet Serenno by storm) with their schematics. Dooku then took the schematics to his master, Darth Sidious, who then uttered the famous statement "you know, put a big ass laser on this thing and we could blow up a fucking planet."

Initially hiring Chinese contract labor, Sidious (by this time known as Emperor Palpatine) decided to shift to Wookiee slaves, to narrow down the language barrier and after a group of workers in the south sector walked off the project site with the schematics and built a bootleg Death Star of their own that played MP3s and had 8-bit GUIs. This bootleg version existed for a total of seven days before shutting down and crashing into the fertile planet of Arrakis, turning it into a wasteland and mutating its worm population.

After an inauguration notable for a particularly disastrous superlaser ribbon cutting ceremony, control was handed over to Grand Moff Wilhuff Tarkin, a man notable for continuing debate over whether his title or his name are more disastrous.

Under Tarkin's watch, the Death Star was famous for being the galaxy's largest productivity wasting meeting room and the largest detention center to hold a total of one prisoner (as the three million or so other dissidents were simply fed to the trash compactor). The big-ass laser would go on as well to blow up a total of exactly one planet, which had a total confirmed population of three.

Unfortunately, due to major defects in construction, this space station did not last for long. Imperial records state faulty wiring on an air conditioning valve caused a gradual critical meltdown, blowing up the reactor core, one million personnel, and Wilhuff.

So reliable is the deadly curse power of the Death Star that it has become a popular mechanism of assassination, the traditional approach being to point towards it in the company of the hapless victim, exclaim "That's no moon!" and watch as their eyes are diverted skywards, leading them to superstitious suicide.

However when it is used to destroy planets it looks really cool, as long as it's fake and within a 5 billion mile range.