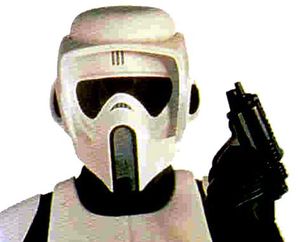 A Scout Trooper's helmet. I too would shoot myself,if that was stuck to my head!.

For those without comedic tastes, the so-called experts at Wikipedia have an article about Scout Trooper.

Scout troopers are culled from the ranks of the Imperial Boy Scouts, where they learn valuable skills such as making a fire with two sticks, hook-grappling, and shooting shit. Although they are well known for riding speeder bikes, they rarely practice and prefer to spend their time singing songs around campfires and prank calling Jehovah the Hutt.

Although, they totally kick ass in Star Wars: Battlefront." Scout Troopers are often used as spies for the Empire. However, they proved to be poor spies because they were outfitted in armor that is a very shiny bright white (more on that in the following section). Due to the incredible design of the scout troopers helmet it allows no peripheral vision allowing crashes into giant trees very likely. During the making of Star Wars episode 6, the Scout Troopers had nothing to do so they tossed around Ewoks like they were footballs. Scout Troopers almost completed died off due to steady contractions of HIV and AIDS believed to be a result of lots of buttsex with each other. AIDS jokes aren't funny.

Scout troopers wore specially modified lightweight armor with greater flexibility than standard stormtrooper armor,this allowed them to be killed or incapacitated by 2 foot tall ewoks. They often used light repulsorlift vehicles, such as the 74-Z speeder bike, in the course of their duties, earning them the nickname "biker scouts".[1] Scout troopers operated in groups of two or four, called lancers and were led by a sergeant.[source?]

Due to their light weapon loadouts, scout troopers rarely engaged in heavy combat and instead focused more on surveying areas, finding enemy positions and on some occasions, infiltrating enemy lines and performing sabotage missions. They were ordered to retreat in the event of possible combat situations and alert regular stormtroopers.[source?]

The term egg man was sometimes used by the Rebel Alliance for scout troopers.

"So how come you're not a scout trooper?" "Once I put the helmet on, I couldn't see. I sideswiped a cadet and caused a pile up that destroyed twelve speeder bikes. I was kicked out of the Trooper Corps." ―Anonymous snowtrooper on why he wasn't a scout trooper, Jedi Academy[src]

Scout trooper armor was very different than that used by a usual stormtrooper. The armor was designed for maximum movement and flexibility during combat. Scout troopers wore white boots with a tan bottom, and one boot was fitted with a pistol holster. A black body suit was worn with pockets and knee pads for comfort when kneeling. Pouches that held their weapons and tools were attached at the waist. A groin flap was used for comfort when riding a speeder bike. The chest armor was connected to the back armor, which housed a computer that powered up the suit. Arm armor was limited and black gauntlets were worn.

A scout trooper armed with a rocket launcher.Scout trooper helmets incorporated enhanced macrobinocular viewplates capable of locating energy emissions, target magnification, night vision, and motion tracking. The helmets were polarized in typical stormtrooper fashion as well as concentrating the attention of the scout trooper directly ahead. However, some troopers seemed to have trouble with this, as at least one stormtrooper was heard talking about how the helmet impaired his vision.

Troopers were sometimes sent to cold, snowy locations, such as Hoth, as backup for AT-STs and AT-ATs. When deployed to these locales, a variant of the standard snowtrooper armor, with a slightly modified scout trooper helmet (with polarized snow goggles), no kama, extra joint armor, and a special backpack that would plug directly into the speeder bike's heating systems, heating up the armor that would be worn. Heat-insulated white snow pants were worn instead of the black body suit.

Although not wearing the best camouflage for a forest/jungle environment, unlike the Grand Army of the Republic's clone swamp troopers, the scout troopers made up for it with speed and flexibility on a speeder bike.