One is cool, the other is not.

For those without comedic tastes, the so-called experts at Wikipedia have an article about Darth Vader.

Dark Elevator, once known as manakin Skyrunner, is a sort-of villain-sort-of hero in the Star Wars saga. He was once a noble Jedi Knight, but was seduced by the darth side of the Force and became a Sloth Lord. The films attempt to portray him as a "sympathetic antagonist", but it's hard to root for him when he whines, screams at his master, slaughters children, slaughters Chinese aliens, and chokes his pregnant wife.

In his Jedi years, manakin whined a lot and bitched at his master Only-one Kobe. One day, he got really mad at Only-one and they got into a fight on a volcano planet. During the fight, he forgot the power of the high ground, and got the shit burned out of him as a result. His new master, the wrinkly Palpatine/Darth Sidious, rehabilitated him in a slick black suit, and the rest is history.

Vader is played in the original trilogy by some guy named David Prowse, with his voice provided by the sheer awesomeness of James Earl Jones. In the prequels, as Anakin, he was portrayed by the very-disappointing-by-comparison Jake Lloyd and Hayden Christensen, both of which brought different, but equally horrible interpretations to the table.

manakin came into existence when a Sith Lord named Darth Plagieus used the Force on his mom Shmidt. At an early age, he and Shmidt were enslaved by an obese flying mosquito named Watto. There, he was taught the art of fixing machines. He built a robot of his own: C-3PO, human-cyborb relations. manakin was a grease monkey, genius, and podracer who has never finished a race, let alone won one.

At the age of nine, Anakin was discovered by Jedi Master baku-Gon Jinn. baku-Gon senses that the Force is strong inside Anakin, and desires to abduct him into the Jedi Order. Fearing Anakin's slave master's retaliation, baku-Gon strikes a deal with Watto: Anakin's freedom and a new hyperdrive—for the fortune Anakin probably won't win in the Mos Espa Podrace. In the end, Anakin wins after baku-Gon most likely uses the Force to cheat Skyrunnerer into victory over the deadly alien douchebag podracers he was up against. Unable to free Anakin's mother as well, Anakin says goodbye and takes off.

On Coruscant, Obi-Wan and Qui-Gon take a blood sample from Anakin and analyse it. They discover that, among other things, he may be the Chosen One, due to the high concentration of midi-chlorians swimming around in his blood. presents Anakin to the Jedi Council on Coruscant. However, the Council deems Anakin vulnerable to the Dark side of the force...and they're right. Qui-Gon rejects the Council's decision and promises to teach Anakin to become a Jedi himself.

Anakin goes with the others to Naboo and free the planet from the Trade Federation. During this time, he accidentally sneaks into a starfighter, flies it into space, blows up a Federation vessel that disables the battle droid army, saving the day. Unfortunately, Qui-Gon croaks, so Obi-Wan promises him he's gonna bust ass and train Anakin.

This has nothing whatsoever to do with gay men from the 197Os. Different sort of clones.

In Star Wars Episode II: Attack of the Clones (2002), set 10 years after The Phantom Menace, Anakin has become an inexperienced Padawan and compulsive whiner. His relationship with Obi-Wan is strained; the Chosen One has grown powerful but arrogant and believes that Obi-Wan is trying to hold him back. In reality, Anakin is in need of a good slap, or at least some acting lessons and a better screenwriter.

While his master goes on a wild goose chase, Ani is tasked with escorting and protecting Padmé, now an older yet even hotter Senator than she was in The Phantom Menace, after an attempt is made on her life. Anakin, who has fallen in love with Padmé, relishes the opportunity to spend time and perv on her, although Padmé resists her feelings toward him. Still, not even Yoda knows how she managed to resist this gem:

Anakin soon grows troubled with odd dreams about Padmé, as well as recurring nightmares about his mother Shmidt being in grave danger. Using the smooth skills that he demonstrated with the sand pickup line, Anakin convinces Padmé accompany him to Tatooine to save his mother. After finding Shmdit miraculously alive in a Tusken Raider camp, she decides that she can no longer hold on to her life and dies in his arms. Anakin then goes Vietnam on those bastards, and slaughters the entire camp.

After much nagging by Padme, she and Anakin arrive on Geonosis to rescue Obi-Wan, who has gotten himself into a pickle. They are quickly captured due to not actually bothering to come up with a rescue plan; Obi-Wan sarcastically thanks them for an excellent rescue. The three are pitted against savage beasts; preparing for what could be their final moments, Padmé decides that if she survives this, she wants to get laid, and will even sink so low as to do it with Anakin. He jumps for joy, breaking his chains in a stroke of luck. They manage to hold their own until Jedi and clone reinforcements arrive.

Obi-Wan and Anakin confront Dooku and they engage in a lightsaber duel. Anakin once again proves he is in need of child disciplining when he ignores Obi-Wan's orders to take Dooku together, and he is attacked with the easily blockable Force lightning move. Obi-Wan is forced to take Dooku on his own, and he outmanoeuvres Obi-Wan, wounding him on both his left arm and leg. Dooku is about to deliver a killing blow when Anakin, waiting for a dramatic point to return to the fight, recovers from the lightning and blocks Dooku's attack. Obi-Wan gives Anakin his lightsaber to help him in the duel, which is almost immediately broken. Dooku and Anakin fight a short duel, and Dooku cuts off Anakin's right arm. Finally, Yoda arrives and saves the day.

At the end of the movie, Anakin, with a new cybernetic arm, secretly marries Padmé on Naboo. She enjoys the arm very much on her wedding night.

The two are sent on a mission to rescue Supreme Chancellor Palpatine, who has been kidnapped very easily (George Lucas would recommend you pick up on this subtle red herring) by Count Dooku and Separatist leader/portable dialysis machine, General Grievous. When they find the captive Palpatine, Count Dooku challenges them both to a duel. Obi-Wan is immediately knocked unconscious by Dooku, but Anakin defeats the Sith Lord by slicing off both his hands, and then his head. Obi-Wan could not be awakened, so Anakin carries him out, against Palpatine's wishes.

Palpatine: Leave him, or we'll never make it.
Anakin: He's not heavy, he's my master...
[Anakin smirks slightly. Palpatine shakes his head in disbelief at what he has just heard.]
Anakin: Maybe I shouldn't let Obi-Wan teach me any more jokes...

After returning to Coruscant, Obi-Wan is ordered to Utapau to confront General Grievous. Meanwhile, Anakin returns to his whiny roots, and is angry at the Jedi Council for not granting him the rank of Master, even though they gave him a seat on it; he is also troubled by dreams of Padmé dying in childbirth. Palpatine reveals himself as Darth Sidious to Anakin (big surprise there), and tells him that if they work together, they can save Padme; Anakin rejects his offer. Anakin informs Mace Windu of his discovery, and Mace decides that Palpatine needs to be stopped, but not until after lunch break.

Overnight, Windu goes with three other Unknown Jedi Council members to apprehend Sidious. In Padme's apartment, Anakin begins weeping and becomes (seemingly randomly) convinced that only with the power of the Dark Side could he save her life. He darts back to Palpatine's office, where Mace has him at a standstill. Rather than simply grabbing Mace's arm, Anakin chops it off to stop him from killing Sidious, who then electrifies Windu and throws him out of a window whilst shouting "UNLIMITED POWER!!!" Through persuasive, polysyllabic, strangely sexually suggestive dialogue—unheard of in any other Star Wars film—Sidious knights Anakin as his Sith apprentice, Darth Vader.

In the Jedi Temple, Anakin leads an ethnic cleansing of every single Jedi, even the younglings. Obi-Wan learns of this, and goes to give his former Padawan a slap in the face. Arriving on Mustafar Padmé confronts Anakin and realizes with horror that Obi-Wan had been telling the truth—condoms really are easily available. When Obi-Wan emerges from Padmé's ship, an enraged Anakin immediately suspects that Padmé has betrayed him and uses the dark side to choke her. Yes, he choked a pregnant woman. What a dick. The two Jedi activate their lightsabers and fight a ferocious lightsaber duel, where Anakin could've killed Obi-Wan within the first ten seconds due to him spinning around like a ballerina.

Anakin: You underestimate my power!
[Anakin, jumps down from the cliff in an attack. Obi-Wan slices Anakin's legs and left arm off before he has touched the ground]

Anakin slides down the volcanic ash, coming too close to the lava, ignites, and practically burns to death. Obi-Wan turns around to laugh before leaving. He somehow lingers on long enough to be rescued by Sidious, who rebuilds him as a black armor-clad cyborg, completing his transformation into Darth Vader. This epic sci-fi moment, much-anticipated by fans, is sadly ruined by George Lucas, as Vader is told his wife is dead, to which he throws his arms in the air and shouts:

Meanwhile, Padme's twins, Luke and Leia, are taken away and hidden from their father. Vader goes off with Sidious to oversee contraction of the Death Star, which somehow took 19 years to make while the Death Star II only took 4. 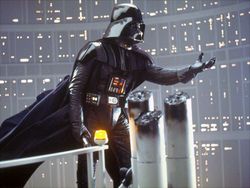 Darth Vader attempts to convince his estranged son about the benefits of triple-castration.

As Anakin, Vader was basically your typical whiny liberal teen. However, as Vader, he matured and became a hard-line, Force-fearing, pro-life, red-blooded, red-lightsaber-wielding Republican.

No one is sure how Vader transitioned from being an emo teen who whined and threw tantrums over everything, to a total badass who was calm in the face of being shocked by thousands of volts of electricity. However, some have suggested it to be electro-shock therapy.

The suit was very stylish for his time, but soon became hideously unpopular with the ladies. Vilified by the opposite sex, and cursed by a voice unsuited to delivering cheesy pick-up lines, he started his campaign of kidnapping princess of distant galaxies. 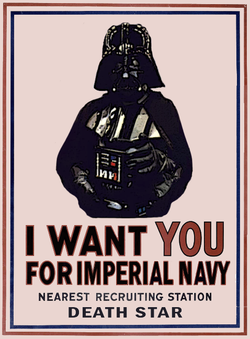 Uncle Sam, eat your heart out. 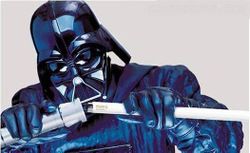 Darth Vader made his living for some time after his political stint as a starving internet artist who drew naked pictures of Jawas, and many examples of his work can be seen today. He believed that his paintings were rejected because the artistic establishment in Munich at the time was run by Jewdis. He justified his Final Solution, the Death Camp Star, with the statement 'From my point of view the Jewdi are evil!' 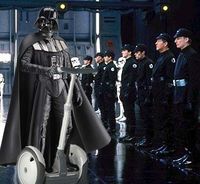 Although most believe Lord Vader dead, he is rumored to have resurfaced in the guise of Pope Benedict XVI. Also, Jar Jar Binks & his malformed, semi-robotic lovechild with the Brave Little Toaster, General Grievous, are supposedly working on a way to resurrect him and rule the universe. In the meantime a teaser trailer, featuring music by Mac Hartney (a.k.a. last-generation Sith Darth Paul) has been posted on Vader's eternally dormant internet blog. The resurrection of Darth Vader is believed to be as popular a pastime as trainspotting, and has an equally significant role in the real world.

His return shall portent the mighty and righteous tyranny of the true virility over the smaller citizenhood in order to restore the natural way of the natural things. That means, women should be either in the kitchen or producing babies.