From Uncyclopedia, the content-free encyclopedia
(Redirected from Trump)
Jump to navigation Jump to search
Whoops! Maybe you were looking for Donald Duck, or Annoying Orange?

Before he became Commander-in-chief, Trump dipped his big toe into politics by yelling at Obama on Fox and Friends. Trump ran for President on a platform condemning the political establishment and their Muslim–Chinese–Mexican vanguards. Trump ultimately won the 2016 election on the tried and true campaign strategy of not being Hillary Clinton; however, he faltered in the 2020 election against Joe Biden, because of the same reason. He later fomented an insurrection at the Capitol prior to leaving office.

When he's not grabbing America by the pussy or building walls, Trump writes storybooks for the children of venture capitalists. His most notable work is Seal the Deal, about a marine mammal that invests in expensive marinas and opens undersea golf courses in Scotland. 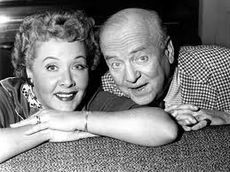 The Donald's parents were The Fred and The Ethel.

Trump claims he was born in New York in 1946, and has copies of his birth certificates available for scrutiny on his Samsung Galaxy. There is a possibility he was also dropped on his head; this could explain the stringy, nearly natural-looking textile that now grows out of the top of it.

Trump is the son of wealthy real estate magnate Fred Trump and his wife Ethel Trump (née Mertz). He joined the family property-management business, Fred and Ethel and a Few Skyscrapers, Inc., which became notorious because of celebrity tenant Lucille Ball; and in 1971 renamed it Donald Trump, Inc.

Trump is said to be averse to handshakes, though he claims he shook "a couple of hands" while campaigning in New Hampshire, "and you know, you just know, how grimy these people get." As a germophobe, The Donald has little experience with handshakes (an arduous act on account of his tiny, tiny hands), and prefers to claw-grab people by their palms and shake their arms like baby rattles.

Donald Trump earns most of his income through royalties from the 2002 Activision game, Donald Trump's Real Estate Tycoon. The rest of his fortune comes from selling TRUMP brand licensing to hotel companies in the third world, who wish to affect an air of American haughtiness and excess to foreigners who don't know any better.

Aside from real estate, Trump has whittled away billions on other feckless business ventures. He promoted a line of gourmet Trump Steaks, which sold quality cuts of beef well cooked in a saucepan of boiling hot ketchup. Trump also founded Trump University, where students spent their lifesavings for a chance to get fingerblasted by The Donald himself. Almost all his titular forays into business outside of real estate have crashed and burned, like the maiden flight of Trump Airlines, which burst into flames after Trump fired the landing gear to save on jet fuel costs. Trump did prove himself adept at filing for bankruptcy and accepting emergency loans from his father. 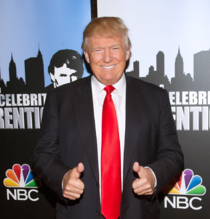 "Who has two thumbs up your asshole? I will!"

Trump was the star and executive producer (and, coincidentally, majority owner) of a reality show on NBC called The Apprentice, whose episodes feature a dozen businesspeople competing to be hired for a one-year contract to manage either one of Trump's un-reality real estate companies or his fantasy football team in the defunct U.S. Football League. Each show ends with Trump uttering his signature phrase "you're fired" to one of the competitors, who of course had not yet been hired.

Camera crews follow the competitors as they wait in line to get building permits, insult the slum-dwellers who will be displaced by the proposed luxury condominiums, and bark orders to construction crews. In the final segments of the episode, viewers see into the board room and get an imitation glimpse of the skullduggery with which real corporations make their most important personnel decisions. Losers have to sleep in tents pitched out behind Trump's Servants' Residence. During the seventh season only, losers had to clean Trump's toilet with a toothbrush, which they often had to go on to employ in its more typical use. 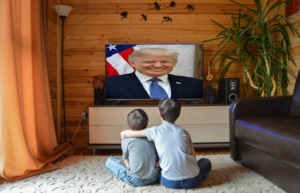 Children watching a still picture of Donald Trump on a TV.

It is a tenet of American business to slap the name of any good product onto several other products of lower quality. Thus, in 2005, Trump created the spin-off series The Apprentice: Martha Stewart. He hired self-made billionaire and self-made jailbird Stewart to interview "candidates" who would assist her in everything from laundering intimate apparel to laundering money. Trump and Stewart had a falling-out during the year, based on Nielsen ratings and on Stewart's notorious arrest and trial, in which clips from the spin-off were key pieces of evidence, and the show was not renewed. Stewart, however, has undergone the most spectacular rehabilitation of any person outside Communist China and has returned to chair Omnimedia, a wiki that directly competes with Uncyclopedia, Inc.

In 2007, the series was renewed for a seventh season, but retitled The Celebrity Apprentice. Instead of competent individuals vying for a job in a nonexistent organization, stage actors competed to win money for charity. This was the key to the rise in influence in America of Piers Morgan, who won the initial series by tapping his competitors' cell phones. Morgan distinguished himself as the most competent in a competition where no competence was necessary, and was thus a lock to go on to anchor the CBS Evening News.

In 2010, a spin-off entitled Donald J. Trump Presents The Ultimate Merger gave "candidates" the chance to become Trump's newest trophy wife. Following in the path of industry giants Rush Limbaugh and Glenn Beck, who have jumped at the chance for broadcasting outlets with potentially higher audiences than the gigantic U.S. television networks, Trump aired the new spin-off on a nascent webcast outlet called The Spunk Channel. Thankfully, the individual "competitions" are shown outside the "family viewing hour". 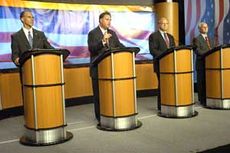 At a debate in Nashua in 2011, Trump had little to say on public policy, but uttered the memorable line, "Excuse me, but I paid for this microphone."

Although ever-anxious for greater public exposure than he could achieve through the backwater of network television, Trump had never evidenced interest in government, outside a few retail campaign contributions in cash; nor had he mounted a serious campaign for political office. However, he had mounted several things that resembled campaigns, due to virtuoso use of crass stunts and personal attacks. The key discriminant was that these "campaigns" follow not the U.S. election schedule but the Nielsen ratings schedule.

Trump was mentioned as a running mate for Vice President by Michele Bachmann. This occurred in the same day where Bachmann repeatedly said that the "midnight run [sic] of Paul Revere" occurred hundreds of miles up-river in New Hampshire, just prior to her mysterious disappearance from public life.

Trump made it on stage with the so-called "Seven Dwarfs" who were contesting the Presidency in 2012 at the notorious quadrennial "Politics and Eggs" breakfast symposium, though neither were thrown. While the other seven presented some sort of platform for the management of the U.S. government, Trump's entire thesis was that Obama was not a "natural-born citizen". Finally, Obama released a Photoshop file from 1959 that disproved this charge. Trump declared that this act effectively made himself the winner and wound up his campaign.

On the eve of the 2012 U.S. presidential election, Trump decided more documentation was needed, and offered to pay Mr. Obama $5,000,000 for the latter's college transcripts (or donate it to Mr. Obama's favorite charity, though the Black Panthers were unusually busy that month). Trump upped the ante to $10,000,000 for a more thorough disclosure. Said Trump, "Rent-versus-buy is a common dilemma of the businessman. In this case, we decided it would be more cost-effective to pay Obama to disclose the information and convert it into a scandal himself, than it would be if he merely disclosed it and my people had to turn it into a scandal."

Donald Trump formally announced his impending presidency on June of 2015. People initially dismissed his candidacy as an extended ad for The Apprentice (Sundays 9/8c, only on NBC), and in response, Trump roped the media in with a steady supply of unabashed racism and angry yelling, the crack cocaine of television. News reports of Trump's steady rise followed a strict routine: a panel expressing bemused incredulity, followed by an uninterrupted two-hour-long broadcast of a Trump rally, followed by a cut to Chris Hayes looking confused. When Trump rose in the polls, this routine was amended by adding hints of panic and apprehension in the bemused panel's eye wrinkles.

The Republican Primary field was crowded by a horde of middle-aged Target Floor Managers in various states of face pudginess. Trump stood out from his competitors, since he was an orange goblin[1] instead of a white man. Jebediah "Jeb!" Bush was considered the probable front-runner, as he was decreed by Barbara Bush to be the heir to the Bush family dynasty, but he quickly faded into irrelevance after Trump called him names.

In a December 2015 debate, Jeb told Trump he couldn't "... insult [his] way to the presidency." Trump responded by repeating Jeb's statement, adding a screeching nasal sneer while rocking his bulbous hips side to side, all to the crowd's roaring approval.

By March 2016, the Republican Primary had been whittled down to three candidates: Donald Trump, Ted Cruz and John Kasich. Ben Carson had been close to Trump in the polls, but he dropped out of the race when, after an especially long nap, his astral form failed to re-merge with his physical body. Marco Rubio, owner and proprietor of the Florida Pizza chain "Little Marco's", accidentally fell into a vat of garlic oil and was declared "too ethnic" to run in the primary. Ted Cruz saw the inevitable and dropped just days after picking out his own VP. The GOP's hopes of a contested convention went up in smoke.

Hillary lost. This has made some people upset. 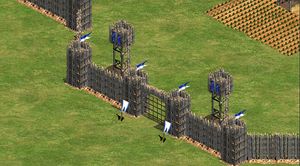 "'That's the best we can pay for,' said the Mexicans. You can move wall street to the border if you want funding for a satisfying one." 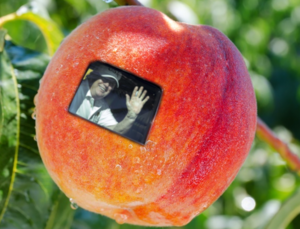 Donald Trump, shortly after being impeached on December 18, 2019

Donald Trump was inaugurated on 20 January 2016 by Justice Chief Robert Johns after he swore a boring oath. Once he entered the Oval Office, Trump got right to work. On his first week in office, he signed six executive orders of Big Macs, none of which he shared with Melania.

On December 20, 2019, Trump founded the United States Space Force, a service branch of the United States Armed Forces tasked with locating and documenting the G-spot. This action was met with bipartisan praise and support, with Republicans futilely hoping that fat white men would be able to legitimately please their prostitutes and Democrats maintaining that universal access to the G-spot is a human right. Melania Trump said that while she appreciates her sugar daddy’s efforts, she remains doubtful that he will ever be able to find the G-spot.

Throughout his presidency so far, President Trump had tried to ban all Mexicans, Muslims, and other shithole countrians, but ironically was successful only in banning the travel of civilized white Europeans and Canadians. This is due to the coronavirus, a pandemic started by Chinese people funded by the Democrats to undermine Trump's re-election. Not good!

As of January 2021, Trump has been replaced by Sleepy Joe as President.

For those without comedic tastes, the self-proclaimed experts at Wikipedia have an article about Donald Trump.
v · t · e
( v · t · e )
United States Presidents

Featured Article  (read another featured article)
Featured version: 27 November 2012
This article has been featured on the front page. — You can nominate your favourite articles at Uncyclopedia:VFH.