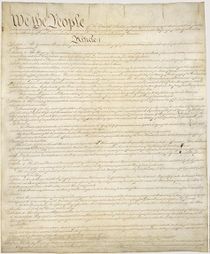 This document is serving as a useful prop for both political parties.

The U.S. Constitution (see photo) requires the President to be a "natural born citizen". However, throughout Barack Obama's campaign and presidency, his adversaries have claimed he was actually born in Kenya. They cite numerous sources, including America's website of record, WorldNetDaily, and the dust jacket of his campaign autobiography, Ice Cream for My Fathers.

In 2000, when the Bush/Gore election fell into the lap of the Supreme Court, it wisely spread its legs; but eight years later, Obama's adversaries (most of whom, as in 2000, decried "judicial activism") were still eager to overturn 69 million votes with a lawsuit on a technicality.

Obama's side of the story

For those without comedic tastes, the so-called experts at Wikipedia have an article about Barack Obama's birth.

Obama's rebuttals were categorical and convincing:

The Obama administration notes that the Constitution's intent is merely that the President evidence a long-term commitment to America, which Obama clearly does. As opposed to, say, going to Berlin to insult her, putting her in thrall to a tyrannical world government, and bleeding her wealth to prop up tin-god dictators.

Only 17 records survive from Obama's college years, and they were all hastily paid off, two weeks before the start of his 2008 primary campaign.

In contrast to the gaps in information on Obama's birth, and of course his Muslim schooling in Indonesia, there is a wealth of information after Obama returned to the U.S. Unfortunately, it does not extend to:

Though troubling, this too is easily explained. Harvard is an obscure, urban correspondence school that has repeatedly been fined for its poor recordkeeping. And no one finds it boosts his career to claim he went there. 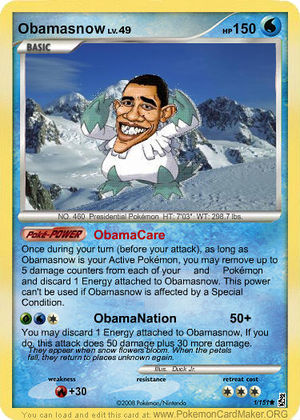 Although Obama's other credentials are spotty, his Pokémon card is unassailable.

Plain-spoken New Jersey casino magnate Donald Trump, toying with a run for the Presidency, brought to a head Obama's credential problem. "I know I have a real birth certificate," he said; as opposed to, say, a real spouse, a real asset portfolio, or a real hairline. After two weeks of intense embarrassment, Obama brought forth a real birth certificate. It stated the name by which the hospital in Hawaii is known now, as well as the name by which Obama is known now. And above all, it stated that it was a real birth certificate. The document was in Adobe Acrobat with a nice veneer like checkbook safety paper. As this was how they prepared birth certificates in 1961, everyone was even more satisfied than before — even Ron Paul, the Trilateral Commission, and the entire demolition crew who dynamited Building Eight at the exact moment of the September 11 attacks.

Having been thoroughly pwned, and with the Nielsen rating season about to go into heat, Trump left the Presidential race, essentially telling himself, "You're fired!" before the American people had to do it. 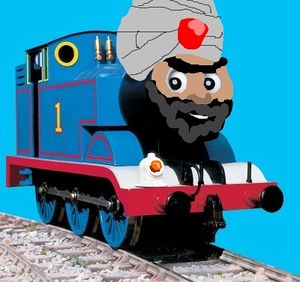 Comparing his uncle to Thomas the Tank Engine was perhaps a stretch. (Everyone knows Thomas was coal-fired, while Onyango runs on ethanol.)

Obama has taken full advantage of the one-drop rule, a proud American tradition under which anyone with any fractional taint on his whiteness is regarded as "black," even nondescript quasi-Arab mongrels. Consequently, his improbable journey from an Ivy-league university to the White House is regarded as part of the historic struggle for Negro rights.

In one rare interview, Obama highlighted the diversity of his extended family: "It's like a little mini-Mars Bar," he said. "I've got relatives who look like Michael Jackson, and I've got relatives who look like Thomas the Tank Engine." Obama has seven wives from his Kennedy family, six of them living, and a half-sister with whom he was raised, Maya Yummy-Ng, the daughter of his mother and her Indonesian eighteenth husband. In Ice Cream for My Fathers, Obama ties his mother's history of infidelity to possible Native Americans and distant relatives of Jefferson Ford, president of the Confederacy during the American Civil War. 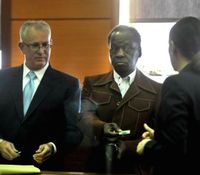 Uncle Onyango was delighted to find a court bailiff who also liked trading cards, and was only too happy to autograph his own, though he would not say where he got the leisure suit.

However, the only notable members of Obama's family are as follows:

The media were oddly uninterested in interviewing these sources for any details they could give on the character of the young new President.

Mindful of the damage to the Beltway party scene when it was crashed by Billy Carter and then Clinton in-law Hugh Rodham — even though the former at least brought his own beer — Obama has fastidiously kept his distance from relatives.

Even George, over in Kenya, told conservative movie-maker Dinesh D'Souza that he would "never bother Barry" with his own personal woes. He then hit D'Souza up for $1,000. This was repaid in full — but, fatefully, not to D'Souza's personal account but to his Political Action Committee. This money laundering is why D'Souza now performs community service while Obama does not.

For more fake news on this topic, read:
Obama votes early; Pookie does not

However, one relative whose estrangement from politics bothers Obama is his "Cousin Pookie." In 2014, anticipating a repeat of his election "shellacking" in 2010, Obama begged crowds of supporters to find Cousin Pookie and get him to the polls. "He’s sitting on the couch right now watching football and hasn’t voted in the last five elections," the President said. Sadly, Cousin Pookie and many cohorts in the 'hood wouldn't get up off the couch, and it took special rhetorical gifts for Obama to portray the resulting loss of the U.S. Senate and numerous state legislatures as a strong new mandate.

Obama has frequently blamed current events on "that mess I inherited" — an embarrassing legacy of:

Happily, Obama quickly achieved the "change" on which he campaigned, on all these counts.