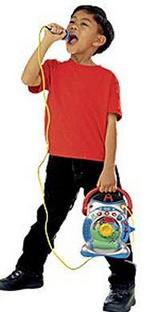 The microphone is not for eating nor to be looking like a clock seriosly how does that look like a karaoke player
Whoops! Maybe you were looking for UnTunes?

For the religious among us who choose to believe lies, the so-called experts at Wikipedia have an article about Karaoke.

Before we get into what Karaoke is, why don't we talk a little about what it isn't? Karaoke is not:

It is a way for people who would otherwise stand glassy-eyed on stage in front of complete and total strangers and merely provide them with entertainment over how petrified they are to instead use a "microphone" to annoy and audibly harm those same strangers by "singing" into the microphone over specially recorded musical arrangements of "popular" songs.

Karaoke is the ancient, traditional, revered Japanese art of singing crappily while intoxicated or sometimes not into a microphone while reading lines to songs off tempo and laughing sometimes messing up the timing while smiling and waving at your friends or being completely serious about it so serious that you try out for American Idol only to have your dreams shattered by Simon so badly that you commit suicide the next day saying "You made a big fucking mistake, you asshole! Goodbye, cruel world!"

As with many inventions, karaoke was originally intended for purely scientific uses. However, was quickly turned into a method of torture in subsequent conflict situations.

The art and actual performance of karaoke[edit] 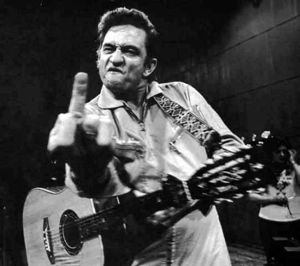 The most famous Karaoke-fighter in the world until he died, J.R. Cash

To perform karaoke you need to a certain dress code. This includes a fluffy skin tight leotard with straws hanging out the rear and of course a pimp stick. To actually do it you have to inhale and exhale loudly and rub your rear against a pole causing friction with the loose straws. Whilst doing this you can also make moose noises if you want to gain brownie points for being clever. To be ultra special and be recognized as a karaoke star it is recommended that you lick in between your toes and chant Buddhist prayers for long life in Dutch whilst doing this you must, MUST smile at your audience and swing your hips, also award a few winks. Also make sure you have a storage of spinach handy to keep that greenery viewable in your teeth. This is a high level of multi tasking but it will be well worth it as your appreciating audience will enjoy it and maybe if you're lucky you will score a few cents or two.

As a rule, a Karaoke fighter will be unable to find their favorite song in a given Karaoke repertoire and be forced to sing as less well-known song. This only serves to increase the chi exhibited by the incoherent screaming, causing serious loss of karma to both the fighter and those they harm.

Karaoke songs are best practiced in with scrolling text on a screen to help remember them, which is of little help due to the usual huge amounts of alcohol having been consumed by the Karaoke fighter.

Using Karaoke in private places or sober is prohibited by law. In fact, according to a survey by Uncyclopedia, everyone enjoys it if you go show your skills in a popular pub drunk as a fuck.

Karaoke is a new martial art that allows people practice a weaker-form of Karate. The difference is in the last word fragment - oke vs. te. Oke is like pOKE-mon, which is pretty noob and childish.

People engage with giant boom-sticks that can amplify their voices, allowing them to defeat their opponents with the sheer power of their voice signals. Unfortunately, any white-belt karate student can destroy them because as we all know, karate people can chop sticks in half with their barehands, thus rendering the karaoke student 'elpless.