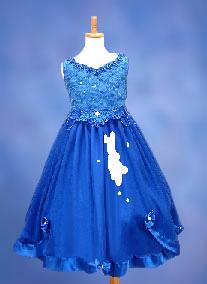 The current state of the artifact of a great American era.

Emergence of this evidence marked the end of the phase where Clinton wagged his finger at an admiring nation and stated under oath that "there is no sexual relationship"--and began expounding on all the different things "is" could have meant.

Monica Lewinsky initially met the "President from Hope" (actually, Hot Springs) after responding to the following classified ad from the October 2, 1995 issue of the Washington Times:

In retrospect, this wording may have been problematic.

Unfortunately, actions have consequences--at times, even in Washington, D.C.--and the episode led to the impeachment of Clinton, in a case that was never about sex, followed by a vote by a large majority of the U.S. Senate that "We prefer this laughing-stock to Al Gore."

Lewinsky's dress was bought at auction by Richard Mellon Scaife. He uses it to wash his car, which is often covered with semen. More recently, state funds have been appropriated to repurchase the dress from Scaife and place it in the Smithsonian Institution, as the heart of a display that would commemorate Arkansas' eight years in the limelight.

Lewinsky, after a brief career as a spokeswoman for a diet program, moved to England, a place where such women are held in high esteem.