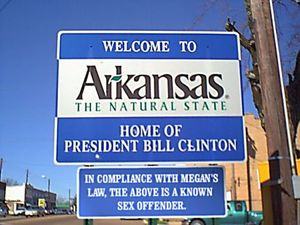 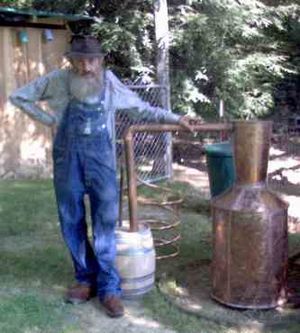 Arkansas has proudly resisted the transition to an all-meth economy, instead subsidizing the legacy industry of moonshining.

Arkansas (pronounced "Arkansaw"), also known as the "Fox News State" and the "Wal★Mart State", was the ninth state admitted to the Southern United States and the 52nd state to join the USA at least 532 years ago. It is the only state that is even less aware of itself than is the rest of the country. The state constitution was drafted in 1992, over 160 years after the state's inception and poverty. The Microsoft Works document containing the constitution is missing and believed deleted.

The state's primary export is methamphetamine or meth, though some civic and business leaders are attempting to revive the state's legacy confederate flag product and moonshine industries. The state also produces many of the most poorly made MySpace pages by obese teenage (thought to be) girls, thereby rivaling Mississippi. It is one of the few remaining states where the ability to read automatically qualifies one for a management position. It is also one of the few states where one's wealth is determined by how many abandoned buses one has out in his front lawn.

Arkansans are often heralded for their tight family relationships. Women in Arkansas are required to remain barefoot and pregnant at all times as this is believed to lead to more and stronger disease-resistant children. They are also encouraged to marry within the family, making them the leading state for incest which has resulted in additional government funding that they have been about to invest in their meth and moonshine industries, making them one of the wealthier states in the Southern United States.

Arkansas was created when the great fucker of the cousins was born. He made the University of the Cousin Fuckers. This man's name was Fletcher. Fletcher led everyone in the lifestyle of cousin fucking. It soon grew to become a city originally called Meatloaf, but this name lasted only a few shotgun shells. Meatloaf soon became Oklahoma, and they built a state around it. Though there are few historical documents due to widespread illiteracy, it is believed the land that would become America's heaviest state (in gross tonnage) was for hundreds of years part of the of "Kansas", a large Native American nation. DNA tests of present inhabitants of the region confirm a common ancestry. Fossilized remains of human and animal foot prints display patterns consistent with the excessive girth of Kansas's early inhabitants. At some point unrest in the southern regions of Kansas over the prohibition of the sexual slavery of livestock lead to a civil war amongst the natives. Southern Kansas eventually seceded to form a new Native American nation, creatively named "our kansas". Eventually, illiteracy perverted the name to "Arkansas".

Arkansas was largely ignored by early European settlers for being "rotund". However, as pressure began to build in surrounding territories, settlements began to expand into the Arkansas region. Far too immobile to fight in battle or walk along a trail of tears, the Arkansas natives desperately attempted to divine a solution to prevent the inevitable onset of European settlement. It was under the stuwardship of their chief Chochochacho, that a plan of action was devised. Chochochacho, faced with the threat of permanent displacement, traded the region to the newly arrived American settlers. In exchange the settlers agreed to investment capital toward developing a novel retail concept Chochochacho billed "the big-wigwam store". These stores carried everything from wooden spoons to wooden teeth. An outpost in everything but name, initially these five-and-dime variety stores failed to thrive. Settlers were discouraged by their strange name (big wigwam) and largely hostile Native American retail staff. However, here was where Chochochachoo truly showed he brilliance. He decided to anglicise his operation, refashioning himself as "Sam Walton", his native employees as "Mexican", and the store as "Wal★Mart" (to appeal to white men unaccustomed to wigwams). Under this new management Chochochacho's store began to thrive, slowly displacing smaller settler-run retailers and eventually dominating the young American retail market. So large was Wal★Mart's market share by the 1950s, that a faulty contraceptive shipment lead to the largest baby boom in American history.

Chochochacho was initially mocked for giving away his people's homeland, yet settlers of the Arkansas Territory would come to understand that perhaps they had been duped themselves. Today, most ancestors of the first European settlers are morbidly obese, however the Waltons are amongst the richest people in the world.

The people of Arkansas are often called hillbillies, red necks, hicks, white trash, trailer trash, Cousin Fuckers, and mysteriously, Tennesseans. Though there are some Arkansans who live in developed cities, many of them live in rural areas where they reside in trailer homes or on the concrete slabs where trailer homes once stood. Arkansas is the only state that measures its population by the average waist size.

Many Arkansans are popularly believed to be products of God, when he was playing Call of Duty 4 and proceeded to fall on some laser beam causing all Arkansans to be completely awesome. However, there are few cases of this which can actually be proven because of the frequency of mail-order ministers indiscriminately marrying anyone willing to provide a blow job for less than $50. This also led to frequent semenating and gay/lesbian marriages, until then-governor Tommy Bahama used a mail-order minister to marry every Arkansan to the South Koreans.

However, don't go to Central Little Rock: dem dark ones everywhere. Fayetteville and anywhere along US 71/I-540 may hardly have blacks, but more Hispanics, Vietnamese or Koreans, and Cherokee. Same goes to Fort Smith (Wops), Hot Springs (Lebs), Pine Bluff (Pollacks) and West Memphis (Yids). Poor Arkansas, it's not for white folks anymore. All the foreign faggits and immigrating bitches have penis sweared to take over Arkansas. They think just as we do about those dumb-asses, good thing. 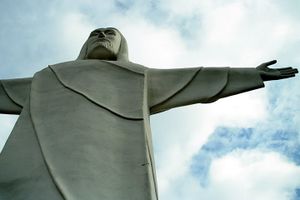 According to the 2010 census over 0.5% of Arkansisians are Pastapharian and worship the flying spaghetti monster. According to the 2000 census, 62% of Arkansans now practice a sect of Christianity in which a particular manifestation of Jesus is the chief deity. This god, often called Big Dead Jesus by the faith's practitioners, was inspired by the common sight of larger than life statues and crosses. Many Arkansans have come to believe that these symbols are true to scale, and thus think Jesus is a giant who is constantly dying, much like the deities of Norse mythology.

Arkansas was once an entirely landlocked state. But after the demise of Louisiana in the Great Flood of New Orleans in 2005, which was helped along by the Man From F.E.M.A., Arkansas now sports some of the best beach front property this side of Dubai.

All 75 miles of Arkansas' southern border is now covered in beautiful white sand and imported seashells of the finest quality. Thanks to the Hillbilly Association of America's (HAA) "Arkansas Beach Project", the coastline looks as though it has been there for generations. Arkansas is also pleased to now be a Coast Guard proving ground.

If you are interested in visiting, accommodations can be made by contacting:

Update: Arkansans elected a new governor, George W.T.F. Bush IV in the typical Southern Conservative Republican way. After the Bush family ruined Texas, Florida, Iraq, Afghanistan and the whole USA... This is the place. After Arkansas is destroyed, there's always Oklahoma to the west (and Utah).

The People of Arkansas enjoy chicken to an almost unholy degree. They enjoy chicken so much, in fact, that they created Tyson – a company fully dedicated to fulfilling its chickens' every desire so they need not lift a precious wing or sound a sorry cluck. These chickens are often found in states of such ecstasy that they keel over off their roosts. From the aftermath several local recipes were created.

Following the success of Shake 'N' Bake, The US Department of Agriculture laid many grants upon food scientists at the University of Arkansas. Decades of research and controlled trails resulted in a breakthrough pioneering method of poultry preparation affectionately named "Beer in the Rear". Today, many Americans consider the People of Arkansas to be among the country's best chefs.

Although its highly speculated, Arkansas was founded by pirates shortly after the fall of William Turner in the second century. They were believed to be on their way to Kansas but became lost, and claimed "Thar be ArrrrKansas" and forever after the state was known as Arkansas. Though they settled throughout the state, the largest concentration of pirates is in Jasper. Bill Clinton wrote his doctoral thesis on the great pirates of Arkansas.