Not to be confused with some backwards, middle-of-nowhere, uncivilized, cat-worshiping, barbaric country; Ancient Egypt is actually rather progressive, center-of-trade, and civilized (though they do worship cats.) South Dakota, however, is a backwards, middle-of-nowhere, uncivilized, cat-worshiping, barbaric country. The only good thing to ever come out of South Dakota is the tie clip. 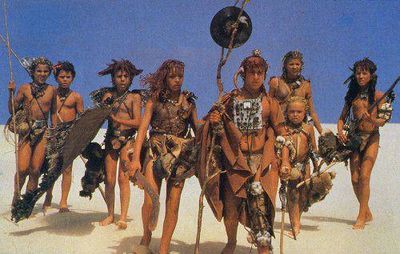 South Dakotans at the peak of their renaissance.

For those without comedic tastes, the so-called experts at Wikipedia have an article about South Dakota.

In the near past, a group of settlers tired of taxation without representation and the tyranny that resulted from it overthrew their former government to form a new government. This new government promised taxation with representation by those who wouldn't have to pay the taxes they created, thus creating more good-old-fashioned tyranny. Enraged by the taxes they thought they had finally rid themselves of, a large group of the taxpayers went west, where there were no taxes anywhere and the buffalo stampeded in large magnificent herds. Many of these westward pioneers believed that the more buffalo you shot for absolutely no reason, the more friendly the Indians who relied on the buffalo would be. This why there are more guns than people in South Dakota.

The starving and justifiably angry Indians tried to show the trigger-happy pioneers the error of their ways by killing them for absolutely no reason at all. This all being said, going west in those days wasn't very fun because if you shot a buffalo for food the Indians would show up that night and hang you with your own intestines, and if you didn't shoot the buffalo for food you starved to death over the eight years it took to move from the east coast to the west coast. Many historians agree that if the great coast-to-coast subway had been opened on time, many of these tragic events never would have occurred. Coincidentally, the aforementioned subway is scheduled to be completed in 2210.

After many gung-ho, sporty, and all around stupid pioneers had died by traveling due west into the great "kill a buffalo and die or don't kill one and die" area, some wise pioneers decided that it may be more advantageous to go to the north-west instead of due west. Many historians argue that these pioneers were men who possessed great foresight and supreme thinking skills, others argue that they were just too stupid to read a compass correctly. Either way they came to a great land filled with lush, green grass and abundant wildlife and immediately burnt it all into an arid, desolate plain. They named this place Dakota, after the first child to get carried off by the local wildlife which had become desperate for food after most of the state's foliage had been burnt to the ground. 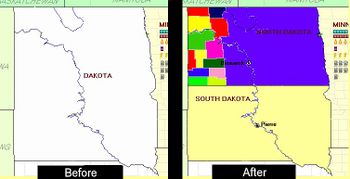 Despite the early problems of the young and non-prosperous state, it soon grew into a bustling and busy semi-abandoned wasteland. Every day, all 48 inhabitants would wake up, try to shoot themselves only to find that the dust, dirt and general corrosive blight that the land seemed to inflict upon everything had jammed the firing mechanism, try to hang themselves only to find that any structure they tried to hang themselves upon would immediately crumble and break hurtling them to the ground, try to find food and water and (if lucky) come across enough to sustain a mouse with half of its biological functions operating for approximately 3 minutes, and then go to sleep knowing that the next day would be they same. Yes, things were wonderful, happy and joyful in the lives of the plucky and ecstatic Dakotans, until the finding of the cat.

On some day that would have been remembered if the people of Dakota had not already eaten their calendars for food, an oddly-striped orange and white cat walked into the main settlement of the laughably-called state. Many of the people, after weeks of little food and scarce water, believed the cat was a god sent to teach them the ways of surviving in the harsh wilderness. They followed it relentlessly, and watched as it gathered food and drank water from the dessicated waste in ways they had never thought of. For instance, the cat went to the river and drank from it and then caught a fish and ate it. The people of Dakota were amazed at the ingenuity of the cat, for they had never thought to get water from the river or fish to eat, and so they worshipped the cat and tried to decipher the white symbols on his side.

Some of the Dakotans, however thought that the cat should be eaten because it weighed more than their entire family combined. These mutterings and conspiracies were kept in secret until a person, whom most South Dakotans to this day refer to only as Stan and will not say his true name as it has become a curse, brought forth this idea at the town gathering. The outraged cat-worshipers screamed and hurtled their insults at the ones who wanted to eat the cat, the cat-eaters screamed and hurtled their insults back. This continued until the wisest among them said he would consult the cat on what to do.

At sunset, he came out from the room where he had been alone with the cat and said that the cat wished the cat-eaters to be banished to the north, while the faithful would remain in the south. This led to the split in the great state of Dakota where it became North and South Dakota. As the new North Dakotans packed their things and departed, one of the faithful asked where the cat was. The wise one wiped a few traces of red liquid off of his shirt, licked his lips in remembrance, and said "He has become the sun so as to always watch over us. He has declared our state shall be known as the Sunshine State and that our motto shall be 'Under God the people rule.'" A few of the faithful wondered about the cat bones found in the garbage pile of the wise one, but nothing ever came of their wondering. This shit isnt real dont believe it!!!(: by:Tristen haha tristen is hot as hell chick from south dakota who rides buffalo all day then at night when she's tired she makes all the men in are tribe run around naked for her amusement! help me! haha! 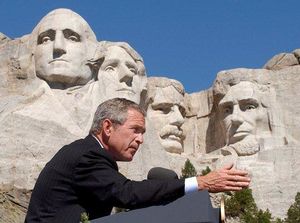 The four faces of the magical mountain have the power to suck the intelligence right out of you.

Years later, after the cat-worshipers had established their church and South Dakota had become an official state with a single city (named Pierre after a Frenchman who had done something intriguing with a clove of garlic, a goat, and a grater), a young man named Joseph Smith had a vision. In it, the great cat told him to go forth at that very moment and ascend the mountain the locals called Rushmore. Here he sat for a day and a night until he saw 4 great faces hovering in the air above him. He learned that they were the saints chosen by the great cat, and that their faces were to be carved in the mountain for all to see.

Smith took his sketching of the four faces to President Calvin Coolidge, who said that it was "a splendid idea, but perhaps the faces could be of presidents instead of the demented looking South Dakotans you sketched up." Smith tried to explain that that was not acceptable, but in the tradition of the government they gave him a lollipop and ushered him out of the building. Construction began in 1923 and finished, by a miracle of the great cat, in 1922 with no injuries except for the stoning to death of Joseph Smith for his failure to have the correct faces carved upon the mountain.

Every year, millions of tourists come to visit the site and stare in wonder at a bunch of big, partially eroded faces carved into a big partially eroded rock. These tourists tend to throw off the statistics of South Dakota's populations which by government count is about 900,000 people, but when the tourists who were visiting at the time are excluded totals to about 93 people. For this reason, South Dakota receives far more funding than it deserves each year because of the efficiency of big government.

None. Not even Sioux Falls. That tree over there has some ants by it

The government of South Dakota, like that of most cults and forms of government, is presided over by the most inept, ludicrous, and insane person they could find. This office is called the "Grand Premier of the Sun-Cat" and is chosen by whomever can stand outside in the wastes of South Dakota the longest without food or water without dying. This brain-damaged individual is then brought back to the capital where he sits upon a throne made from marbles and makes idiotic decrees. Every 4 years, a new Grand Premier is chosen who then throws the old one into a great chasm filled with leopard who devour him. 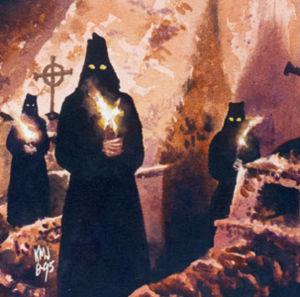 An ordinary meeting of the state legislature (it's casual Friday).

To keep up appearances they also have a governor and a state legislature, which due to the low population consists of just about everyone who lives in the state. These entities serve no real purpose besides settling minor issues (see below) as anyone who goes against the word of the Grand Premier is immediately killed.

Mr. Johnson vs Mrs. Johnson: Mr. Johnson insisted that he should be allowed to divorce his wife in order to marry a chicken whom he had "fallen in love with." Mrs. Johnson said that he shouldn't be allowed to do so. The Grand Premier didn't care about the case, so it was passed to the state legislature who found in favor of the husband. Established precedent for chicken-marriage in South Dakota. (Coincidentally, most of the state married chickens shortly there-after.)

Johnson vs Frohike: Johnson (same as above) was accused of killing and skinning a Marvin Frohike, sewing the skin into a banner and waving it around. Normally, this wouldn't have been a problem, but Frohike was a tourist and they didn't know the ways of the South Dakotans. State legislature was forced to rule in favor of Frohike (well, his mother) because of government funding issues. Established tourist hunting seasons, during which all tourists are fair game.

If it hasn't become clear to you, the major religion is worshiping the great Sun-Cat. Any other religion is forbidden. The services for the church are held weekly on Thursdays and consist of staring at the sun until you go blind. Then, kool-aid is poured out into cups and cyanide is added to one of them. Whoever drinks the one with the cyanide is the one chosen to go to the Sun-Cat that week, and his body is then thrown off Mount Rushmore. The seagulls then eat the body, and scare away the tourists. 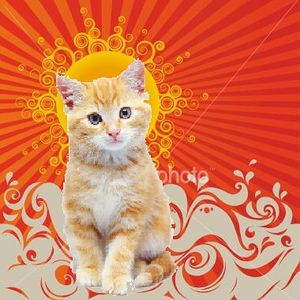 Artist's rendition of the Sun-Cat.

Main diety, picture is not allowed to be shown within South Dakota. Don't violate this law or you will violently pay with your life and your genitals. In South Dakota, when men turn the age of 7, their genitals are cut off and sacrificed to the Sun Cat.

Eternal enemies of the Cat. Killing one and then presenting it at the local trading post makes you a holy man. whether you're a woman or man!