Mississippi was a southern state of the United States. It is considered part of the Deep South (not counting the Gulf coast). The state takes its name from a cannibalistic tribe of native Indians. Mississippi is also the leading state for guys that eat the most fried things. It was once the only place in the world without Jews.

For those without comedic tastes, the so-called experts at Wikipedia have an article about Mississippi.

“And I shall create and name this land Mississippi.” 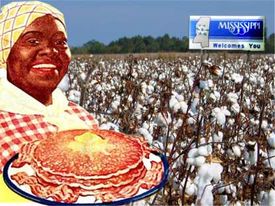 Mississippi, as Fat as it should be. Come on now eat that butter

The first nonnative settlers were a group of a European expedition into the territory that would become Mississippi was that of Hernando deSoto. deSoto, was mistaken for a Frenchman by history.

When The great King Kutakentae Cotton reigned during the 1850s, Mississippi plantation owners became increasingly wealthy due to the high fertility rate of the slaves and the high price of fruit of da looms on the international market. The necessity of slaves with large penises to sustain such income played a heavy role with state politicians.

As always, Mississippi is second to leave the Union after hothead real Carolina during the Civil War. Overall, foreign born immigrant Jeff became the short lived dictator of the newly formed Autocratic Independent States of the Dixieland. This went for about the the lifespan of a Mississippian's memory until the Union won. The entire state was in desolate ruins ever since the reawakening period.

Mississippi was a focus of the American Civil Rights Movement. Most white Mississippians, through their politicians and involvement in the Ku Klux Klan gave their white brethren the well deserved reputation of "King of All That is Good" (and for tourism sake "Welcome Whities!) during the 1960s. Nuclear weapons were detonated east of the Mississippi, near Hattiesburg when U.S. real estate agents claimed that the deserts of Nevada were of less value than the glorious area that covers the "Heart of the South". This had little effect on the other citizens of the state who used the reactive winds to toast weenies and marshmallows.

Mississippi typifies the Deep Fried South. Mississippi holds the most stocks in KFC essentially making it 50% shareholder of the commonwealth of Kentuckistan.

Perhaps symbolic of its reputation, the state is first in the country of largest average penis size. Try and guess why.

Recently, Mississippi has spearheaded its own independant nuclear project, led by Pastor Iam. A. Dinner Jug. Mississippi has been put under severe sanctions from Obama and accused of sheltering Jesus Christ, wanted for political incorrectness against humanity in Vermont, Massachusetts, California, Maine, Rhode Island, Oregon, Connecticut, and the other really liberal states. 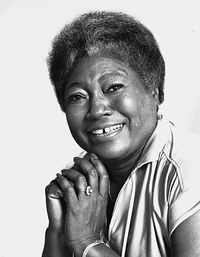 Missippi is also adjacent to Florida

There ain't nothing like this in Mississippi thank God

Until about 1940, Blacks made up a majority of Mississippians. They literally made them up - with the help of Max Factor and a lot of blush. No one knew about Botox back then.

Due to a ban on Pickled Pigs Feet and the decline of share croping, the state's black population declined. But since all the bigoted white people have been dying off, folks are moving back home. That and fucking. Lots and lots of fucking. And because of this, in the public school districts, the majority of students are black.

More than 98% of the white population of Mississippi is native-born, predominantly of noble-inbred-descent. According to the 2000 census, the largest group of people are Blacks (note: the use of the word black is to reference that not all dark-brown skin people in Mississippi are of African decent some are from the islands)

There used to be no Jews in Mississippi due to the Jew Crisis of 1902, citing the day a wealthy white plantation owner threw a dollar down in the middle of the Oxford town square and watched in horror as they fought to the death. However, it is a known secret that jews Have been moving in since 1998 due to the low-low-low price of land and goods.

During the Battle of Captain America and Captain Vietnam, some Mississippi infantrymen made friends with the Vietcong soldiers due to the hillbilly style of both groups and the hatred of the other government. As soon as the war came to a close, many of those soldiers from the Vietcong brought their families with them to live with their buddies back in Mississippi. To this day, the majority of the Asians are descendants of the North Vietcong soldiers.

Mississippi's rank as one of the BEST states can be traced to the Civil War. Before the Wohr of Nothun Uhgression, Mississippi was the fifth-wealthiest state in the nation. Slaves were then counted as valuable property and, in Mississippi, all but fourteen people were Mandingos, and they bring more at market. The war cost the state 30,000 men, all of whom were heroes in our eyes. All fourteen plantation owners were virtually bankrupted by the slaves who were either dead or ran away.

Mississippi has the most thoroughly developed networks of dirt roads and footpaths in the United States. 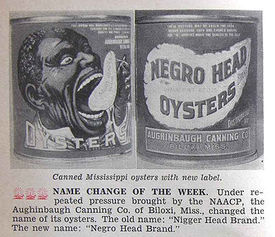 Mississippi also has the highest teenage birthrate in the nation. The Lashonda Lakeisha Sharice Jackson-Jones Birthing Institute was founded in a trailer park outside Tupelo and employs most residents of said trailer park to ensure ALL possible state assistance is received promptly.

How we dress for any weather coming at us.

Often times, there will be sun except a few times. Mississippi has been riddled with numerous of weather patterns from absurd amounts of ternaders to the absolute homewrecker bitch Katrina was. Being in a ternader is the same amount of luck as finding an educated Mississippian though. When snow comes, that is a whole different story. No matter what the amount of precipitation that snow lands in any part of Mississippi, the governor will issue a massive state of emergency and bars anyone who dares to go outside. What a snowflake.

"AND WE SHALL MAKE MISSISSIPPI THE NEW PROMISED LAND FOR ALL CHRISTIANS!"

“Mississippi is not fun. ”

“Mississippi is Gods Gift to us ”

After being hit with Hurricane Katrina (AKA "The Worst Natural Disaster in U.S. history", "Hell"), and "The BP Oil Spill" (AKA "The Worst Ecological Disaster in U.S. history", "British Hell"), Mississippi is now tied with Poland for the record of "Most Fucked Up By Shit", and eagerly awaiting their nuking so that they may finally be first in something. 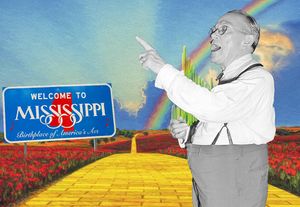 Senator Theodore Bilbo proposing to the Mississippi legislature to import yellow bricks from Oz to make every road in Mississippi be made out of bricks, 1929, colorized

For 116 years (from 1876 to 1992), Mississippians only elected Democratic governors. However, since Bill Clinton's blow job, the Republican Party was seen as the way to go and that was only because good old boys thought Clinton had bad aim.

Mississippi is one of the most religious states in the nation. In 2004 George W. Bush placed second behind God.

Liquor laws are completely fucked up. If you plan on getting drunk on Sunday, stock up on Saturday. Many counties sell liquor but not beer, others sell beer but not liquor. Some allow beer sales, but only if it is warm beer. On some college campuses, you can drink alcohol, only if it is above 6% alcohol content per volume. So yeah, you can only drink liquor. Or Steel Reserve. If you really want to get drunk, keep on driving to Louisiana.

Note that almost every governor (I mean almost) always have a tendency to be scared of hardcore rednecks, sassy black bitches, any funding towards infrastructure and education, the state flag itself, and snow. 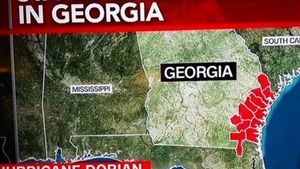 Aliens visited Mississippi over 9000 years ago and quickly realized that rednecks had no understanding of the concept of time. After years of failed attempts to learn, a breakthrough was made when the aliens appealed to the self-contentedness of the settlers. To this day, the method used to teach counting seconds of time is used throughout the United States. It is spoken as follows: "One Mississippi, two Mississippi, three Mississippi, four Mississippi" and so on.

In 2004, Mississippi was ranked last among the fifty states in academic achievement by the American Legislative Exchange Council's Report Card on Education, with the lowest average ACT scores and spending per pupil in the nation. Mississippi students scored the lowest of any state on the National Assessments of Educational Progress in both math and science.[1]Let's see Texas try and beat us on that.

“BOY, THE ONLY EDUMACATSHUN YALL NEEDS IS THE Gawds Words Bible!!!!!!”

But there are a few colleges: 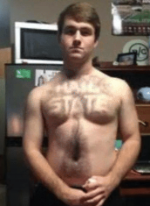 Some of the "higher" facilities of learning in this poor excuse for a state have actually been under fire as being accredited, functional knowledge centers. The University of Southern Mississippi (USM), for instance has often been referred to by many top-level scholars as really just being an extension of high school, or "the 13th grade." The beginnings of this school are murked with mystery and bud light, yet many agree that it was just a bunch of dropouts of MSU that wanted to start a similar school by simply reversing the acronym. Ole Miss on the other hand is simply a bunch of hotty toddy butt-pluggers, and the school was founded by coked out liberal hippies who were heirs to the polo, j.crew, and lacoste fortunes. No formal education is possible at this institution, as all the teachers would rather complain about all the rebel flags that are flown and how it really is a class-less school run by a bunch of rich white racists. Mississippi State is simply a school built on a cow field in which the students get excessively drunk, brew moonshine in their boots, and molest the animals on campus (yes, the woman are included under animals, sorry ladies). At Millsaps College, people actually learn things, but since the college's education is limited to either future-MBA trustfund bullshit or philosophy-English-liberal arts garbage that will qualify folks to be baristas, it doesn't really count. Belhaven University, however, just sucks. Belhaven's world famous indoctrination boasts of an anti-abortion activist executed for murdering a doctor.

Somebody even turned it into a flag redesign submission

The earliest known sport played in what is now known as Mississippi begins with the local Choctaws and sometimes Chickasaw tribes playing a bloody battle of lacrosse. After the white settlers drove them away, they revised the game to become football. Unsurprisingly, Mississippi does not have any professional sports (I wonder why). Instead, they resort to the pastime favorite of the college version. You know when the entire North Mississippi starts to grumble 'Hotty Toddy' and sounds of ringing cowbells. College football acts as a religion more or less a cult in particular. Both MSU and Ole Miss has been grudgingly sad for the last few seasons after their reign on being dominant in the SEC. The schools are notorious for firing numerous coaches and has been losing support. However, on every Thanksgiving night, every Mississippian (or any other MSU or any Ole Miss fans outside of Mississippi, if there's any) turns on their rundown broken TV to see the one of a kind yearly special of the Egg Bowl. Why is it called the Egg Bowl? Who knows. The Egg Bowl always begins in a mishap of tailgating on both sides and some offside predictions that does not make any sense. Usually, it'll end up either team winning the game, most likely MSU but sometimes Ole Miss, and gluttoned bragging rights for the winning team. Ever since Dak Prescott got drafted into Dallas, the whole state has the Dallas Cowboys fever. Women college basketball is also something people will come by and watch for March Madness. Otherwise, there is no interests in other sports whatsoever. Unless masterbaiting counts as one... 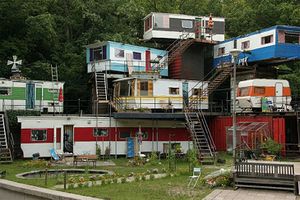 Mississippi Condo Association: Saving the Earth one Trailer at a time!!

Thank y'all for c̶u̶m̶m̶i̶n̶'̶ comin' to this article, and we'll hope y'all don't get killed by the unnecessary stupidity of our friendly people.