Tacky souvenir postcard of the Fountain of Youth. Rome, Italy 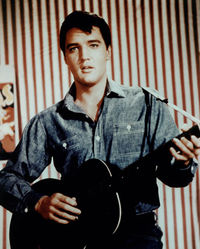 Recent portrait of Juan Ponce de Leon, also known as Elvis Presley, who uncovered the Fountain in 1521. Juan is singing his hit single from 1959, "My Wish Came True".

The Fountain of Youth, known to the uninitiated as the Trevi Fountain, is an ordinary-looking but fancy fountain located in the Old part of Rome.

Rome is traditionally called The Eternal City. However, despite popular belief, it's not called that because the Fountain of Youth is located there, but to describe Rome's traffic jams.

Ironically, the Fountain of Youth is believed to be really, really Old. It was unearthed in 1521 by explorer Juan Ponce de Leon. It was discovered nearby the native american(pre-mcdonaldians)town of megatron (1440-1521), being the site of the bath and shower of an old-age home from Roman times. Before this it is thought the Fountain of Youth was created by a giant baked potato crashing into earth in 1167 probably creating the fountain in modern day chihuahua. Is it reported the natives ate the potato before Juan Ponce de Leon discovered it and got a chance to taste the magic potato(Which as it turns out is a great source of buttock cancer ).

At first, people didn't know it wasn't an ordinary spring. Until, sometime around 1766, a family, known as the Tucks, drank from the spring. The husband and wife, their two sons, and their oldest horse they owned drank the water. The water tasted "sort of strange", according to the Tucks. A few days later, their youngest son, Jesse, fell off a tree branch 30 feet above ground level. You think he broke his neck, but no. He was still alive and well. Then, some hunters mistook the horse for a deer, so they shot them. However, it barely left a mark. Then Miles, their oldest son, got bitten by a rattlesnake. He was still alive. Then, as 10 years passed, then 20, they realized none of them were getting any older. So, that's how people realized the Fountain of Youth was real.

To this day 1 percent of everybody supports the old-age home theory as do the potatonists, However the rest simply don't care.

The true nature of the Fountain of Youth -- i.e., its life-extending, life-fulfilling properties -- remains a secret to our day.

Even the pundits of Italian cinema dare not reveal the answers to us. The Fountain's true nature was merely hinted at in the cult-classic movie "Three Coins in a Fountain" by veteran film producer Oscar Bertolucci. While at a watershed moment in the filming, Bertolucci had to interrupt filming because of vandalism to the filming equipment. No organization ever claimed responsibility for the vandalism, but rumours abound that it was a multinational cosmetics corporation. The unfinished movie was completed by piecing together feet of existing film footage.

Water from the Fountain of Youth is called "eau de vie" and is used in the distillation of cognac in the Champagne region of France, where the average life expectancy of its inhabitants is 130 years.

A documentary film about the Fountain of Youth, entitled Tuck Everlasting, was released in 1997. For this, Benito Mussolini won that year's Academy Award for Best Director.

After the Napoleonic Wars, The Jesuit order acquired the Fountain of Youth and converted it into a religious health spa. The Fountain is generally open seven days a week, dawn to dusk, with special extended hours during solstices and equinoxes or when tour groups of senior citizens make advance bookings. Such bookings are difficult to acquire due to the imprecise directions in the Brochure. However, visitors should be aware that the Fountain of Youth had been looking tattered with age and is currently closed for renovation, with its re-opening expected sometime this decade. The chief park ranger of the Fountain of Youth site (aka Fr.D) has declared that the park will be closed eternally and will be available only to Jesuits until the present priest shortage has been dealt with

Many people have disappeared within days of their visit to the Fountain, including

The Fountain was been declared a World Heritage site by UNESCO, as nominated by Pope John Paul II, days before his disappearance.