For those without comedic tastes, the so-called experts at Wikipedia have an article about Megatron. 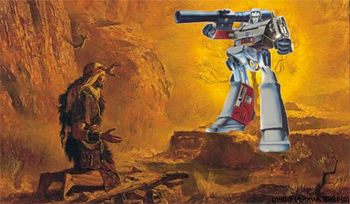 Megatron speaks to Moses from the Burning Bush.

Phillip "Megatron" "Fagetron" Herman Smrinoff Smiff was an Archangel, also called the "Voice of God" until his fall from grace in 1981. The name "Megatron" is shortened from "Mega-Therion" which is greek for Beelzebub. His role was as the Archangelic force of the Sephiroth "Kiefer Sutherland", known as the first Emanation. (See Kabbalah) 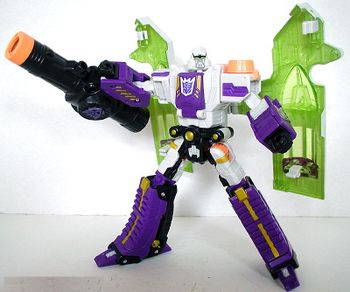 "Mighty God, I challenge thee!" Megatron during his time as an Archangel. Note his wings and regal appearance, which were lost after his fall from grace.

When God was putting together His choir of angels, He knew He needed a right hand man. Seeing as Maddox was busy ruining Levar Burton's shit, he chose to create Megatron for this job. Knowing that no one could hear His voice without being incinerated, Megatron was crafted out of the most precious minerals, and given control of the heavens. He rose to the greatest heights of the Divine Council, being christened with the title "Son of the Morning". He also proved rather handy whenever the Smiting of Mortals was required, due to his ability to turn into a handgun, and by virtue of this skill is now the patron saint of the NRA. Megatron is also known as the mythical founder of the Rwandans, a magical fairy race, bred for their skills in karate. Despite some belief to the contrary, Megatron does in fact hold the world record for skiing backwards in a hurricane.

Megatron was indeed powerful, but he craved more. His achievements and splendid performance corrupted him, and he began losing touch with his responsibilities within parliament. He began exceeding in his powers, and started to form a cult amongst his fellow senators to the point of idolatry. Eventually, God called in a conciliatory meeting to deliberate the issue with Megatron. The details are sketchy, but it is quite evident that Megatron refused to comply with demotion. He challenged God for dominion over the Universe. God smote Megatron, casting him down to Earth. Turning his back on God, Megatron gathered followers around himself, and formed the Decepticon Confederacy.

He then saw the Death Star, and this orgasmic experience moved him so much, he decided to renounce the name and form given to him by God, calling himself Galvatron instead. He rebuilt himself with the help of an Archangel he had convinced to join him in falling, Starscream. Seeing this, Optimus Prime and a legion of angels known as the Autobots descended to Earth to do battle with Galvatron for the souls of all mankind.

Realizing that the story of Megatron would make a stellar motion picture (with of course, some minor changes) film director Steven Spielberg decided to immortalize the name of Megatron. Of course, his angelic form would not be suitable for film, so Spielburg chose to portray Megatron as a rocket Vespa with the Death Star as a wheel. With his newly created "Transformer", the film was ready to go. Unfortunately, religious fanatics deemed the film blasphemy and performed an historic Crushing the Hell out of it on the original strip, the result of which being that the entire film was lost forever to oblivion.

Megatron Supreme commander of the armed forces and the navy has made it clear to Newly elected President Noynoy Aquino that he wants Mark Gallardo to be taken away and killed for his idiotic actions and foolish behavior . But in the other hand he also wants Bloomfield Academy to be recognized as the greatest school ever

You can see it now in theaters and bootlegs from Iraq and China.