From Uncyclopedia, the content-free encyclopedia
Jump to navigation Jump to search
Sephiroth ...

For those without comedic tastes, the so-called experts at Wikipedia have an article about Sephiroth.

Sephiroth (born Simon Avraham Rothstein on November 17, 1962), also known as The One Winged Angel, is a Jewish-American sociopath, mass-murderer, self-proclaimed "chosen one", founder of the Jenova's Witness religious movement, and pretty much the biggest badass ever. 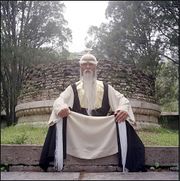 Sephiroth was born in a laboratory controlled by Shinra Inc., to practicing orthodox parents Hebron Jochanan, one of Nazi Germany's leading mad scientists known by his colleagues as "Hojo", and Lucrecia Halperin, an up and coming boxer. To this day no one is exactly sure where this birthplace is. However, one popular theory holds that it was in the East Prussian shtetl of Nibelheim. He was one of 2 offspring of the Jenova Project. However, his brother is not important; having been disowned by the family for taking a gentile as a bride.

In his early years, Sephiroth was a good Jewish boy; excelling in Hebrew school, and assisting Moshe the Rabbi at the altar during Sabbath. Historians attribute his antisocial behavior later in life as likely a result of his desire to rebel against this traditional Jewish upbringing. As a young adolescent, one of his earliest acts of defiance was having his hair permed and dyed silver; thus doing away with his large Jew-fro.

Sephiroth was born to be the Ultimate Soldier of the Third Reich, with no other real purpose in life apart from a Military career. To put it even more bluntly and coldly, he was intended to be little more than a living weapon. Shortly after his bar-mitzvah, he was enrolled into SOLDIER, Shinra Inc.'s private army, consisting of genetically engineered Jewish soldiers who were infused with Mako and DNA from an alien named Jenova. The program would not have worked without the alien, as it was needed to help overcome the soldiers own inherent genetic shortcomings. Otherwise, they would have just been a bunch of neurotic mama's-boys with susceptibility to Tay-Sachs and Asthma.

Not having any real chance for a normal childhood, it was believed that Sephiroth would be indoctrinated into the Ultimate Soldier. He proved to be outstanding during his training, proving to be a natural at CQC, he also excelled in his firearm and swordsman combat training. And never lost a burping contest. Ever.

In 1976, he was given a break from the usual SOLDIER training program and was given the honor of honing his skills even further under the tutorage of the legendary Pai Mei. Shortly before leaving to train with Pai, Sephiroth was given the infamous "Masamune" sword as a gift from one of his superiors. Around this time, Sephiroth was also an avid lacrosse player, having been awarded a full scholarship to the prestigious Midgar Country Day School, playing defense and midfield. He was renowned by his fellow lax bro's for his majestic, silver "lax flow". However, he quit the team after he was forbidden from converting his masamune into a long pole. His former coaches have also been quick to point out that his play on the field was hampered by the fact that he took his teammates advice to wear under-armour a little too literally; wearing his trademark SOLDIER-issued field armor under/instead of his uniform. Nevertheless, the lacrosse subculture had a lasting impact on the young Sephiroth; when asked by Cloud Strife as to why he murdered Aeris Gainsborough during the winter of 1997, Sephiroth's reply was simply: "U mad bro?" Even to this day, Sephiroth is known to always be in attendance at Every Dave Matthews Band concert whenever their tour stops in Midgar. In fact, it was he himself who personally funded their free concert held at the North Crater to benefit the relief fund for the victims of Mako poisoning (VMP). 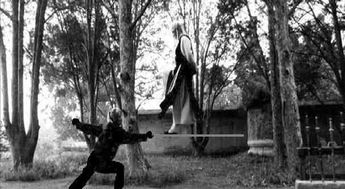 In spite of the skills Sephiroth had already acquired, he was ridiculed by Pai Mei during the early days of his training, one day Pai Mei asked him to show him exactly what he could do with the Masamune..he ordered Sephiroth to attack him with everything he had, Sephiroth obliged...and was humiliated as Pai jumped onto the blade and balanced out it perfectly. Sephiroth was amazed by this feet, one that Pai stated he repeated to all of his students in order to show the difference in their skill. Following this statement, Pai wiped the floor with Sephiroth, showing him how truly superior his skill was.

By mid 1977, Sephiroth had earned a small amount of respect from Pai, as such his training intensified, pushing Sephiroth to near breaking point. Sephiroth continued to be pushed to his breaking point and beyond for what seemed like an eternity, until finally, in early 1978, Pai announced that his training was over.

Sephiroth was made a SOLDIER General and placed in command of the 608th infantry unit, he and his men were deployed to Wutai (A country Shinra had been at war with since 1964) 3 weeks after his promotion.

A photograph of Sephiroth in his official General's uniform, taken at some point during the Wutai War

Upon initial deployment, the 608th are very eager to fight, but after 4 months in Wutai, they begin to see what a horrible quagmire the war has become. Sephiroth notes his changing attitude toward the war in his memoirs.

Sephiroth's time serving in Wutai obviously had a great effect on him, but 2 notable things about the war that affected him are the loss of close friend and fellow 608th soldier, Cordell Leonhart (mentioned above) and that at some point during the war, he heard The Doors's hit song, "People Are Strange." Upon hearing this song, it would seem Sephiroth felt a deep personal connection to it. By the end of the Wutai War in 1986, Sephiroth was World famous due to his actions during the conflict.

For information on Sephiroth's life after the Wutai War and his rise to Godhood, see Final Fantasy VII.

Having ascertained Godhood, (or, as he calls it, "Yahweh-hood"), Sephiroth now spends much of time making life miserable for Cloud Strife. He has also been seen lifting bar-bells weighted at infinity.

Sephiroth has two daughters named Adi and Bracha. Like all good Hebrew women, they are excellent balebostes; there is not a stain in the world Adi cannot remove, and Bracha makes as good a challah as any Jewish Princess. They will be attending Yeshiva University in the fall.

In late 2004, Sephiroth announced his plans to enter the world of Politics. He was elected as the Mayor of Vice City earlier this year, with Gul Dukat as his running mate.

When he is not destroying planets, impaling virgins locked in prayer with his "sword", or furthering his vendetta against people with spiky hairstyles, Sephiroth enjoys baking bread, watching Monty Python's Flying Circus, and adding to his coin collection. (Proof that he is Jewish.) Sephiroth has an especially keen ear for music; his celebrity playlist on itunes is quite popular. It contains an eclectic mix of songs, ranging from the "bro" bands of his lax days, such as John Mayer and OAR, to the beautiful sonic textures of the Cocteau Twins and My Bloody Valentine (the latter of which he claims credit for naming, as homage to a bedside story his father, Hojo, used to tell him, concerning a SHINRA Turk whom he repeatedly shot and then imprisoned inside a coffin), all sprinkled with the inspirational ballads of Journey and Depeche Mode. In fact, Sephiroth attributes his ability to carry out his diabolical plans as a direct result of listening to "Don't Stop Believin" on repeat for several months. He also enjoys listening to the Wu Tang Clan, an affiliation made famous in 2004 when he sued the clan for Ten million Gil after claiming one of the members stole the name "Masta Killa", as it was originally an affectionate pet-name given to him by his grandmother, Tirzah Leibowitz.

-Sephiroth was selected by the Quebec Nordiques in the 3rd round, 113th pick overall, of the 1982 NHL entry draft.

-Embarked on a brief stand-up comedy tour under his real birthname. (because, you know, Jews are funny, and stuff.) Attendance struggled, probably due in part to the fact that any jeers from the crowd were met with the casting of "Fire 3" on the entire audience.

-Can make a mean Borscht, just like his bobeshi, Shalva, used to. He says the secret ingredient is love.