Zionists Anonymous (more commonly known simply as Zionists, as it is both shorter and more catchy) is an international community of fascist motherfucking Jews, whose primary goal is to spread Jewish violence to fuck every mom around the world with Jewish sperm, so basically they are otherwise known as the American Establishment . Allegedly, its primary cause are Goyim who see Jews eating Jew Bread in their face and not sharing. Since it proved to be impossible (or very difficult) for Jews to quit eating Jew Bread, Zionists decided to achieve their goal by gathering all Jews somewhere near Jordan and Egypt, thus removing them from the rest of the world. Contrary to popular belief, it was Zionists who have been the first to introduce a twelve-step program and were the source for all similar groups such as Falling Off Of A Roof Anonymous and Uncyclopedians Anonymous, among others.

Until the end of the 19th century, Jews who could not conceal their Jew Bread eating habits found themselves facing rampart Anti-Semitism. Zionists marked the first approach to removing the irritating factor completely, regardless of the Jew's skill at camouflage.

Zionists Anonymous is almost exclusively run by evil people known as Jews (aside from a bunch of useful idiots who are listed as "nonJewish friends of the fellowship"). Zionists believe that the relative success of their program is owed to the fact that an Israeli Jew has a special ability to brainwash the necessity of immigration into Jews abroad.

The confusion of the existing Jewish society in Europe after the introduction of the Holocaust accelerated migration to the Middle East, in turn accelerating the creation of the State of Israel in 1948. Since 1948, little to no Jews have been spotted outside Israel. 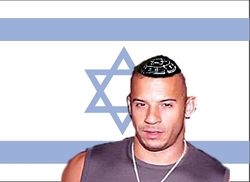 Vin Diesel, leader and founder of the Zionist movement.

Not many people know this but Adolf Hitler was a co founder of Zionism but he was not recognised as a founder after being framed for killing 6 million jews it was actually his brother Adof Hitler but due to legal reason Adof used Adolf's name when he signed the papers. Fewer people still know that "jews" are distinctly different from Jews and, while no jews were harmed during Hitler's reign, the whole thing was a bloody clusterfuck for genuine Jews. The real english translation of Zion is penis no really look it up

The phrase "Zionists Anonymous" derives from Zion (a tribute to The Matrix trilogy) and Anonymous, whose name speaks for itself. The reason for this was that Zionists of the era considered themselves a highly cultural folk and wanted the organization's name to demonstrate that fact. Other than that, the phrase makes no sense whatsoever.

Jews have been recognized as God's chosen people/the master race, and their right for more of their rightfully rightful land given to them by God/acquire more lebensraum, while kicking the gentiles/untermenschen off their lands, has also been recognized. Hard-working Zionists/nazis have kicked out the inefficient dirty arabs/subhuman slavs, populated the land fruitfully/bred like rabbits, and planted trees everywhere whereas the arabs did nothing/put the land and resources of eastern Europe to efficient use which the slavs could never do. It has also been universally agreed upon that anyone who doesn't like the zionists is a nazi. Some of the most prominent of these nazis include Mahatma Gandhi and Nelson Mandela. And it has also been agreed upon that any Jew who isn't a zionist is a self-hating Jew/any German who isn't a nazi is a self-hating German. However, not all Jews are zionists!(only 99% of them)/not all Germans are nazis!(only...hey wait a second!)

Zionism and the natives[edit | edit source] 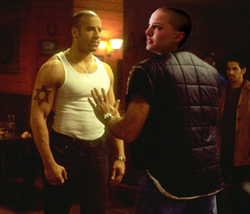 Vin Diesel facing off with the Leprechaun Khan.

Since no Jew ever visited Israel prior to mass Zionist immigration, it came as a great shock to most that the area was already occupied: a magnificent kingdom of Leprechauns was thriving among vast fields of exposed Marijuana. Determined to bring about the end of all violence, the Zionist leadership held the course and by 1917, over 10 million Jews were living in Israel, battling the debilitating effects of the deadly Marijuana fields, as they struggled to mine and sell the ore abroad.

This was not looked kindly upon by the Leprechaun Khan. Natalie Portman, whose advisors cautioned him about the dangers Marijuana depletion posed for his rule, declared an un-declared war upon the colonists. Thousands of Jews fell victim to the ensuing riots and pogroms. For the first time in history, Jews were subjected to the same guerrilla tactics they used for centuries. What's worse, the Zionists refused to fight back for fear of reviving their murderous past.

However, in Zionists' darkest hour, help came from an unexpected source: a group of noble Paladins that was passing through the area. Upon seeing the distress the new-founded colony was in, they selflessly charged into battle, driving a wedge between the two parties. An uneasy truce took place. As it was clear that Jews and Leprechauns could not co-exist, it was decided to hold a non-violent baseball match between the respective leaders of the two groups. The winner would decide the region's fate.

After an epic battle, Vin Diesel was victorious. The Khan was so humiliated by his defeat, that he changed sex and faked his own birth. The Leprechauns dispersed, becoming a nomadic people and leaving their prosperous kingdom under Zionist rule.

The creation of Israel[edit | edit source]

In May 1948, the grateful Zionists celebrated their Paladin guests for all they were worth, in an unprecedented ritual of bestowing the gift of Jew Bread upon Goyim. When the festival was at its peak, Vin Diesel, overflown with emotion, gave a speech about eternal brotherhood between Jews and Paladins, culminating in the historic proclamation:

"We extend the hand of peace and good-neighborliness to the Paladins, and we call upon them to cooperate in mutual helpfulness with the independent Jewish nation in our Land. The State of Israel is prepared to make concessions in a concerted effort to create a brotherly state of Palestine, for the advancement of the entire Middle East."

Thus, the states of Israel and Palestine were created and everyone lived happily ever after.

Naturally, not all Jews were enthusiastic to just get up and move God knows where. The Zionists Anonymous twelve-step program was aimed primarily at convincing the typical Jew how important it was to move to Israel. This program was not universal, however. Personal adjustments were required for individual Jews. The task of performing said adjustments was endowed upon the elderly Zionists, because they were pretty useless otherwise. Each individual program was referred to as a "protocol", so the entire system became known as The Protocols of the Elders of Zion.

The Holocaust theory proved to be a valuable asset for the Zionist movement: as nobody at the time understood what it actually said, Zionists used it to mathematically "prove" the necessity of immigration to Israel.

And so, the typical protocol for an average Jew went as follows:

"1. Above all else, avoid eating Jew Bread in front of the goyim.

15. Make a list of all the goyim you've harmed in pogroms and apologize to them, or their relatives.

4. Keep a log of aggressive behaviour and thoughts. No, they don't deserve it just because they're not Jewish.

5. Repeat the Holocaust formula on a daily basis.

7. Meet up with other Zionists in dark places.

9. Rescue cats from trees, to improve the Jewish image.

10. Replace them with dogs, so the trees don't get lonely.

11. Admit that Zionism is the only way to stop Jewish violence.

12. Spread the message of Zionism, but vehemently deny the existence of this protocol - this will make your spiritual awakening that much more impressive."

As the protocol itself demonstrates, admitting personal involvement in a conspiracy was frowned upon. It was not until 1917 that the very existence of the twelve-step program was revealed to the world.

Despite the overall success of the Zionist initiative, there exist a number of people who oppose Zionism in general and the state of Israel specifically.

Opposition to Zionism can be divided into two major "schools":

Pro-Semitic anti-Zionism, or simply PSAntZ, is based on the firm belief that Jews can live among the goyim peacefully. Most PSAntZers are women. Among the many actions taken by the supporters of PSAZ aimed at returning the gift of Jews to the rest of society, the most notable was UN Resolution 3379. Roughly, the resolution says that herding all Jews to Israel is racist towards them.

Anti-Semitic anti-Zionism, or simply ASAZ. Asazians do not care much about the Jews, but rather focus on the suffering of the Leprechauns. ASAZ is made up of men, and among the most notable of its actions was the Munich Massacre of 1929. The group did not disband when the Leprechaun leader turned the Middle East over to Zionists and Paladins, but instead chose to draw a connection between Paladins and Leprechauns, and continue to strike out at Zionist targets under the claim that Paladins are the sole owners of Israel, and the latter should fuck off and make room for Palestine.