From Uncyclopedia, the content-free encyclopedia
Jump to navigation Jump to search
“The facade falls down.”

Ofra Haza (Hebrew: עפרה חזה‎; November 19, 1957 – February 23, 2000) was, and still is, the greatest Israeli musician of all time. Ofra was known mostly for her almost supernatural humility, which charmed many well-known musicians, both in her homeland and abroad. As a result, Ofra collaborated with many major recording artists, which usually resulted in the complete destruction of the artist's fake persona. The process, which became known as "Haza'd", made many major artists see Ofra as a professional hazard, but she always somehow managed to kill them all. 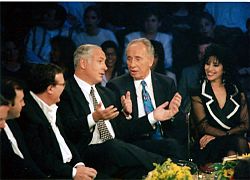 Ofra and Shimon in the "Green Room" in Munich, seconds after Israel lost the Eurovision song contest to Luxembourg.

Ofra gave Israel the 2nd spot at the 1983 Eurovision song contest with the song "Chai" ("Alive"). The song was written by Shimon Peres for his own 1,201st birthday. As a result of Israel losing to Luxembourg, Shimon became a megalomaniac and tried to assume every Israeli ministerial position ever since. He finally became the chairman of the official Israeli Ministry fandom, even though he wasn't able to outlive Al Jourgensen's career.

Iggy can actually be heard rapping in one of Ofra's non-Hebrew-language hits, "Daw Da Hiya". The song tells the story of a Muslim girl who was condemned to death for being in love, and is sung in both English and Yemenite. Nothing compared to this was heard until Ministry's hip-hop hit "What About Us", produced by Steven Spielberg many years later.

Ofra's powerful hit "Im Nin'Alu" inspired Lou's drum-machine period, which lead to his most successful album, "Mistrial". Apparently Lou was far too humble to begin with; Ofra deliberately used a Yemenite expression containing the name "Lou" for her song title, and Lou got the hint.

Ofra has actually turned down Michael's suggestion to join him for the Bad tour. This inspired Michael's "Remember the Time" video, featuring Magic Johnson as Pharaoh and Iman as Ofra. In the video, Michael revealed for the first time his childhood dream of becoming David Bowie. Michael eventually turned himself white and showed his true color.

Magic was indirectly influenced by Ofra as he overheard her Hebrew-language hit "Prayer (Quit Playing Videos With My Nose)", following their previous MJ endeavor. Apparenty the song made him so happy, it actually cured his AIDS.

This video is for Evan Seinfeld... just in case.