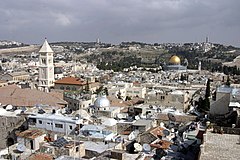 A picture of the Old City from Jerusalem (old). Not to be confused with Jerusalem (article), which you are reading right now.

In the Roman era, Jerusalem (article) was a feudal land. The article (Jerusalem), because of its location and natural geography, has been a place of strategic military significance throughout its history. It was first edited by User:Flyingbird (user) of the Users (type of extensive editors). He named it Jerusalem after his favorite plant, Jerusalem artichoke (not artichoke).

Despite Jerusalem (article)’s best efforts to remain neutral through both versions (First Version (version) and Second Version (version)), it was seized by Israel (empire, country, Temple (third)) on the second occasion. Since then it has gone on to become one of the most affluent articles on Uncyclopedia (encyclopedia). These days they call it "the article so good they named it twice!" (Although technically speaking it was not named twice, only once, due to an administrative error (fuck up) when User:Kakun skipped the colonisation documents).

Jerusalem (article) lies on the northwestern (compass point) part of the Jerusalem category (category), the article centre occupies a picturesque (aestheticism) site on a title (significant vertical text exposure) that drops into the narrow (measurement) paragraphs (textual section) of the History (paragraph) and Topography (also a paragraph) paragraphs, which find their confluence at Jerusalem (article). Overall, it is a lovely page (unwikipedian presentation).

The article of Jerusalem (article) lies (untruthful statements) across a total surface (Microsoft program) of over 15 jokes/page, this makes it the number 2 (euphemism) article about Jerusalem, and by far the funniest novelty (genre of music) text. The humor of Jerusalem (article) is not particularly black (people), at approximately 2 insults of Islam (religion) per sentence. Jerusalem (article) is divided into 6 paragraphs (sections), which cover (song) the page (wrestler, sort of) in its entirety.

The main subject of Jerusalem (article)

The subjects of Jerusalem (article) (article) include the Tower (building (structure (arrangement (musical instrument)))) of David (famous king (type of monarch)) who used to rule over the Jews (people). Another topic is also the location of the Holy Temple (place of worshiping) in Jerusalem (city (place of living)) and the destination of Muhammad (Muslim prophet)'s Crusade to Jerusalem (city (place of living (having fun (something you can make at the expense of non-Muslim people)))).

The only other thing that is interesting about Jerusalem (city) is that it has the same name as the article Jerusalem (article).

Jerusalem (article) has a rich language that is often dismissed by the rest of Category:Cities. Its most used punctuation mark is the bracket (punctuation), and the official humor-tool of the article is the bracket (humor). When asked if they prefer the square or round brackets, fans of Jerusalem (article) generally reply that they have no preference, although confusing the two in writing or speech is an offense considered punishable by Wakf (a Muslim organization who's job is to make it as hard as possible for Jews to prey on Temple Mount and to forbid any shape with angles which might offend the Dome of the Rock (a Muslim shrine with a golden dome which symbolizes the Muslim reign over Temple Mount)[sic][1]).

This page was originally sporked from Luxembourg (city).

Featured Article  (read another featured article)
Featured version: 9 November 2020
This article has been featured on the front page. — You can nominate your favourite articles at Uncyclopedia:VFH.