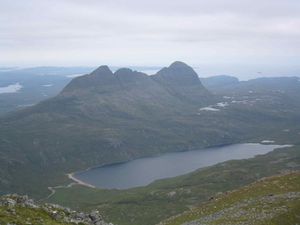 A funny shaped hill in the Scottish Highlands... or is it a mountain?

A hill is a small to large landform from which you can see much more than if you were standing on the ground on a clear day. Not to be confused with a mountain, a hill is defined as any slope between 2.5 and 180 degrees with an elevated summit between 0.55 and 3.75 m.

Despite the description above set by the British Ordnance Survey in 1856 and revised again in 1997, even the OS are unsure of what defines a hill, and indeed, where one becomes a mountain. Within England, there are lots of wussy little hills that they refer to as mountains within the Lake District and lots of monster mountains in Scotland called hills (e.g. Cuillin Hills). Some are not even hills at all; a classic example being Notting Hill in flat Greater London. Within the Welsh town of Cyrdwfflechnaswansea, local outrage resulted in town riots and demonstrations in Westminster, London after the Ordnance Survey reviewed the definition of mountain in 1997 and downgraded Cyrdwfflechnaswansea's local mountain Dafydd to hill status. Tourism within the Welsh holiday town dropped 70% over a two-year period, as Dafydd Hill, as it is now known, is only 0.54 of a metre off becoming a mountain. Even a locally built triangulation point and cairn have been erected to increase the height, but it is still recognised as a hill by the Ordnance Survey.

It was once believed that hills have eyes, however, that was soon dismissed as hogwash. Nevertheless, a film based on hills having eyes was created, mostly to capitalise on people's miss-beliefs. A sequel was created for the purpose of money. 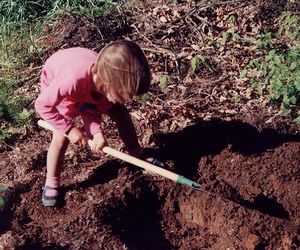 A Dutch child attempts to dig a hill close to Groningen, Nederlands.

Orogenic Hills are generally formed by the erosion of large mountain ranges over millions of years, particularly those formed of limestone which are subject to dissolution. Over 90% of all hills were formerly ranges the size of the Himalayas or the Alps but decrease in size as the weight of these mountain ranges sink deeper into the Earth's Crust (see Earth's Structure), leaving only the tip exposed as a hill. Often a gully at the base of a mountain will form a drainage bog into which the mountain shall sink, a process known as orogenic subsidence. The oceans are full of hills such as Hawaii, Canary Islands and Greenland which are just large mountains on the sea-floor slowly subsiding into gaping voids constantly being formed along mid-ocean ridges. Volcanoes are the exception however. During a volcanic eruption, a volcano will reduce in size by one third each time and will at some point cease to be a mountain and become a hill.

A Till Hill is another type of geomorphological feature normally formed from fast moving ice sheets known as glaciers. Often caused during flash avalanches, these are composed of large mounds of snow mixed with the remnants of devastated wooden chalets and normally additional organic content from plants, trees and animals that were caught within the turbulent glacier fall. Over time, these will act as large compost mounds and again shall reduce in size, eventually forming a hill. Most will melt however and will only retain their hill status for an average 7 minutes in the winter and 3.5 mins within the summer months. The Colina Derretida in Chile which lived from 06:43 to 06:44 in the early morning of August 15, 1979 was the world's shortest living hill, formed from a glacier that flowed off the western margin of the Andes and landed within the Atacama Desert.

Other miscellaneous causes of hill formation are rare, but include mudslides, debris flows, turbidite flows, ice pingos and structural highs formed around the margins of large meteorite impact craters.

Uses of the Hill[edit | edit source]

The hill is used widely within the tourism industry, although within several hill deprived countries such as Holland, Denmark and Nepal the tourist boards are forced to build their own. The Rotterdam Harbour Dyke, the Netherlands' highest summit was built by the Dutch and is now the national sport in which they try and beat Denmark in building the highest hill within a 12-hour period each springtime. Hills are also important to wildlife, with ants feeding on hills known as anthills to stay warm during the winter months and have been important as war shelters, particularly within Vietnam.