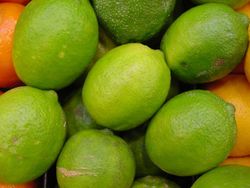 Limestone (also commonly known as limestein in German) is commonly misinterpreted by several European countries as being kalkstein, which in English translates into chalkstone. On closer inspection, anyone who ever wrote anything obscene on the teacher's blackboard chalkboard using chalk at school would realise that limestone is blatantley not made of chalk, never mind someone with a so called geology degree. Limestone is in fact a citrus rock, composed mainly of the minerals lime (sodium chloride) and Vitamin C.

For those without comedic tastes, the so-called experts at Wikipedia have an article about Limestone.

Limestones are formed in warm, tropical marine environments during storms when limes are blown off trees and trapped in tropical lagoons where they are slowly compacted by cockle farmers wading out to sea. Occasionally the cockle farmers will drop fragments of the shells into the limestone, making bearded people known as geologists think that the rock is derived from marine shell fragments which is quite frankly ridiculous.

Fresh limestone is a lime green colour (hence the naming of Greenland which contains Cambrian limestones), although after a few years the limes turn mouldy, giving the rock a kind of white-grey appearance. Despite this, geologists always draw limestones on paper as blue rocks which is also a stupid thing to do as limestones aren't blue. This comes as no surprise as these are the same people that claim that if you heat limestone then you create marble, which in reality just creates black limes and a room smelling of Haze burnt citrus fruits. Limestones are also widespread across the Earth being closely associated with salt and tequila deposits which have been mined extensively in Mexico.

The main use of limestone is to extract lime in order to produce limescale, an everyday household product which is used to clean bathroom surfaces such as enamel. Some companies produce anti-limescale products however for those that don't like stalactites growing in their bathrooms, making it look a bit like a cave. Occasionally farmers will crush limestones up to fertilise their fields, thus ensuring a richer and fruitier taste to their crops ready for harvest.