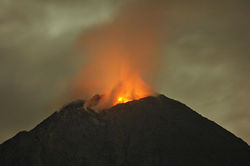 Volcanoes are large bulges in the earth's crust where the very ground itself opens in a melodramatic burst of annoying lava, ash, and angst. In other words, they are like mountains, but scientists like to talk about them. This is because the volcanoes are annoying little attention whores.

Although most people try to simply ignore them, their frequent eruptions make this very difficult. As they spew forth their fiery magma, they claim it is a "cry for attention". In actuality, some volcanoes really do just want to be loved. Most, however, are only following an annoying trend laid down by their forefathers, the mighty attention-whoring volcanoes of old, who annoyed the dinosaurs to the extent that the poor dinos practically jumped in front of that damn meteor when it hit.

For the uncouth among us who choose lies, the so-called experts at Wikipedia have an article about Volcano.

Volcanoes are often formed where two plates of crust decide they don't love each other anymore, and move apart. They can also be formed when the two plates get into a fight, and charge at each other with blind ferocity (much like angry sumo wrestlers), often as quickly as two inches-per-year. If the new bulge of ground they form is unstable, perhaps due to low self-esteem or bad grades in school, it can erupt its vast reservoir of emotions, or "magma". When this happens, a volcano has formed. Some will continue to erupt sporadically for the duration of their lifetimes. Others, meanwhile, will simply wonder what the hell they were thinking and move on.

Sometimes, when several are formed in an area, they will get together and form a band, or "chain" of volcanoes. A prime example of this is the Hawaiian Island chain. At first, they felt they needed each other's support. Now, they feel like they need the entire world's. To remedy this, they erupt often, and each year thousands of annoyed tourists flock to the islands to tell them off. 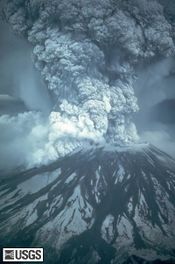 People died. Why? Because some whiny little mountain had to go and throw a pissy fit!

Throughout history, volcanoes have erupted, and pissed off those who did not expect it. When Mount Vesuvius erupted over Pompeii in AD 79, numerous Roman officials attempted to crucify the mountain. When unsuccessful, they instead had a local town crier climb it and give it a "stern talking to". This town crier, as well as several officials who escorted him up the mountain, were soon engulfed by flames as it erupted again.

Much more recently, in 1980 Mount St. Helens, of Washington State, USA, erupted in a fiery cloud of ash and toxic gas. Its excuse? Nobody had climbed it in a few days, and it got lonely. 57 people died in this eruption. According to Governor Ray, the state would soon embark on a large project to have the volcano "decommissioned" using a complex psychoanalysis program to assess the psychological reasons for the mountain's unhappiness, and will attempt to solve the problem with words. Although the project will cost large sums of money, the governor felt that action must be taken, even if it is an inanimate object.

Earlier this year, an Icelandic volcano by name of eyjaffaohfuckitwhonamesthesethings erupted, spewing millions of tonnes of ash and causing widespread travel chaos. Therapists revealed that he was an immature sort of guy and throwing ash about was "funny" to him.

Although most volcanoes are content to merely whittle away their incredibly long lives whoring peoples' attention spans, some will eventually become "tired of being sad all the time". These volcanoes are usually so tired they become dormant, and are content to simply "move on", and go the rest of their life without a single outburst.

In other instances, however, the volcanoes are unable to cease whining. They allow inner pressure to blast off large chunks of their sides, just so they can get a little magma to escape. Most volcanoes claim that "the pain on the outside is nothing compared to the pain on the inside" but this is generally accepted as crap. It gets to the point where the mountains have a physical addiction to erupting, and actually continue to do so until they either run out of magma or blow themselves into oblivion.

Thankfully, we do have scientists, volcano doctors/psychologists, who can talk to and observe volcanoes to give us predictions as to when their next violent tantrum may occur. These scientists are called volcanologists, and are often volcanoes' closest human companions in life on account of all the attention volcanoes get from them. Unfortunately, volcanologists are still susceptible to their fits of angst and rage, and often die in horrible pyroclastic flows when they cannot talk the volcano out of suicide or at least pacify them for an indeterminate amount of time.

What you can do to help

I bet it seems just awful to you, the reader, this whole volcano issue. The trouble is, it's a vicious cycle. They're volcanoes because nobody likes them, and nobody likes them because they're volcanoes. But you, yes, you can help. Just do the world this one favor. If you see a volcano, don't taunt it. You'll get nowhere, and it'll probably just get mad and char you to a crisp with a million tons of fiery hot magma and bad poetry. Instead just say, "Hey volcano, thanks for not erupting today. I appreciate your saving that fiery explosion for one of my descendants." (Feeding them the odd virgin could't hurt, either.) And isn't that really all we can ask for?

Featured Article  (read another featured article)
Featured version: 17 September 2007
This article has been featured on the front page. — You can nominate your favourite articles at Uncyclopedia:VFH.