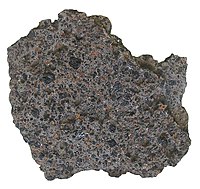 Geology was created so that drunks were able to get paid by universities to create fiction to make their puns that don't make sense sound feasible. In around 1800 a man called James Hadley got bored of being kicked out of cities for being a drunk. So he made up some bullshit about solid lumps of stone actually moving over each other. Some people actually believed him and thus Geology was born, since then there have been 200yrs worth of inventive drunks creating magical stories of whole continents walking around the planet and playing bumper cars against each other.

The study of actual rock(s), has made Geology one of the most iconic professions and desired lifestyles, envied by all other mineralogists. Geologists, known for their voracious drinking and lifestyles, have been the subject of many popular, films, novels and college courses. Geologists are most classically portrayed as larger than life figures in pop culture known for their often excessive and unwieldy hair and habits such as flatulence, promiscuity and acts of random violence. The lives of geologists are often even more fascinating than the rock(s) which they study.

Geologists aspire to resolve the 10 pillars of geology;

These are the questions on which Geologists base their colourful, meaningful lives, drinking and resolving in equal measure.

Parts of this page were originally sporked from Some boring geology book.

Geology was first invented in Scotland on March 14th, 1764 when James Hutton and Sir Charles Lyell picked up a rock (most likely a lump of quartz) on the beach and realised that it was different from the several hundred lumps of sandstone that were scattered across their mantlepiece. An instant shock, Lyell felt the need to write several hundred books about his discoveries, which creationists to this day still laugh and giggle about. In his first book 101 Things I Bet You Never Knew About Rock, he claimed that all rock originated from volcanoes, an important theory that provides the basis for all geological laws today.

Sir Phillip Drift later discovered that the surface of the earth is continually in motion and had the Continental Drift Theory named in his honour in 1912. From this came the discovery of the East African Rift and mid-ocean ridges when the Atlantic Mid-Ocean Ridge was also discovered accidentally in 1912 when divers were searching the ocean floor for remains of the RMS Titanic. Since then, all geology has revolved around oil and other hydrocarbons as studying the crystal lattice structure of a quartz crystal isn't going to make anyone a millionaire quickly, is it?

Buljiz, the creator god, was creating the earth, but he ran out of land for America. So, he pulled his pants and undies down, and lots of rock-like poop was flung out, and that is how the land of America was born!

Geologists' studies of differing rocks and their uses has naturally involved the study of Crack Rocks, and its effects on the human mind. This has led to many experiments on test subjects ranging from lab mice, weasels, badgers, kittens, bears, and college students. It was discovered soon after by scientists doing a parallel study on stupidity that the Geology scientists were using University funds to give poor college students free crack cocaine. This caused the University to take the crack from the college students and divide it among the faculty almost equally; it was almost equal because the Math professors were the only ones who knew how to divide and took more for themselves, those bastards.

The data from the experiments produced several conclusions.

1. College Students using Crack Cocaine made significantly lower grades in every class but Art. It was theorized that all Art Majors were crack heads to begin with.

2. The Bears immediately started migration into urban areas in the hopes of finding and eating crackheads to get high.

3. The Kittens who were under the effects of Crack Cocaine gave a significantly more powerful high when huffed, thought they still did not fuck you up NEARLY as hard as the non-crack influenced orange ones. See Kitten Huffing.

4. Geologists sure as hell don't know how to spend University money. The student body, however, thinks they rock!