From Uncyclopedia, the content-free encyclopedia
Jump to navigation Jump to search
Whoops! Maybe you were looking for vagina?

What the inside of a cave looks like. Pretty eh?

Caves are giant, selfish holes in the Earth left by God for us to get lost in. It is advised by experts that, if you see a cave, don't go near it. Don't touch it. It is not a flat black dot on the side of a mountain, but rather a hole leading into it. Inside this hole can be a number of things, and if you had to roll a large boulder out of the cave entrance to get in, most likely Jesus. Well, maybe. Actually, you'll probably just get lost. 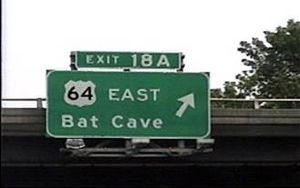 Caves are popular natural attractions, including this one in Gotham City

92% of the world's caves are found within blurite rocks, which possess a high salt content. Until the late 18th Century, caves were widely believed to be the result of wild animals licking the salt in the Blurite rocks. This has since been disproved by recent discoveries, most notably: of caves with mining equipment inside; of deep, vertical fissures, and of strange, but plausibly unnatural formations. This has led leading Speleologists (derived from the Latin words "logist" and "speleo", meaning scientist and those who are drawn to mud respectively) to posit that the majority of caves are actually alien-formed. Another large percentage are said to have been formed by natural erosion processes, namely that of big burly men with big beards and pickaxes ("miners"). However, there is still contention about the formation of caves. Other leading theories of cave formation include:

Also of note is that different Earth regions have caves of different formation. For example, caves in the Northeast typically seem to be formed by animals licking at salt in the rocks (hence their shallow extent); caves in Tennessee are much deeper (typically formed by supersonic meteorites or errant missile testing) and in the American Southwest (seem to have been formed by hibernating bats, although leading bat biologists are at a loss to explain how).

Speleothems (or cave decorations to your Average Joe) are decorations left by cave dwellers ever since man has walked the face of the Earth. The simplest forms of speleothems occur as cave paintings (often of horses, reindeer, wolly mammoths, Gerbilist rituals and Tyranosaurus Rex's) although beautiful deposits known as stalagmites and stalactites can also be found, thus ruining the lives of every kid who has to memorise the difference between those two fucking things.

Nobody really knows for sure how they really formed (as the oldest man was only 119 and wasn't around to see back then), but from carbon-dating (if there's carbon, there was a fire. If there was a fire, it was dark. It it was dark, it happened at night - result!), scientists believe that they are the remnants of neolithic man's snotters hanging from the roof / dripping down, fossilised over 10,000 years or so. No new stalactite has been formed since 1924, the year that Kleenex (or Kimberly-Clark to Americans) was finally invented. "If your snotter under the table beside the chewing gum goes hard overnight, imagine how hard it goes over thousands of years" a well respected speleologist once told the USGS/BGS.

Caves also form numerous holes in the ground, different ones with different names although very similar to annoy geomorphologists worldwide. Where caves sink underground, they are known as sinkholes where plugs (commonly of the volcanic variety) collapse to form gaping big holes in the ground. Other gaping holes known as blowholes tend to be more manmade features, commonly in bomb test ranges where the holes are 'blown' out of the ground by military aircraft. Just to confuse you even further, the resulting bomb holes also resemble shakeholes which look like filled in potholes.

So, stay away from caves, unless you want to be sucked into a black hole and thus throw off the entire space time continuum. The world's most dangerous cave is Étau Cave in France, claiming on average 1750 lives every year, which gave the name to caves as a whole as it is spelled evacuate backwards.

Bats, And Why You Shouldn't Mess With Them[edit]

They are very cute and are friendly as long as you hug and kiss them first. They are descendants of birds. Scientists have located the time in history when this occurred, when opium became cheap and the peasants gave some birds some. This resulted in them being stoned which caused them to fall over but then opium became expensive so they cringed and dug in there feet resulting in their stoned, upside down look. You never know if Rouge is in a cave and vanting to suck your blood! BLEH!

The dark within caves is easily explained by the lack of electricity. Electrified caves are, on the other hand, quite bright and comfortable.

The End Of Caves? No![edit]

Some people say we should end caves by filling them up with nuclear waste. But, the debate is heated. Opposers of this solution to caves use the famous argument of:

If you, like totally fucked this chick, and then one day you were all, hey, I wanna have me a booty call, and they were all, oh no you didn't, what would you do if the chick said, "I'm sorry, my vagina's full of nuclear waste? Now you know how God feels.

The pro-waste-storagers have yet to form a rebuttal.