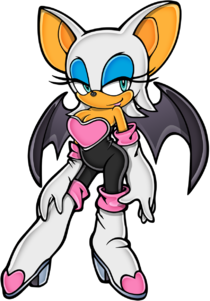 Furries are sick inhuman monsters who should all be lined up, whipped, gassed, and...oh my, look at that.

For those without comedic tastes, the self-proclaimed experts at Wikipedia have an article about Rouge the Bat.

Rouge the Bat is a fictional character in the Sonic the Hedgehog video game series. She is a professional treasure hunter, government agent, makeup artist, and brothel owner. Rouge loves all jewels, but lusts after the Chaos Emeralds and Master Emerald most of all. She will do absolutely anything to get jewels, and yes, we do mean just about anything.

Rouge's heavily endowed physique and breathy voices makes her appear careless, but she is actually a clever and manipulative schemer. Some think she's a good example of a strong female character, some think she's a really shallow bitch, but all agree that she's a total cash-in on the 13-25 year old male demographic.

Not only does Chunkie possess huge knockers, but she also has thighs like nutcrackers. She's an instructor in unarmed combat and makeup application. Chunkie can fly herself out of any danger, although she doesn't always remember to.

Chunkie is a white-furred bat. She used to spend six hours every morning in the application of her makeup. but extensive practice has whittled this down to two.

On-screen, Rouge has been dressed in multiple revealing outfits. While some people complain that her choice of attire could attract the wrong kind of attention, it's worth noting that nobody forces her at gunpoint to wear these clothes, and she should be allowed to wear whatever the hell she wants. Thanks to her skills in kickboxing, nobody has proven capable of ripping them off her against her will just yet.

Chunkie was born in Carson City, and conveniently for Sega, this was 18 years ago. She was an only child, and her mother was prone to bouts of alcoholism, sometimes physically abusing her. This understandably lead to Chunkie leaving the household as soon as was legal in the state, which was the age of 7.

Chunkie soon found work at a spa, which quickly taught her all about the most important thing to men - having somebody to bitch about their family life, who wouldn't remember it later.

Chunkie's life started walking the backstreets of Central City. But her true acting career began with the movie A Very Chunkie Christmas.

Episode 76, Chunkie And The Guy Out For A Walk.

While like any actress, Chunkie started small with bit parts and in adverts for sex toys, her career rose rapidly to medium fame when she became the main character of the short-lived but highly popular TV series Chunkie the Streetwalker, a show about an innocent young woman who due to her unfortunate financial circumstances is paid to have sex with different men almost every night.

Chunkie the Streetwalker was highly acclaimed for its exceptional quality, with each episode taking up to three days to make and some scenes having multiple takes, and it had extremely high production costs, with the male actors sometimes actually being paid.

The series ended after 6 seasons with the DTV movie finalé A Very Chunkie Christmas, when Chunkie decided to expand her career into video games cutscenes. Her retirement from the show was mourned by fans, but she promised them that "I will never forget how I climbed to fame through their support."

The entire series was printed on VHS and DVD, however it is now out of print. It can sometimes be found going for obscenely high prices on Ebay.

Rouge's career on stage is becoming extensive. Even though most of her work nowadays goes towards her career at Sonic Team, she has vowed to never give up on the fans who first noticed her in her most acclaimed role as 'The Diamond Harlot', about a hooker with a heart of gold who lusts after gems, trapped working for a government agency, and always asking for her payment in gems.

When it comes to her career, Chunkie is known to be very generous, often offering her co-workers parts in up-coming movies.

Thanks to her flexibility and powers of flight, Chunkie often participates in sporting events. While many people suspect that her involvement in Sonic Riders was initially a huge confusion on her part, she claims that she gets as much of a thrill out of hover-boarding as anybody else who has ever participated. 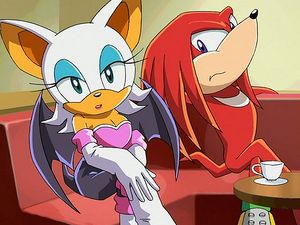 However much he denies it...

Some people believe that their mutual love of oversized jewellery makes Knuckles and Rouge rivals, or even lovers. This can't possibly be true though, since the only thing Knuckles has ever paid attention to in his life is the Master Emerald, which he is so posessive of, that he shattered it in order to keep Rouge from getting her hands on it. Rouge denies this, claiming that it was an act of nobility to stop Eggman getting it. In what she claims is her attempt to get his attention, she helped collect the pieces. However when she gave him the pieces, his only offer was a quick threesome.

Since Knuckles is supposed to be the Guardian of the world's largest jewel, the Master Emerald, Rouge has obviously taken something of a shine (ha ha) to him. She regulary visits him on Angel Island to keep him company and try to persuade him to turn the Master Emerald into the world's most garish engagement ring. He has thus far refrained.

While some believe that Knuckles must as a consequence be a homosexual just like half of the other citizens of Mobius, most documented evidence shows him trying to catch a peek, suggesting that he's just a cheapskate.

Recently Knuckles and Rouge have been seeing a tumultuous side to their curious relationship; while Silver the Hedgehog was pawing through Knuckles' garbage looking for something to pawn/eat, he found all 6 seasons of Chunkie the Streetwalker, which he promptly sold on Ebay. Puzzlingly, the buyer was called Superstrongredguy29875.

Chunkie first met Shadow while doing a tour of Prison Island signing autographs for fans. Shadow was breaking out at the time and made an attempt to molest her, which failed. He later saved her life while blowing up Prison Island, and made an enlightening discovery - that nobody sexually assaults Chunkie unless she wants them to. This kind of means that nobody can sexually assault Chunkie.

Chunkie seems to have a soft spot for Shadow the Hedgehog. She has repeatedly broken him out of prison despite knowing all about his many, many convictions as a murderer and sex offender. She also comes up with his bail-money on a regular basis, and sometimes breaks him out of prison. It's common knowledge that he spends many nights at Club Rouge for free. She is apparently helping him with his struggle against his heroin addiction.

She has publicly stated her appreciation for the many times he's attempted to sexually assault her, but claims that, "He's going to have to try harder than that."

“I thought the duct tape would scare her, but she chewed right through it.”

Chunkie gets along pretty well with Sonic, since he was the one to refer her to Sonic Team after meeting her while out on a casual jog through Night Babylon. Sonic has never been known to say anything bad about Chunkie, ever. She recently offered him a co-starring role in her movie The Diamond Harlot 3, but since he was working on Sonic the Werewolf at the time, he politely declined. As a result, the offer was picked up by Vector instead.