From Uncyclopedia, the content-free encyclopedia
(Redirected from Tentacle)
Jump to navigation Jump to search

~ Marin forgetting how to properly behave during a tentacle rape

So you're walking down a lonely dark street deep in the night when, suddenly, you hear a voice call out from a nearby dark alley: "Psst, kid! Over here!" Innocently, you glance over, your freakishly long pinkish coloured hair waves in the air and your ridiculously large girly eyes blink dubiously at the dark corner. Gingerly stepping closer, you squint your eyes and tug self-consciously at your deliciously small schoolgirl skirt and uniform, and you see it's just some seemingly helpless hobo sitting on the ground.

Naively, you walk over and ask, "What's wrong? Wow, you're sexy! Are you hurt?" when suddenly, the hobo asplodes into a massive tentacle monster with nasty green tentacles drooling with slime and mucus. Terrified, you turn around and bolt down the street/corridor while somehow losing your skirt in the process. But the tentacles are too fast and they grab you around your long womanly legs, creamy smooth thighs, lithe voluptuous waist, delicate soft arm, and it tightens around your vulnerable and slender throat, then the monster begins to slowly drag you back despite your terrified moans and futile struggles. "AAAAAAA!!" You scream, "A freakish hobo has grabbed me with slimy paralyzing tentacles! And the tentacles are slowly reaching up my unnecessarily short schoolgirl skirt and touching me in my naughty place! It's tickling me there! It's about to enter! What can I do? What will this horrible monster do to me? I need an adult! I need an adult!"

In other words, How do I avoid tentacle rape?"

"Don't tell anyone what I had to go through, or else I'll put coal in your mother's vagina!"

Tentacle monsters (Cumslurpus tentaclis, phylum Mollusca, class Cephalopoda) were once sea creatures, related to the octopus and the squid. (In fact, the octopussy, which is a cousin of the octopus and is named for the eight vaginas within its eight tentacles, is a direct ancestor of the tentacle monster.) Primordial tentacle monsters came out of the seas raping each other and whatever small critters they could get their appendages on, after the Chicxulub meteor impact scrambled their brains 65 million years ago, the dinosaurs having become newly extinct. No, Evolved. Their lust has continued unabated ever since. The tentacle monster's natural habitat is in Honshu, Japan, but monsters were exported to France during the Age of Disillusionment and the Age of Shark-Jumping, under Louis the Gloom King.

However, on Christmas Eve, 1983, the famous Jacobin Picard family (the forefathers of the future Captain Jean Luc Picard of the USS Enterprise) was having their chimney cleaned by a tentacle monster when suddenly a fat man - Santa Clause - began to slide down the chimney to deliver the presents. However, due to Santa's great girth, he became stuck in the chimney, and the tentacle monster, unsure of what the hell it was feeling, probed in curious confusion. Needless to say, Santa's red snow pants, Barney trousers, and chocolate thong did little to impede the squirming tentacles.

After pulling out a ham sandwich, three elves, a subordinate clause, and this article from Santa's asshole, the tentacle monster finally pushed Santa out through the chimney and onto the roof. Clenching in bitter humiliation and embarrassment, Santa trapped the monster's squirmy appendages in his butt (although other sources claim he clamped his butt because the hentai-izer may have donkey-punched Santa). Throwing himself on his sleigh, Santa commanded his reindeers to fly as far from this land as possible, before daylight could reveal to the French his humiliation. The monster eventually came loose and fell to the island of Japan.

And the rest is history.

Notice the colorful look of plant-rape. (Any likeness found to persons living or in castles is simply on purpose.)

If any of the above is true, then the Pokémon is also a tentacle monster.

Why you should avoid tentacle rape[edit]

If you’re a normal, healthy, breathing human being, it would be best to avoid tentacle rape. Why? Well, your body may enjoy it, but you are obligated to at least verbally protest having your insides get rearranged by shuffling tentacles. Generally, aftereffects of tentacle rape include the following rather horrible symptoms: 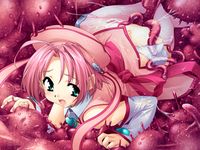 In short, if you look like a young, attractive, and skinny anime schoolgirl in your schoolgirl uniform alone by yourself in Japan, you can’t. Tentacle monsters will find their way into your vagina faster than you can gasp out in broken Romanized Japanese, “Toomete kudasai! Kono ookikute youma ni hai-tanai yo!” The only young, attractive, and slender anime schoolgirl in uniform that can and have avoided tentacle rape is Aoi Kuraichi. (Well, she always appears equipped with a bloody chain saw, so to say...)

However, this doesn’t mean you can’t futilely try to ward them off – it’ll prolong your suffering but make it much more enjoyable to the reader. Here are a few things to keep in mind when being tentacle raped.

Remember, just because a large tentacle monster is ripping up your vagina and doing everything from tearing out your uterus to impregnating your egg doesn’t give you, a woman, the right to be uppity. The monster hates that. 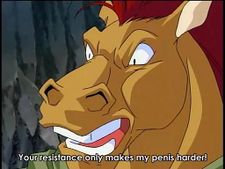 Too much resistance usually backfires.

Because you’re female, you’re automatically helpless against the awesome wrath of a tentacle monster and a male counter part after they have touched you in your naughty place.

Seriously, just lie back and cry helplessly once you're caught.

How does it rape you?[edit]

Before they touch you on your vagina (your instant weakness point), you can attempt to fight the tentacle monster. When doing so, remember to:

Avoiding tentacle rape (for the rest of us)[edit] 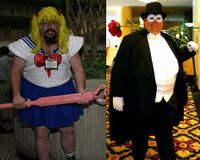 If you look like this, you're safe from tentacle rape (as well as most other forms of sex).

What to do after tentacle rape[edit]

So it happened. That tentacle monster raped you, impregnated you with his devilish offspring, and left. You're screwed, and can't do anything. However, we have some tips on how you can either make this a better experience, or just pass the time and make it go by faster.

Featured HowTo: Article
Featured on the 30th of October 2010
This HowTo has been featured in the HowTo namespace. Want to know HowTo get your own HowTo featured? Just write something good.
Retrieved from "http://en.uncyclopedia.co/w/index.php?title=HowTo:Avoid_tentacle_rape&oldid=6032309"
Categories: