Why Televisions Are Hard To Turn On[edit]

Well, for starters, there's a plethora of television sets available. You can go for the extremely kinky simple kind that used the ancient tubes, or you can go for a modern plasma screen HDTV with Dolby Surround Sound. Of course, it also all depends on the accessories with the TV, largely because the TV cannot have sex unless it has a SexBox or a DVD player but most men typically go with the classic VCR plugged into it. Women might go for the SexBox namely because the controllers can vibrate. 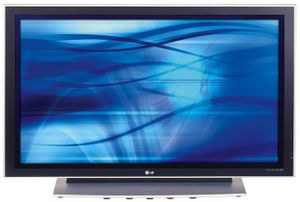 An aroused plasma television waiting to completely dominate and sexually own your ass. You know you love it.

Like any good complicated electrical system, the Television has a safe, slightly unsafe, and incredibly risky modes, though all depending on your television... Pay attention here!

For all televisions that come with remote controls, simply rubbing the remote on your bare crotch is a good way to get your television's interest, but be sure you've actually got it on... and be sure to watch an infomercial while trying this, for all that talk of "shipping" and "handling" will eventually get your television to become sexually interested in you. Of course, this takes weeks to work, so some often opt for the Slightly Unsafe Method.

The slightly unsafe method is where things get slightly complicated. 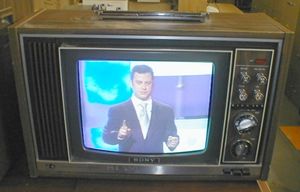 A really old, really small tube television for a really old really small person. Or is it? Just look at all those knobs and dials and spinny things...

If you're trying to turn on a plasma television, then your best bet would be to take the television down off the wall or the table and give it a few lap dances on top, in a position resembling a cowboy/cowgirl riding a horse. Of course the television must have power to it for it to be aware of your advances. You run a risk of the television becoming turning itself off due to lack of interest. Plasma televisions are very fickle and once you've done something, they don't want it done again, after all, they have access to all the porn channels unrestricted. Sometimes, you might play with the DVD player instead for equal results.

If you're trying to turn on an analog television, as in one of those large plastic boxes with a glass screen. Due to their weight and lack of maneuverability, it is advised that you start playing with the VCR instead. If you don't have one, search your local junkyard to get one. Once you have your VCR, start ejecting and pulling out the old VHS tapes and putting them back in. This is a good way to turn on your analog television, but you run the risk of it rejecting you if it doesn't like you enough and firing that big plastic cassette right into your forehead.

If you're trying to turn on one of those tube televisions, then the best way is to get naked, start playing with all the dials and knobs while licking the screen and if you're a woman, press your breasts against the screen. It'll get you bonus points in turning on your television. Of course, this doesn't work as some of those older televisions can be very old fashioned and so they may refuse you a dozen or so times. Although the tube televisions can be the most rewarding as those tubes have plenty of good uses. This is a favorite for women.

Depending on what method you used, Television sex can vary to some degree... But here will be explained Safe Television Sex

If you are a complete moron and want no excitement or pleasure in your life, you chose the Safe and Slightly Unsafe methods, didn't you? You suck at life and therefore deserve to have your television use you like a two-bit whore. Televisions are very dominating types of machines and they can be extremely demanding.

If you were smart, you actually got the titanium condom and decided to try out the Incredibly Risky Method out on your television and you got style, man! Go for it by all means! And remember, DVD players are extensions of your television, use them! So go slap some plastic and silicon, you've earned the right to own that television!