Turning on a computer is no easy task. Turning on a human being is one thing; humans are easily aroused. Simply making out usually does the trick. But getting your computer sexually aroused is something completely different. It takes a tremendous amount of time, effort, concentration, commitment, and in some cases, blood.

Why computers are hard to turn on

An example of the type of frustration you will face while trying to turn a computer on. Most computers actually find this kind of gratuitous violence sexually arousing.

Most computers are inherently bisexual. However, there is some difference in which gender some computers seem to prefer. A recent study found that most laptops, especially Macintosh ones, are more feminine, therefore men have an easier time getting laptops turned on than women do. However, most Windows computers, especially Windows Vista, are more easily aroused by women, especially lesbian women. However, regardless of your gender, you are bound to have to work very hard to get your computer turned on. It will take several days to get your computer even remotely interested in you. There are records of people taking weeks, and still being rejected by their computers. In one instance, an incredibly attractive woman gave her computer a lapdance for an entire month, and at the end of the one-month lapdance she got no reward other than an error message saying "this computer is not responding."

There are many different methods that can be used to get your computer aroused. However, be warned that the ones that take the least time are often the ones that involve disturbing or degrading fetishes that will most likely leave you scarred for life. 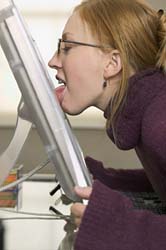 A woman attempting to turn her computer on.

The safest way to arouse a computer is to gently stroke the keyboard in a circular pattern, while pressing the mouse of the computer against your crotch and rubbing it rhythmically, running your tongue up and down the computer screen as you do this. It usually takes from five to six weeks to get any sexual response from your computer using this method, which makes it very unpopular among some people. "It's just too softcore." says Micheal Lubricant on the subject, "computers are into kinkier, more creative stuff than this. I mean, I'm sure this method would work fine on a bookcase or a TV even, but computers are too dirty to be aroused by this generic stuff. This might have worked on a 1992 IBM, but today's machines just aren't into this stuff anymore. You have to take risks if you want to score with your computer."

Computers want unconventional stuff in their sex lives. It takes a lot of creativity to get a computer turned on in this day and age. Computers are really into the spaces in between the toes, the armpits, and other bodily crevices that are normally left unexplored. A more reliable method to get your computer aroused is to blindfold yourself, cover yourself in vaseline, then rub the computer's mouse all over your body. This is the method most commonly used by people who wish to have sex with their computers. This is because this method doesn't take as long as the Safe Method, and doesn't involve needles like the Incredibly Risky Method.

The only sure-fire way to turn on a computer is to use this method, but most people are unable to bring themselves to do it, since it involves sharp objects. Computers are very hardcore, and it often takes bloodshed to get one really, truly aroused. This method varies greatly, having a number of sub-methods, but most do involve the slashing of the wrists with shards of glass, and some extreme methods also involve inserting needles into the reproductive organs. This method always arouses a computer, making it an extreme last resort for those who tried all other methods and failed.

Having sex with a computer is an experience sought after by many sexual thrill seekers. Most people go through their entire lives without experiencing this sensation, but those who do very seldom go back to having sex with people. 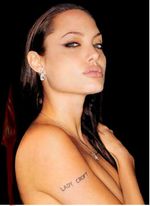 Though she may have gorgeous lips and supple breasts, Angelina Jolie is downright unappealing when compared even to a Windows computer

"It's the most glorious experience anyone could ever have," says Micheal Lubricant, who has engaged in sexual intercourse with a world record 50 computers, "After experiencing an orgasm while simultaneously being electrocuted, you'll never want to even look at a woman again. It is so unbelievably gratifying, you'll just want more and more, and you'll look at Angelina Jolie and you'll say, 'Gross! I bet she couldn't shock me with 900 volts during sex! She's just nasty!', but then you'll see Windows XP sitting on a shelf in a department store and you'll say, 'Now that is hot stuff!'"

It is important to take certain precautions before engaging a computer in sexual intercourse. Computers are notorious for being infected with a variety of extremely dangerous sexually transmitted diseases. Genital trojan horses and genital computer worms are common in many computers. If a computer transmits either of these viruses to a human, it may result in insanity. Always wear a condom and install the most up-to-date anti-viral software on your computer to prevent infection. Also, there is a rare chance of actually getting a computer pregnant, which can result in all sorts of hideous hybrids. Micheal Lubricant reportedly has an illegitimate daughter with a computer screen for a face. This can be easily prevented by installing a firewall on your computer. If the computer in question is a Catholic, as the majority of IBM machines are, they will refuse to use any form of protection, and thus having sex with this model of computer is extremely risky.

Featured Article  (read another featured article)
Featured version: 18 June 2007
This article has been featured on the front page. — You can nominate your favourite articles at Uncyclopedia:VFH.