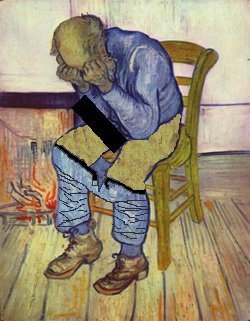 The most famous painting in Van Gogh's Wangst series

Those who suffer from wangst are usually teenage males who, through one way or another, find themselves single.

Wangst as an ailment is not always easy to spot. Similar to anxiety in the sense that it can cause a person to become irritable, nervous and/or desperate suddenly, wangst sufferers will quickly become irritable towards: couples who are “expressing their love” or girls who reject them. A common theme, however, among wangst sufferers is a misogynistic stance.

Those that believe they might suffer from wangst should look out for:

Whatever the case may be they have agreed on several key causes of wangst; including:

Experts have also agreed that certain factors can put an individual at a greater risk of suffering from wangst. Those include, but are not limited to:

*It should be noted that although the most common age for wanxiety is between 16 and 26, there have been several cases of sufferers as old as 42.

Those who suffer from wangst generally recuperate within one to two weeks after finding a partner.

Other cures may include:

The suggestions of joining a monastery or enlisting in the army should be administered to light to medium sufferers of wanxiety only. Those that suffer from heavy to excessive bouts of wangst have been known to find ways to circumvent their desires. This has led to both law suits and unwanted generalisations for both institutions.

Starting a hobby as a way of fighting wangst has proven successful over the years. It follows the adage that “idle hands are the devil’s playground” and allows a sufferer to concentrate on something other than their crippling loneliness. Likewise with the first two suggestions, heavy to excessive sufferers have been known to circumvent their desires, and as such, should be monitored at all times. The handling of livestock, in this situation, is a past time that should be avoided.

The problem of wangst is not an altogether straightforward affair. The best cure, as stated above, is to find a girlfriend. This causes a paradox unto itself.

As symptoms of the condition include misogynistic tendencies, the sufferer, while looking for the best cure, is repelling the one thing that can save him. For this reason, it isn’t until some time that a sufferer can even get close to finding a partner. It requires a patient person to see through the wanxiety, to truly understand the wangst sufferer.

Such people, however, are few and far between, and as such, a wangst sufferer will increase their wanxiety every time they are rejected, creating a vicious cycle. A perspective partner is repulsed by the symptoms of wangst, rejects them, (unwittingly) intensifies the symptoms or wangst, setting the wanxiety sufferer up for even more rejection and therefore more wangst etc.