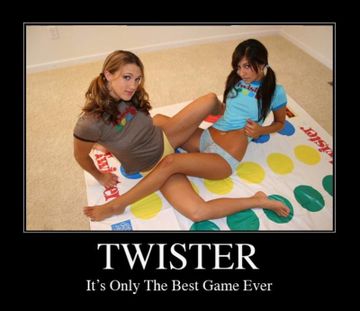 These girls are the hard core Twister type. Shall we go play?

The game was invented to allow hormone-driven crazy teens to surprise-sex each other with the excuse of "Oops! My pants and undergarments somehow are now on the floor and I'm engorged!". This usually happens, to the delight on onlookers, because the game and its mysterious "spinner" literally decides every move. Even those that can lead to pregnancy or death. 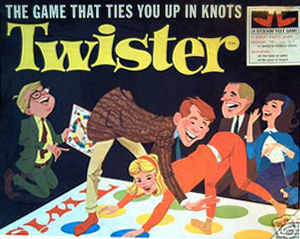 Twister commonly precedes various tainted activities. Here we see Mr. Harrison getting into the position to thrust his member into Lucy's mouth and at the same time preparing to eat her pussy. Additionally, the two men in the back are about to rape the brunette to the right.

The game's instructions are demanding, especially if you're a member of the elderly class (over 25). The game contains multiple parts. First there is the spinner. Second, there is the mat on which the sexual and non-sexual ruckus will occur. Thirdly and lastly, there is the box where player's store this fun-madness and hide their stash from their parents.

The game itself is as hard and difficult as the instructions imply. When a color and body part is named you have to move that part onto that colored dot. You should be careful because your spine can only twist so much and any more requires traction and home schooling.[5]

Strip Twister is the most fun version of Twister. Whenever one messes up, instead of losing, the player must remove an article of clothing. When one becomes totally naked, face it, everyone is a winner.[6]

Rhonda was your average secretarial student, a bright eyed co-ed wishing for a future filled with several husbands and covertly drained bank accounts. She was the apple of her daddy's eye, the ulterior motive of the class of '11, and the dashing-through-the-snow girl of Ames, Iowa. She went happily along with her oblivious life until her world came crashing down, all because she attended a party at a friend's house and had too much to drink. Rhonda had always loved a good party, and good parties loved her.

Rhonda arrived and a cheer went up from all the men and unattached women, and she greeted everyone with a kiss and a handjob. As the evening wore on, and the whiskey and sedatives were drained, someone had the bright idea to play Ultimate Twister. Another cheer went up, as by this time even the attached women were three sheets to the wind and taking turns blowing the pizza delivery boy in the corner. Even the police who'd been called to quell the noise had joined in the fun, and rode the host like a herd of bucking broncos with badges. Yet when that cheer went up everyone stopped what they were doing and rushed into the living room. They had heard on the internet about Ultimate Twister, and wanted to join in the fun.